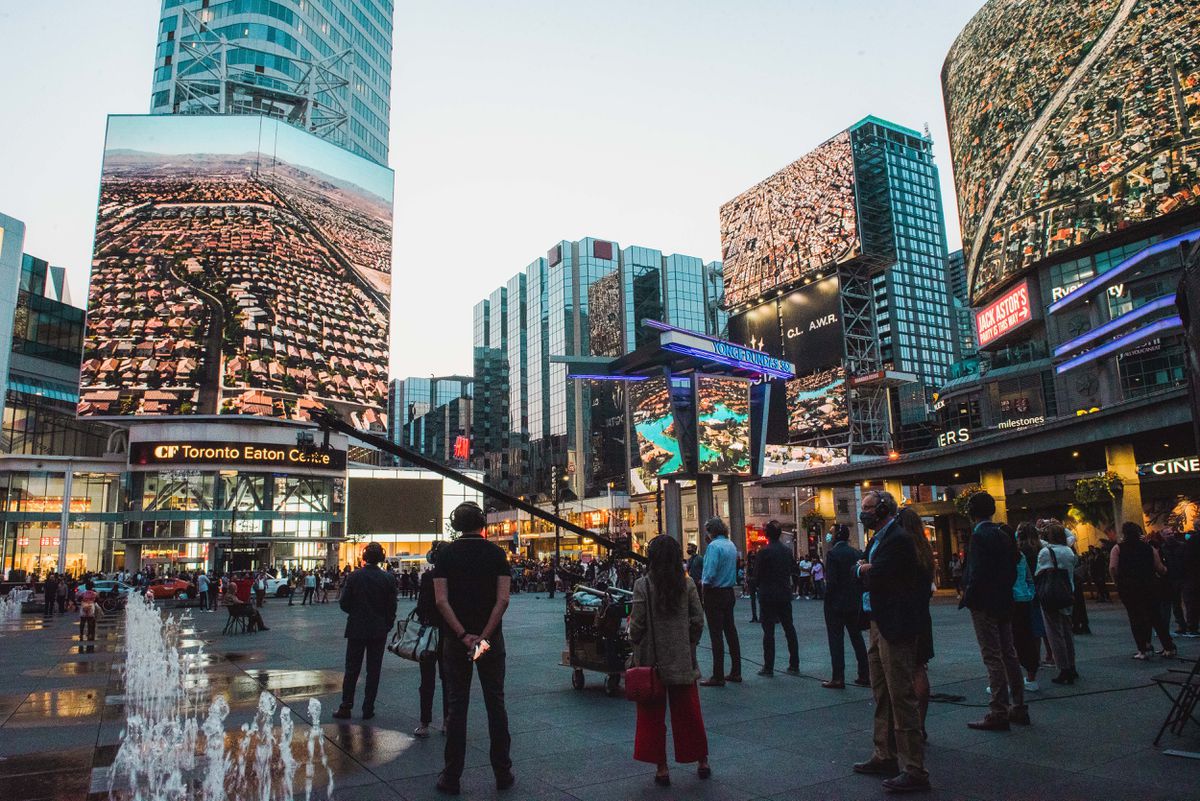 Luminato Festival Toronto is seriously making a comeback this week after a few pandemic editions — and it really does feel like a proper reboot of the interdisciplinary arts event.

There’s that modified new name that, hey, actually clarifies where the festival that was originally designed to lure tourists to the city takes place. Then there’s the fact that it’s now completely headed by Artistic Director Naomi Campbell, who was appointed to that position in 2018 but first had to execute on plans laid out by predecessors.

And while this edition of Luminato – which runs from June 9 to 19 – is modest in size compared to previous editions, that only means the festival can really show what its top priorities are. Here are three highlights from the tantalizing lineup for 2022.

In the wake of progress

Renowned Canadian photographer Edward Burtynsky goes bigger than ever by taking over the immense screens of Yonge-Dundas Square with this cinematic cry heart about the climate crisis.

The World Premiere is a free public event featuring a mix of stills and film, accompanied by a score by Phil Strong, and tells “the epic story of humanity’s impact on the planet”; it cycles every 30 minutes from 8pm to 11pm on Saturdays and Sundays, briefly turning an advertisement-filled plaza celebrating consumerism 24 hours a day into a place to reflect on its effects. Later, an immersive (and ticketed) version will be available to tour at the Canadian Opera Company headquarters from June 25 to July 17.

What you won’t do for love

This piece of reality theater from the acclaimed Why Not Theater troupe brings environmentalists and life partners David Suzuki and Tara Cullis on stage with a younger real-life couple, Miriam Fernandes and Sturla Alvsvaag, to discuss how we can extend the love we have for each other on the planet. This project, directed by Ravi Jain, was on my list of “theatrical experiences to look forward to in 2021 (that will happen somehow)” – and well, I’m relieved that it’s finally happening live, as I said it would happen, albeit a year later than I expected.

Festivals like to proclaim that they are interdisciplinary – but many festival-goers silos themselves nevertheless, attending only music, dance or theater events or art exhibitions. What excites me about Luminato’s Woodbine Weekend is that not only will you find an exciting mix of music groups from around the world at this free two-day event – such as Eurovision folktronics contenders Go_A from Ukraine, and violinist/singer Sudan Archives from the United States – but you will also encounter theater (Necessary Angel’s audio drama the big fire) and art (installation by Oluseye Ogunlesi) black ark) on the same site.

While I visited the Festival TransAmériques in Montreal (which ends this week) many times over the years I’ve never made it to Carrefour international de théâtre, its sister festival in Quebec City that takes place at about the same time every year.

The two festivals mostly share the same programming – and indeed you can catch up on shows that just made waves in Montreal, like on holoscenesan incredible array of underwater performances, and The History of Korean Western Theatera documentary theater performance that explores how South Korea was overrun with Shakespeare in Quebec’s capital this week.

Other performances worth seeing at the Carrefour before it ends on Sunday include: Stories and legendsa new play on adolescence from freaky French playwright and director Joël Pommerat, and Cliff Cardinal’s The way you like it: a radical retellinga surprising performance that I wrote about at the end of last year.

Just because the pandemic declining doesn’t mean digital achievements are over.

FOLDA (aka the Festival of Live Digital Arts from Kingston) has supported this emerging artistic practice before, and continues to do so today – with the latest edition taking place June 8-11.

Intriguing works on the bill include a new VR version of You should have stayed at homeTommy Taylor’s performance on the disturbing events that took place at the G20 in Toronto in 2010.

Nova Scotia’s Eastern Front Theater starts today a packed edition of the Stages Theater Festival. Only valid until June 12th, the lineup includes Cyrano de Bergerac† in a 50-minute street theater version, and #IAmTheCheese† an up-to-date adaptation of Robert Cormier’s 1977 novel for young adults I am the cheese by Dartmouth playwright Josh MacDonald.

Just got back to Toronto from three days at the Stratford Festival – and you will find my reviews of Hamlet and Richard III (and the musical Chicago) online.

But Stratford, Ontario, isn’t the only place in Canada to see Shakespeare in the summer. Bard on the Beach in Vancouver is finally back this week with A Midsummer Night’s Dream (June 8 to September 24) directed by Scott Bellis, while Winnipeg’s Shakespeare in the Ruins returns to play last week with an Ann Hodges-directed production of Much ado about nothing (until 2 July).

This week I’m hanging out in Toronto to check out some of the Luminato events mentioned at the beginning of this newsletter. I’m also watching the world premiere of Fatuma Adar’s new musical Dixon Road, at the High Park Amphitheater (until June 19); and the latest revival of that huge Canadian hit 2 pianos 4 hands at the Royal Alexandra Theater (until July 17). Look for my reviews later this week and early next week.

Stay informed with the weekly newsletter from Nesttruck on Theater. Sign Up Today.