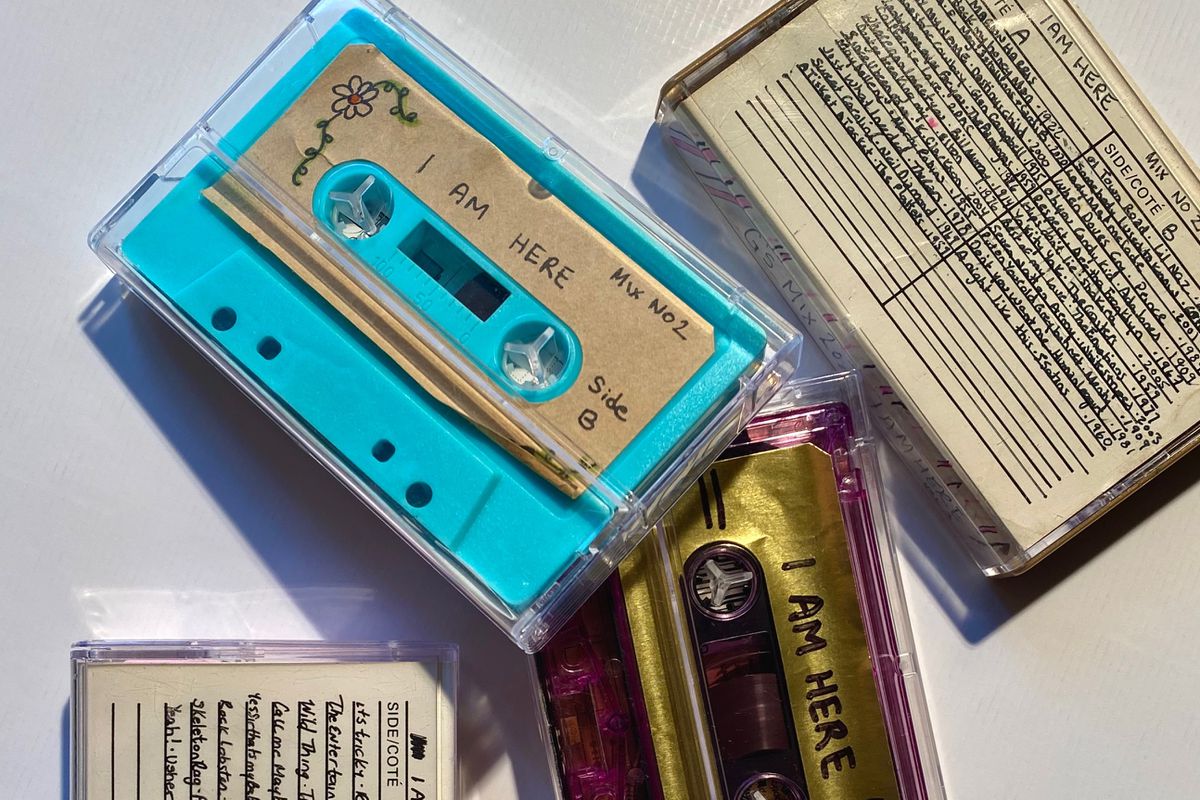 At the Art Gallery of Ontario, the Cyndi Lauper hit Time after time plays on a boombox. The installation is called Mixtapespart of the multimedia I Am Here exhibition that looks at music and home movies as vehicles for personal reflection. “I have a suitcase full of memories,” Lauper sings, “that I almost left behind.”

The Mixtapes part is the creation of Glynnis Grant-Henderson, a Toronto music enthusiast who contributed a dozen tapes of danceable music – from ragtime hero Scott Joplin to wild thing garage rocks the Troggs to rapper Doja Cat. There is also a collection of cassettes and journal entries documenting her 2018 road trip to small record stores across Canada.

Do you remember cassette tapes? In 1983, the year Time after time was released, cassettes overtook vinyl as the most popular music format, according to the Recording Industry Association of America. More convenient and portable than vinyl, tapes can be played while driving or, with a Sony Walkman, walking. People could also easily record their own music on cassettes. By the end of the decade, global annual sales were 83 million.

Then, thanks to the advent of the compact disc (and later digital downloads and streaming services), cassettes went a long way from decline leading to their irrelevance as a music delivery system.

Until now. Although the total numbers are quite low compared to their peak in 1989, music cassette sales in the United States have increased by double digits in recent years. It’s no different in the United Kingdom, where sales doubled between 2019 and 2020, according to figures from British Phonographic Industry.

So the hipsters have a new niche musical toy. But why is the rewind button being pressed now?

To explain the cassette renaissance, it’s tempting to use some of the same factors driving the current revival of vinyl sales: consumers seeking a tactile relationship with their music; a preference for analog over digital; the veil of nostalgia. But the sonic quality of cassettes, with their hiss, is inferior to that of vinyl. The artwork is on a much smaller scale. And just try to find high-quality equipment to play today’s stuff.

“None of our current suppliers have cassette decks anymore,” said Danu Mandlsohn, manager of premium Toronto audio retailer Bay Bloor Radio. “The last time we sold them was in the early 2000s.”

The quick answer to the cause of the cassette miniboom: Tapes are cheaper.

“We can supply 100 cassettes for $3 to $5 per tape,” said George Frehner, the president and owner of Analogue Media Technologies (aka. duplication.ca), a media factory and printing company in Toronto. “The cost of pressing a vinyl record starts at about $20.”

As a result, Billie Eilish’s latest album, Happier than eversells for $19 on cassette at Amazon.ca, compared to $39.99 for the vinyl version.

Another factor that favors tapes over plates is lead time for manufacturers. According to Frehner, it can normally take 22 to 25 weeks to ship vinyl products, which does not make LPs, but handles brokerage agreements with press plants for its customers. Cassette orders can usually be completed within a month.

The increase in cassette sales is also due to increased demand from major music labels. Ten years ago it was underground bands and bedroom musicians who most often released tape recordings; these days the superstars are also going analog.

“Today we shipped 8,000 cassettes of a Bjork album and 2,000 Mac Miller tapes,” Frehner said. “There’s no sign of this stopping — it’s just getting bigger.”

As for the nostalgia driving today’s analog wave, nowhere is that sentimentalism stronger than when attached to the beloved cassette subgenre, the mixtape. Find an old one in a box and you’ll be instantly transported to a bygone era of your life – probably with unfortunate haircut choices – even before you stick it in a deck and press play.

“The numbers are in your own handwriting,” said Mixtapes creator Grant-Henderson. “It’s very tangible and it’s definitely a lot more romantic than a Spotify playlist.”

Grant-Henderson, 32, was born when the cassette tape was just beginning to decline in popularity. She remembers making mixtapes with her sisters as a child and running to the tape deck to hit the record button when a great song came on the radio. The cases were decorated with glitter and embellished with nail polish doodles.

“It’s one of our family’s happiest memories,” she said.

It’s not uncommon to hold up pop culture as a mirror of one’s emotional state. Grant-Henderson believes the mixtape resonates more than creating a playlist on a streaming platform because you’re actually listening to the song as you tape it, rather than dragging and dropping a song across a laptop screen. “It’s a physical problem for you,” explains the panel text for the AGO exhibition. “There’s no way you can avoid feeling whatever you were feeling while listening to that song and hitting a record on the tape deck.”

The Mixtapes project started a few years ago with something Grant-Henderson called The Mixtape Manifestoa seven track music collection by Elton John – Philadelphia Freedom† – and others. An accompanying short story line worked for her as a form of music therapy, while serving as a love letter to the band format.

Her 2018 odyssey took her to Batchawana Bay, Ontario’s Oosik Records (itself described as the world’s smallest record store) and on to Winnipeg’s Into the Music, Saskatoon’s the Vinyl Exchange, Vancouver’s Neptune Records and Victoria’s Vinyl Envy. A copy of The Mixtape Manifesto was on the counter of every store she visited, free to anyone who wanted it.

“It just seemed like the right thing to do,” she said.

She drove a dilapidated 2002 Honda Civic and stopped by a total of 25 stores. Some of them have since gone bankrupt. And six months after the trip, the Civic was a total loss in an accident. “It served its purpose,” Grant-Henderson said of the car.

The cassettes? They survived to play another day.

Signing up to The Globe’s art and lifestyle newsletters for more news, columns and advice delivered to your inbox.