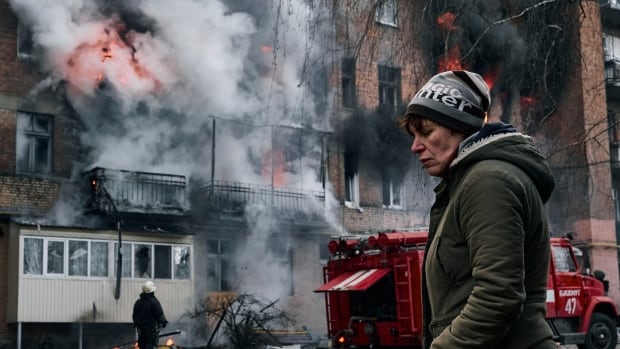 Russian forces attacked settlements in eastern Ukraine from the ground and air, officials said on Thursday, in support of the Kremlin’s apparently downsized ambition to secure only most of the Ukrainian land it claimed in the war .

Fighting took place along the entire demarcation line in the Donetsk region.

Ukrainian President Volodymyr Zelenskyy’s office said on Wednesday that 11 civilians were killed and another 17 injured in Ukraine.

Russian President Vladimir Putin has made conflicting statements about the goals of the war since his invasion on February 24, but it is now clear that the goals include some expansion of Russia’s borders, contrary to comments made at the beginning of the “special military operation’. when he said that Moscow’s plans did not involve the occupation of Ukrainian land.

Russia is no longer talking about changing the government of Ukraine

The Kremlin said Thursday it is still determined to secure at least most of the parts of eastern and southern Ukraine it has claimed as its own, but appears to be giving up on other territory in the west and northeast that Ukraine has reconquered. a steady reversal of early Russian gains.

The Kremlin is no longer talking about trying to force a change of government in Kiev.

Putin vowed on Thursday to fight regardless of the West’s reaction.

“It is enough for us to move and there is a lot of noise, chatter and shouting all over the universe,” Putin said. “It will not prevent us from fulfilling combat duties.”

He described a series of Russian attacks on Ukraine’s energy facilities and other key infrastructure as a legitimate response to a bombing of a key bridge connecting Crimea to the Russian mainland, and other attacks the Kremlin said had been carried out by Ukraine. Putin also cited Ukraine’s move to cut off water supply to Russian-controlled areas in eastern Ukraine.

“There is now a lot of noise about our attacks on energy infrastructure,” Putin said during a meeting with soldiers whom he decorated with the country’s best medals. “Yes, we are doing it. But who started it? Who hit the Crimean bridge? Who blew up the power cables connected to the Kursk nuclear power plant?”

Putin particularly praised the performance of the Russian air force as “highly efficient”.

Putin and Peter the Great

On Wednesday, Putin said Russia had already achieved a “significant result” in acquiring “new territories” — a reference to its annexation of four partially occupied regions in September that Kyiv and most members of the United Nations condemned as illegal.

Putin warned that the war could go on for a long time, saying Russia had made the Sea of ​​Azov its “inland sea”, now bordered by Russia and Russian-controlled territory in southern Ukraine, including Crimea.

He said this was an aspiration of Peter the Great – the 17th and 18th century warrior tsar to whom he has likened himself in the past.

Zelenskyy says his troops will eventually expel Russia from all conquered territory, including the annexed Crimean peninsula that lies between the Black Sea and the Sea of ​​Azov.

Russian naval forces shot down a Ukrainian drone over the Black Sea on Thursday, said the Russian-installed governor of Sevastopol, a key port and the largest city in Crimea.

Earlier this week, twin strikes against air bases deep inside Russian territory damaged Moscow’s reputation and raised questions about why its defenses failed as attention turned to the use of drones in the war between neighbours.

Reuters was unable to immediately verify battlefield reports from both sides.

A flurry of Russian diplomatic and military activity in Belarus in recent weeks has reignited fears that Moscow is pressuring its ally to become more involved in the war in Ukraine.

President Alexander Lukashenko, who relied on Russian troops to put down a popular uprising two years ago, has allowed his country to serve as a staging post for Russia’s invasion of their common neighbor.

So far he has kept his own army from getting involved, but in recent weeks there have been increasing signs of involvement in Belarus from Moscow.

Visits with prisoners of war

Meanwhile, the International Committee of the Red Cross announced on Thursday that its representatives have visited Ukrainian prisoners of war on the Russian side. International observers were previously denied access to see them.

“Last week, the ICRC conducted a two-day visit to Ukrainian prisoners of war, and another is taking place this week. Visits to Russian prisoners of war took place at the same time,” the organization said in a statement. The Red Cross checked the conditions of the prisoners, gave them books, personal hygiene products, blankets and warm clothing, and contacted their relatives.

“We can monitor how POWs are treated and provide their families with the latest information. I expect these visits will lead to more regular access to all POWs,” said ICRC President Mirjana Spoljaric, without commenting or providing details about POW treatment . prisoners.