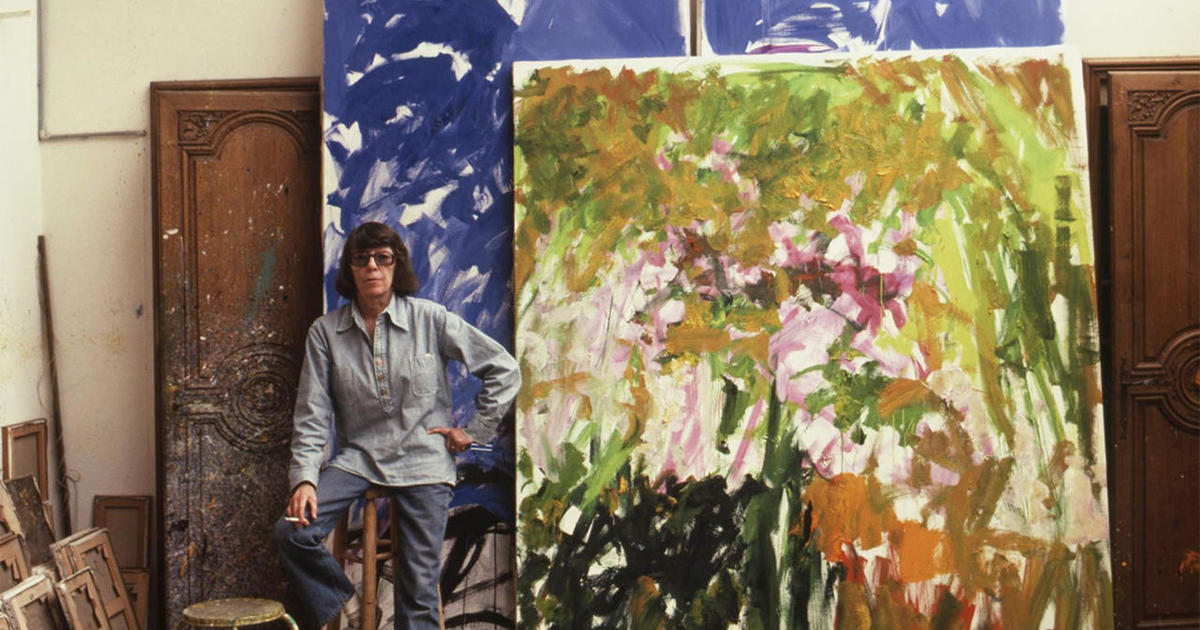 “If I hadn’t had to fight, I might have quit,” artist Joan Mitchell once said. ‘I don’t know. But I doubt it.’

Mitchell’s work may have sprung from struggle, but there’s no question that she was able to triumph and create paintings that are now considered 20th century masterpieces.

And Katy Siegel, who co-curated an exhibition of Mitchell’s work for the Baltimore Museum of Art, says it is in part an attempt to place Mitchell in the pantheon of other abstract expressionists (such as Willem de Kooning, Jackson Pollack, Grace Hartigan and Lee Krasner) who stormed the New York art scene in the 1950s. “Her work is strong, muscular, declarative, aggressive,” Siegel said. “It’s everything Abstract Expressionist thought it wanted to be.”

Correspondent Rita Braver asked, “She was one of many important female artists exhibiting at the time. Yet it seems like it was the men who got all the attention. Why was that?”

“Well, it’s not rocket science to figure out why; it was just old sexism,” Siegel replied.

Yet Joan Mitchell always charted her own course. She was born in 1925 to a wealthy family in Chicago – her father was a doctor and her mother was an editor of the poetry magazine.

“It seems she developed an interest in both art and poetry early on,” Braver says. “And When She Was 11” years old, her father told her to pick one? Is that true?”

“It’s true. And he said, ‘You have to be great to be good at something. You can only do that a thing.’ And she chose.”

Mitchell would never look back.

Although her early work was figurative, by the time she was 25 and living in New York she was increasingly abstract: “She paints ‘Figure and the City’ in 1950, and she said, ‘I knew it was my last figure. ‘” said Siegel. “And it was.”

In 1959 Mitchell moved to Paris, where she made increasingly larger works. A decade later, she bought an estate in the village of Vétheuil, where the French impressionist Claude Monet had once painted.

Braver asked, “How has her work evolved by then?”

Siegel said, “First, the idea that she uses all the colors, the full spectrum, is really developed here. And a really great use of white that just brightens the painting.”

“Would she have agreed if I said it’s beautiful?”

“Yeah, she wasn’t afraid of beauty, unlike most people of her generation,” Siegel said. “And as she said, ‘I’m not from the make-it-ugly school.'”

Mitchell was described as both charming and cranky. Her love life was tumultuous. She was a heavy drinker and smoker and suffered from depression. And, often traveling between France and the US, she said she always felt like an outsider, as she told documentary filmmaker Marion Cajori in 1992: very pejorative. And here I am a Frenchie, because I have color, and decorative, Ooh ooh! So you can’t win,” she laughed. “And besides, I’m a girl, a woman, a woman!”

However Mitchell thought she was being seen, artists like Stanley Whitney, 20 years her junior, acknowledge her influence. “She’s a painter,” he said.

Braver asked, “What did you want to learn from her?”

“Freedom,” Whitney replied. “And I wanted the color, and I want the space, the timing of it, the rhythm of it.”

And he says works like “Sunflowers” show how proficient Mitchell became: “It’s magical how much she gets done just by making a mark. She knows so much about painting that she has total freedom to do whatever she wants. “

Siegel said: “Even though she died early, you know, that’s almost five decades of painting, but also the model of a life lived incredibly intensely. If art was the center of her life, life really is the center of her.” art.”