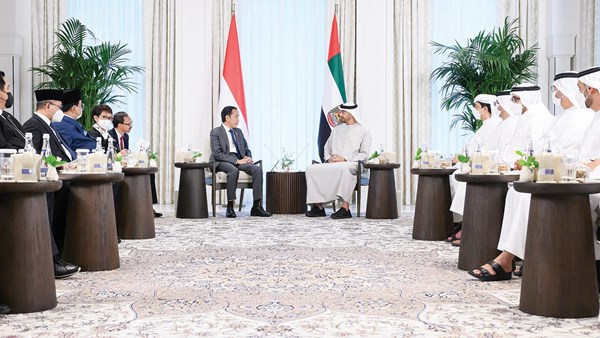 His Highness Sheikh Mohamed bin Zayed Al Nahyan, president of the state, “may God protect him”, yesterday received Joko Widodo, president of the friendly Republic of Indonesia. His Highness, the President of the State, welcomed the Indonesian President at the meeting, which took place at the Beach Palace, and expressed the hope that the visit would provide a strong impulse and herald a new, more vibrant and stronger phase in bilateral relations in several areas.

His Highness the President of State and the President of Indonesia discussed friendship relations and various aspects of joint cooperation in the investment, economic, trade and development pathways that support sustainable development efforts and the continuation of progress and prosperity in the two countries.
The two sides also exchanged views on all regional and international issues and developments of concern to the two countries.

His Highness said relations between the UAE and Indonesia are growing and great progress has been made in recent years, emphasizing the UAE’s determination to take these relations to a higher level of cooperation and joint coordination, noting that the signing of the Comprehensive Economic Partnership Agreement between the UAE and the Republic of Indonesia today moves in this direction, marking a new and important shift in the course of the economic and development partnership between them, and expresses the strong will to exploit all available opportunities invest for the benefit of their peoples.

His Highness praised President Joko Widodo’s role in strengthening relations between the two countries in recent years and his enthusiasm to move them forward in various fields, in addition to his enthusiasm to make the preparation of this agreement a success as soon as possible. referring to the close historical ties that unite the UAE and Indonesia.

For his part, His Excellency Joko Widodo praised the depth of the relations between his country and the UAE and the common human values ​​that unite them based on their belief in the centrality of coexistence and cooperation in achieving prosperity for peoples, with which he expressed his happiness at the continuous development these relations show at all levels.

He also appreciated the efforts of His Highness Sheikh Mohamed bin Zayed Al Nahyan and his role in raising the level of relations between the two countries to an advanced stage that meets the aspirations of their two friendly peoples, and expressed his desire for increased cooperation and fruitful investment and economic partnerships that benefit the two countries and take their relations to new horizons of growth and prosperity.

It was also attended by the delegation accompanying the host president, including His Excellency Retno L. B Marsudi, Minister of Foreign Affairs, Prabowo Subianto, Minister of Defence, Zulkifli Hassan, Minister of Commerce, Eric Tohir, Minister of State Enterprises, Pramono Anung, Minister and Cabinet Secretary, Bambang Susanto, Head of the Nusantara Capital Authority, Reza Wirakusuma, Chairman of the Investment Commission of Indonesia, and Hussain Bagis Ambassador of Indonesia to the United Arab Emirates, and a number of senior officials in Indonesia.