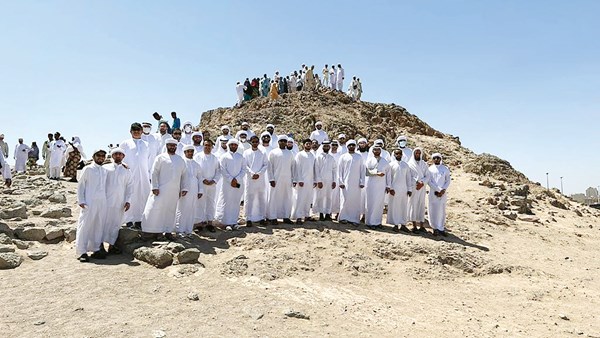 Yesterday, the official Hajj delegation of the Government of Dubai, organized by the Ministry of Islamic Affairs and Charitable Activities in Dubai, visited the historical and sacred sites in Medina.
Hilal Al-Faili, the media officer of the official mission, said: All the pilgrims of the Dubai delegation are well, praise be to God and His grace, and we have arrived in the safety of God in the land of Medina.
He pointed out that the visit included historical sites that testify to the events that took place during the era of the Messenger, may God bless him and grant him peace, and the Companions, may God be pleased with them.
He added that the holy places in Medina were also visited, such as the Quba Mosque and performing the two rak’ahs of prayer in it, in honor of the Messenger of God, may God bless him and grant him peace, the mosques of the Companions, mount Uhud, the archers, the burial places of the Companions, the martyrs of Uhud and the master of the martyrs Hamza, the uncle of the Prophet, may God’s prayers and peace be upon him, and the rest of the monuments and monuments with history.Broad than mentioned in the biography of the former. He explained that the mission will stay in Madinah and then leave for Makkah Al-Mukarramah today to perform the rites of the Umrah, which is the Umrah of coming to prepare for the obligatory rituals of the Hajj. It is noteworthy that the official Hajj delegation of the Government of Dubai for the Hajj includes 70 pilgrims who are employees of the Government of Dubai and who have never performed the Hajj.