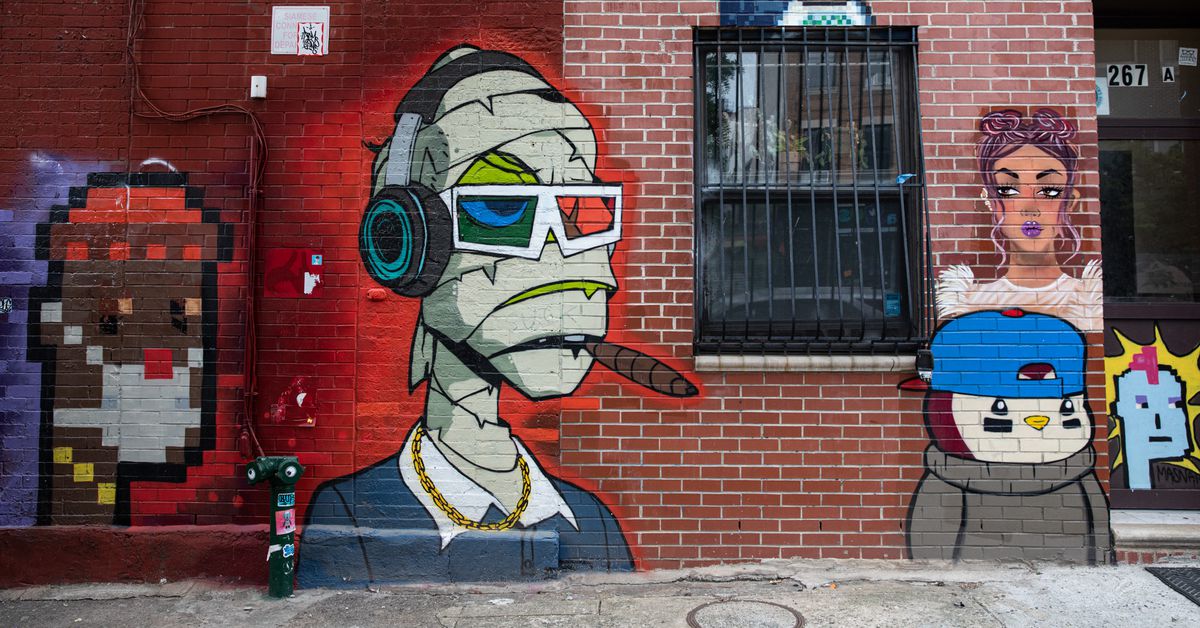 Last year, NFTs started showing up on a three-story brick apartment building in Williamsburg, Brooklyn. Located at the intersection of Grand Street and Roebling Street, the murals are the work of a graffiti artist named Masnah. Each is an order of the token holder, faithfully reproduced. There are almost 60 in total, with more coming in, sort of physical proof of the NFT tree.

Starting with the graffiti world, Masnah was amazed at how graffiti artists sold NFT versions of their work – and how few tried to take NFT images to the streets. “All the big names in graffiti were just making displays of their art as NFTs,” he recalls, “so I wanted to approach NFTs from the graffiti side.”

After discussing the idea in the CryptoPunks discord, he started taking commissions. “The power of graffiti is that you see it in every corner, right? It’s alive. It’s part of the public space,” he says. “I thought the physical space would be a good place to make these.”

Masnah’s first assignment was a few blocks away, painting a CryptoPunk cowboy on North 14th Street between Nassau and Wythe Avenues. The mural itself got some attention, but it really kicked off when the owner started sharing it online, with the kind of high profile consumption that was inescapable during the NFT boom.

“He strained it,” Masnah recalls. “When he put that on Twitter, it kind of exploded because no one had done it before.”

That summer, NFT owners had cash and many were willing to pay to see their profile pictures in physical form. Soon, Masnah was getting dozens of commission requests, so many that he started putting them all in one place: the Roebling apartment building. The building owner was sympathetic to the project and even applied an anti-graffiti coating over the murals in case someone tried to tag them.

Meanwhile, the commissions kept pouring in. For NFT owners, a spot on the wall was part flex and part investing. “The owners of these properties saw the value in painting by me on the street,” Masnah says. “If I took the photo, it would get all the attention on Twitter that day.”

Finally, Masnah put his commission system on the blockchain as well. After getting stiff a few times, he started his own NFT collection called “Another Flex on the Wall”. To have a mural made, token holders purchase one of Masnah’s tokenized bricks, priced at 1 ETH, 1.5 ETH and 2.5 ETH depending on the size of the mural. The mural itself also goes on the blockchain, linked back to the original token.

“It is the first collection of graffiti on-chain. Before NFTs, you couldn’t own graffiti. You had these pictures of [famous graffiti photographers] Martha Cooper and Henry Chalfant, who documented the graffiti and took these famous photos of the trains. Their pictures are worth a lot of money, but the guy who painted the train, his work isn’t even really on the market. He will never get credit for that. So now with this technology, we as street performers can own that wall.”

While NFTs typically represent digital images, Masnah’s project fits into a more recent trend of tokens associated with physical objects. In most cases, the object itself is held in custody by the mint master or bought and sold independently of the token. The system has been used to sell tungsten cubes, sell a physical painting by Damien Hirst, and operate a marketplace of luxury collectibles.

In the meantime, the mural rental company is expanding. Masnah has heard about an artist named Manny Links doing a similar business in LA, though the rates are lower and he hasn’t found a single building – at least not yet.