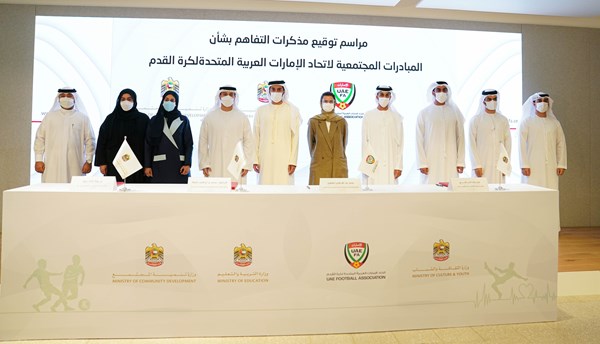 And under the joint cooperation with government agencies and commissions, the Football Association has entered into cooperation agreements with the Ministry of Education, the Ministry of Culture and Youth and the Ministry of Community Development, as part of the efforts of the Federation and the Community Affairs Committee, to strengthen cooperation with ministries and official bodies, to serve the affiliations of the football game and support them in all available ways.
This happened during the celebration, which was held in the presence of Sheikh Rashid bin Humaid Al Nuaimi, President of the Football Association, Noura bint Mohammed Al Kaabi, Minister of Culture and Youth, and Hessa bint Issa Buhamid, Minister of Community Development.

The signing ceremony was attended by Ibrahim Al Hammadi, Member of the Board of Directors of the Football Association, Chairman of the Community Affairs Committee, Saif Al Mansouri, Member of the Board of Directors of the Football Association, Muhammad Abdullah Hazam Al Dhaheri, Secretary General of the Federation, Dr. Muhammad Al Mualla, Undersecretary of the Ministry of Education for Academic Affairs, and Mubarak Al Nakhi, Undersecretary of the Ministry of Culture and Youth Moza Ibrahim Al Akraf, Undersecretary of the Ministry of Community Development.
Sheikh Rashid bin Humaid Al Nuaimi welcomed the ministers and honorable attendees at the signing ceremony and emphasized that the signing of the three agreements heralds a prosperous and advanced future for Emirati football. , and we hope it will lead to concerted efforts for an educational sports community.
The president of the football association appreciated the close interaction of ministries, official and government bodies with the federation’s programmes.
He added: We are delighted with the great response from all national institutions, in the context of their pioneering and important role for the youth of the country, pointing out that the new agreements are an important and new step in the joint cooperation and promoting knowledge sharing as a priority within the “Union Strategy”.

The agreement between the federation and the three ministries is in line with the principles of the strategic plan 2038 launched by the football association and aims to involve the different authorities and institutions in roles aimed at increasing the football practitioners and developing the technical, educational, social and cultural levels.
The terms of those agreements include laying new foundations for the transition to broader horizons of cooperation, promoting the integration of young people, students and members of society in the game of football, as the agreement will be concluded with each of the three ministries. are related to the development of a joint framework, through which both parties can work together. The athlete, according to the competences of each party, with the aim of achieving a healthy quality of life, under the heading “Sports for All”.
The agreement with the Ministry of Education is aimed at a number of male and female students, with the participation of technical teams from both sides, and covered several axes, including: exchanging information and knowledge, qualifying technical, professional and administrative cadres, and organizing seminars and conferences.
The agreement signed with the Ministry of Culture and Youth provides for joint cooperation in sports media content services, through the Media Regulation Office, in addition to the work services of sports media professionals specializing in football, and to limit them to a common database.
On the other hand, the Football Association’s joint cooperation agreement with the Ministry of Community Development was intended to exchange information and knowledge, jointly cooperate in seminars and conferences related to community initiatives, and participate in the preparation of presentations, publications, marketing materials and materials to support community development programs.
This new orientation and new vision embody a move aimed at a better future of the game, organizational, managerial and technical, in the short and long term, and also contribute to playing a deeper societal role, by using make the great successes of the three ministries involved in the agreement, with their great weight and presence, where they are involved in the Ministry of Education, by investing in people, drawing its present and building its future , in addition to the Ministry of Culture and Youth, which is engaged in enriching the culture and youth sectors in Emirati society, of which football is a part, while the Ministry of Community Development makes every effort, to society to keep pace with the great development that has become. our beloved country, and this common vision between the federations and those official bodies is integrated, to achieve the benefit of the player, the student and the individual in society, in a way that improves the social and educational character of all Emirates football affiliates, which is beneficial for the future of our players.
Her Excellency Noura bint Mohammed Al Kaabi, Minister of Culture and Youth, expressed her joy to be one of the guests of the cooperation agreements between the Football Association, ministries and government institutions, in the context of supporting creative initiatives to improve the Emirati community as a whole, and the youth and sports sector in particular.
She said: Thanks to the support of the wise leadership, the UAE has been proactive in empowering young people, preparing them to take responsibility and involving them in decision-making, and the sports sector is an important part of youth education, it requires concerted efforts across sectors and institutions, emphasizing the importance of such initiatives to support and define policies and strategic plans. passage to the future.
Her Excellency Hessa bint Issa Buhumaid, Minister of Community Development, appreciated the Ministry’s cooperation with the Football Association and other institutions and said: We are pleased to continue the cooperation with the Football Association, which aims to spread awareness of the community and the bonds of affection and friendship between all members of society.
She added: We look forward to working together in seminars and conferences related to community initiatives, and support any initiative launched by the two sides from a societal point of view, emphasizing the importance of continuing the work on the implementation of the initiatives launched and the following with those involved in this field and that success is only achieved through coordination and reciprocity with different parties.