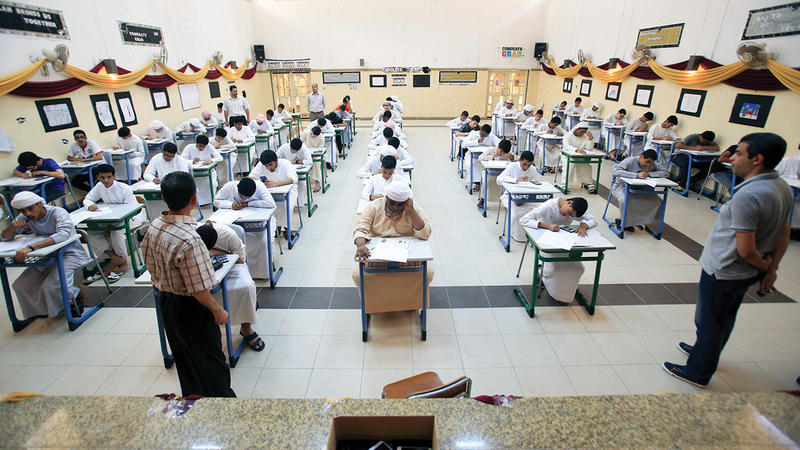 Citizens agreed that the current form of the Emirates Standard Test (EMSAT) should not be regarded as a prerequisite for accepting students with high school diplomas at universities in the country, as well as their enrollment in educational missions outside the country, as these test is a “complicated and difficult evaluation tool.”

In turn, a member of the Federal National Council, Maryam Majid bin Thaniah, called on the Ministry of Education to review the requirement to pass the “EMSAT” test, as it prevented outstanding students from receiving scholarships, despite the high marks, while the Ministry pledged to conduct a comprehensive study into lowering minimum test scores according to For majors, a decision will be made early next year.

She brought up in detail an intervention directed by a member of the Federal National Council, Maryam Majid bin Thaniah, to the Minister of Education, Dr. Ahmed Abdullah Belhoul Al Falasi, at the session of the Federal National Council held last week, on the requirement to pass the Emirates Standard Test (EMSAT) with the aim of accepting students who have a general secondary certificate in the country obtained, as well as students who obtained scholarships outside the country, wide response among hundreds of citizens who praised the importance of the supervisory authority, represented by the Federal National Council, focusing on social issues and files pertaining to each home, and discussing them with the executive authorities are represented in the government. They emphasized that the “EMSAT” test is a difficult assessment tool and many students miss out on the opportunity to continue their university education.

And finally, a video circulated on social media platforms of an intervention where a member of the Federal National Council, Maryam Majid bin Thaniah, posed a parliamentary question to the Minister of Education, which read: “The Ministry of Education passed several years ago for the Emirates Standard Test (EMSAT) for the purpose of admission Students who have completed a high school diploma in the country as well as students who have obtained a scholarship outside the country, but the application of this condition has resulted in many national students being denied entry to higher education opportunities in the country or scholarships outside the country, although the prestigious universities abroad do not require this test to accept. So why is the ministry not addressing the issue by considering removing this condition in light of what it has led to the reduction of higher education opportunities?

Bin Thaniah said, “We used to conduct exams to measure the skills required for universities and colleges, but today we are talking about (EMSAT), which complicates the process of student continuity in education, and how many students lost seats in universities because of one of the (EMSAT) marks, and it was because of materials. It is not essential in the disciplines they study at university, and the problem is that the score of this test is the one that prevented students from entering universities, and became an obstacle for students who dropped out of college due to subject matter or grade in ( EMSAT).

Bin Thaniah called on the ministry to review the requirement to pass the (EMSAT) test for student admission to universities, and also demanded that students who sit at home due to a grade in (EMSAT) be allowed to enroll in universities as well. such as those who were denied a scholarship despite getting high grades, especially since there are those who have been accepted. In prestigious universities without passing (EMSAT).

This was supported by a large number of citizens on their personal social media pages, where an account in the name of “Nasser Al-Sheikh” confirmed his confidence that the leadership would consider the issue of citizen students who graduated from high school and were denied university studies , emphasizing that the state leadership is more interested in young people. Homeland, and I know rehabilitation is better than deprivation.

An account in the name of “Khadija” stated that tests like “EMSAT” and “IELTS” are difficult evaluation tools, explaining that she knows many high school students who passed, but they are at home without work and they have not passed the exam finished. university studies because they failed the “EMSAT” test. Because their specialties do not require this test.

This was backed up by a report in the name of “Abdullah Al-Shamali”, which stated: “Such tests are evidence of the lack of development in the global education system, which still relies on studying for grades and not for educational attainment, and the result reaches the labor market, where you see some managers focusing on the moment of entry.” Going out is more than productive.”

While an account in the name of “Salah Al Balushi” added: “We didn’t study Emsat, TOEFL or IELTS, but we studied the basic system for a year, and everyone passed, and some colleagues became deans of prestigious universities, international doctors, professors of international universities, directors of international companies and senior leaders, and I think if it were applied during that period, the Emsat system would have lost the competencies for which Lebanon is attested.

For his part, the Minister of Education, Dr. Ahmed Abdullah Belhoul Al Falasi, confirmed that it is mandatory to master the English language to accept students in higher education institutions by taking the standard test “EMSAT” which includes several similar tests replaced. that the prerequisite for mastering the English language is to complete higher education as a country speaking the Arabic language, it is fixed and no change has been made.

Speaking at the session of the Federal National Council held last week, the minister said: “With regard to setting a minimum score for the (EMSAT) test for admission to universities, we are now conducting a comprehensive study and a decision will be taken. be taken early next year regarding those scores required for each major.”

He added: “Mastery of the English language will continue, but the issue of establishing a minimum score for each major is being studied and will be presented to the Board of Education,” noting that the “EMSAT” test has two aspects, the first aspect is the quality of educational outcomes, and the second is university admission. Because there are universities who believe that there is a lot of benefit from these tests, emphasizing that the Ministry has recently established a minimum score for “EMSAT” in some specializations, and it contains full marks and statistics on the number of students who passed the test and how they are distributed among the specializations.

A number of students who interacted with the responses to the “EMSAT Test” question concluded with three proposals to address the “EMSAT” test, including canceling this test, lowering the minimum pass rate, or merging it with a high school diploma, emphasizing that the difficulty of this test is a lack of training Continue with the examination method and the basics of handling it.

They emphasized that about 70% of students face the problem of passing this test for a period of two to three years, and expressed the hope that the Ministry of Education will put an end to this issue in order to encourage students to save those who dropped out of completing their education.

One of the students said, “I passed high school with a score of 79%, and I applied to UAE University and passed (EMSAT) with high score in English and Arabic, and physics, but the university did not accept me because my success rate didn’t reach 80.

Another student said, “I have dropped out of university studies because I have to pass tests like (TOEFL) and (EMSAT), although English language has nothing to do with my studies because my major is Arabic language. “

While a student at the Higher College of Technology described his experience with the “EMSAT” test as benefiting him as it helped him improve his level of reading, writing and speaking English, but at the same time it was detrimental to him as it hindered his access to the university for a full year, in addition to the exorbitant sums he made to pay «Emsat.