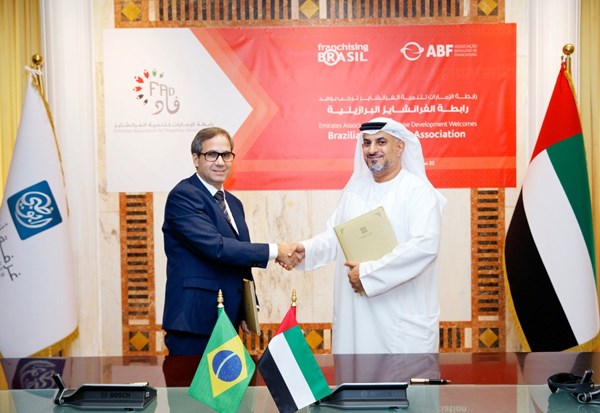 The Emirates Association for Franchise Development and the Brazilian Franchise Association have signed a Memorandum of Understanding, based on the two parties’ understanding of the importance of closer mutual cooperation in developing franchises and creating a business environment that supports it as a global system of positive partnership and the transfer of experiences and best practices between their members.

This happened during the reception of Mohammed Hilal Al Muhairi, President of the Emirates Franchise Association (FAD), Bruno Amado, International Director of the Brazilian Franchise Association, and his accompanying delegation, at the Association’s headquarters in the Abu Dhabi Chamber of Commerce and Industry, in a business meeting that included the presence of a number of association stakeholders and local brands. And Emirati investors who wanted to acquire a franchise. Six companies of international Brazilian brands looking to expand in the UAE and the region participated in the meeting.

For his part, Mohamed Helal Al Muhairi, President of the Emirates Franchise Association (FAD), welcomed the Brazilian Franchise Association’s interest in being part of the UAE market and its desire to expand the presence of Brazilian franchise brands in to expand the region. . He stressed that this is the result of the historic and solid friendship between the UAE and Brazil.

He pointed out that there are a number of commercial cooperation agreements that brought them together in different economic sectors, resulting in a remarkable growth in the volume of non-oil trade between the UAE and Brazil from 2020 to 2021, amounting to an increase of almost 40 percent. %. As well as the existence of a double taxation agreement, visa waiver agreement and others.

Al Muhairi stressed that the UAE’s economy is the second largest in the Arab world. The country experienced growth of 3.8% in 2021 and is expected to grow to 5.4% in 2022. With government initiatives for digital transformation and efforts to double the size of the manufacturing sector by 2031.

In addition, the UAE is constantly working to support various businesses and encourage foreign direct investment. Accordingly, the UAE government has provided financial and monetary aid worth Dirham 388 billion ($105.72 billion), as part of measures to reduce the epidemic. The Central Bank will also provide 50 billion dirhams to support businesses by increasing liquidity in the banking sector and facilitating loans.

He pointed out that the UAE is considered a global business center and has a strategic location between continents with a business-friendly environment and laws. That made it a gateway to global markets in the Gulf region and the Middle East, highlighting the UAE’s willingness to support global franchises for expansion in the region through the establishment and establishment of their businesses. He welcomes the Brazilian franchises in the UAE, which will be a great addition to the UAE market.

The Emirates Franchise Association (FAD) president has revealed that our local national franchises are growing and expanding into Gulf Cooperation Council countries. The UAE is one of the largest franchise destinations in the Middle East. With increasing franchise investment in all sectors including retail, food and beverage, children’s education and other sectors, businesses are taking advantage of franchising opportunities in the dynamic UAE economy. There are currently over 100 new franchise opportunities in the UAE, excluding established brands. This reflects the interest of international companies in the UAE market and their confidence in the country, which fosters a dynamic business environment that supports companies in achieving their goals.

It is worth noting, according to the expert report from 4 years ago, that the contribution of the franchise to the GDP of the UAE was $19 billion. While it is growing rapidly with the expansion of large shopping centers with many outlets selling brands from different countries. food and beverage franchises dominate the local market, with franchise growth exceeding 25%.

About the Emirates Association for Franchise Development, Mohammed Hilal Al Muhairi stated that (FAD) was founded in 2015 and aims to develop entrepreneurship in the UAE, strengthen ties with international franchise links and frameworks, provide support, services and support to entrepreneurs and encouraging them to enter the field, noting that the Association is working to expand and diversify its franchise base to encompass all economic sectors, creating the right environment to achieve effectiveness and efficiency in everything related to commercial franchising and rights protection, and spreading awareness of the role of franchises in the development of the national economy Latest ideas and projects.

For his part, Bruno Amado, the international director of the Brazilian Franchise Association, appreciated the Emirates Association for Franchise Development (FAD) role in improving the business experience of the importance of franchising, and expressed his desire to strengthen the collaboration to be effective, to serve common interests, emphasizing the importance of the Emirates Association for Franchise Development in the region.Amadou defined the Brazilian Franchise Association and has more than 1,500 franchisees, franchisees, consultants and service providers.