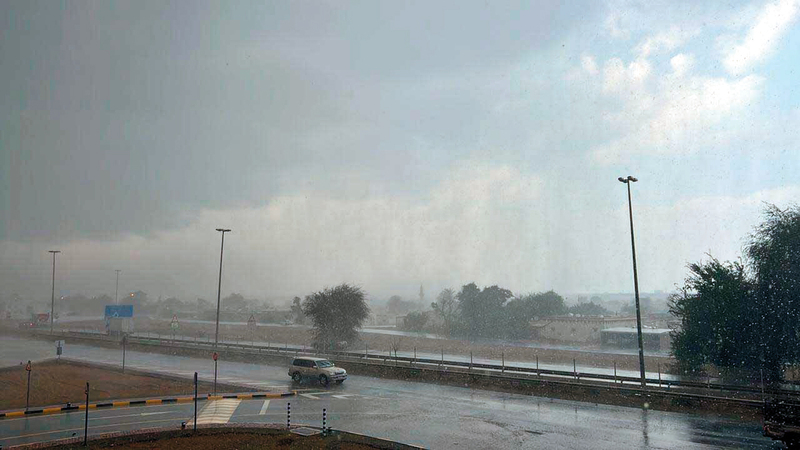 The National Center of Meteorology confirmed that the country was exposed to rain of varying intensity, sometimes with thunderstorms, and attributed the reason to the state being hit by a surface depression from the east, accompanied by a cold air mass and an expansion of an air depression. in the upper layers of the atmosphere, leading to a state of instability in the eastern and northern regions.

The center explained to “Emirates Today” that the rain started the day before yesterday in the east of the country in Fujairah and the east coast, and gradually spread yesterday to reach Dubai and the northern Emirates, where heavy rains of varying intensity were recorded in some places. He pointed out that the depression is moving from the east to the west so that the rest of the regions will be affected by it, expecting the rains of varying intensity to spread from the city of Al Ain towards Abu Dhabi up to the interior . , today, to start withdrawing and end from tomorrow.

The center added that this time of year will see partly cloudy to partly cloudy weather interspersed with cumulus clouds, especially in the east and north, extending over some coastal areas and western areas and islands, with a chance of light to medium rainfall, it can be heavy at times in some of these areas, and at regular intervals.

The center expects the weather tomorrow to be generally clear to partly cloudy with some low clouds appearing in some areas, which could be cumulus in the afternoon, while staying humid overnight into Friday morning, with a chance of light showers. fog forming in some internal areas, indicating winds will be south-easterly, shifting to northeast and northwest, light to moderate speed. The speed is sometimes active and the speed ranges from 15 to 25 km/h and reaches 35 km/h on the sea, which is light in the Arabian Gulf and in the Sea of ​​Oman.

In addition, the emirate of Umm Al Quwain witnessed severe thunderstorms yesterday, prompting schools in the Northern Emirates to secure the return of students to their homes by leaving in an orderly manner once the vehicle of each student’s family arrived in front of the door. from the school, and call his name to get directly into his family’s car, so as not to be exposed to rain or health hazards.

The local emergency, crisis and disaster team in Ras Al Khaimah announced the formation of a team to conduct field visits to inspect the sites and areas likely to be most affected during the rainy and torrential season, and to prepare a detailed report on the readiness of the Emirate’s infrastructure, and the necessary actions and measures to be taken to mitigate risks, to implement the strategy. The Ministry of the Interior, which aims to maintain the safety and protection of life and property and the dissemination and improvement of security and safety.

The Ras Al Khaimah police gave 11 tips for safe driving in the rain, especially slowing down when visibility of the road is limited, leaving a greater distance behind other cars, counting at least five seconds for a full stop, turning on the dipped headlights while driving during the day and turning on the air conditioning to prevent formation Steam in the vehicle, move to low speed lanes, avoid changing lanes unless necessary, do not use four-way signals except in the case of a full stop or sudden stop and on both sides of the road, in addition to periodically checking the condition of brakes and tires, checking the windshield wipers and avoiding the mountains and valleys where heavy formation is likely to occur.