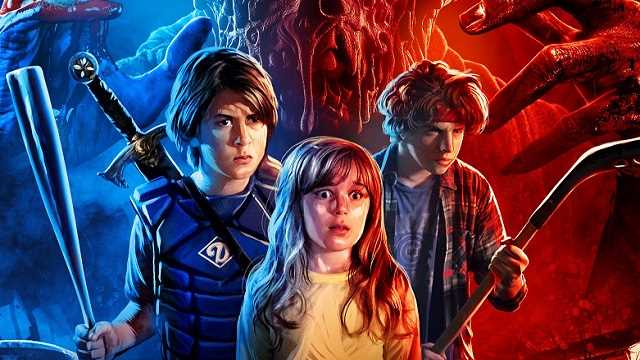 With the success of Weird stuff does imitation, such as the comic-like art on the poster appear on the poster the bloody manwhich is not only in the same genre, but also stars from Nightmare in Elm Street!

There are many times when an actor or actress sticks to a specific genre in their career. This could be due to their interest or their past performances that make them type cast.

That’s often the case with horror veterans, and while the following actresses aren’t necessarily “scream queens,” they certainly have a few horror movies on their resume. With years of experience under their belts, both Lisa Wilcox and Tuesday Knight may have performed in the Nightmare in Elm Street movies, but between then and now they’ve largely avoided the genre in the meantime.

Returning to the genre together in the same movie, both actresses were called out for the same role and ended up playing the stepmother and the mother of the children in the bloody man, a film that takes inspiration from Weird stuff for its horror aesthetic and storytelling.

Even the poster for the bloody man is clearly inspired by titles like Weird stuff, which is perfect timing given that the remaining episodes of that show’s fourth season drop today.

Below you can hear, see and read our chats with Lisa Wilcox and Tuesday Knight, including part of the transcript.

(Above – Audio interview with Lisa Wilcox)

Literary Joe: Since you two have returned to the same movie again, I was wondering if you two worked together on set at all?

Lisa Wilcox: No, we don’t have scenes together. And in fact she flew away the day I flew in, so we didn’t see each other, but at least we’re in the same movie together, right?

Frankly, my genre was theatre. That’s where I started, was theatre. And after the theater I did sitcoms, I did episodic, I did a lot of soap operas, and none of it was horror related. Even after I did A Nightmare on Elm Street, it was some sci-fi stuff and more episodic. After that, I stopped acting for a very long time, so I was happy to do this.

(Above, video interview with Lisa Wilcox; description below)

Today I had an excellent time chatting with actress Lisa Wilcox. Famous for a number of movies, many people recognize Wilcox from A Nightmare on Elm Street 4 and 5, and while she doesn’t do too much horror when it comes to her acting, we met to talk about a new movie in which she’s playing – and it’s a horror/thriller. The Bloody Man is her new movie, which we also talked about in previous episodes with Tuesday Knight and KateLynn E. Newberry. rel=”nofollow” target=”_blank”>

The movie is very Stranger Things-esque and brings a lot of fun to the scary movie. We also talk about her upcoming movie Mystery Spot, another horror movie despite eschewing the genre, she discusses the importance of a specific charitable foundation, and we discuss her 15-year absence from the screen to raise her children. There’s something in this chat for everyone, so sit back, grab the popcorn and have a great time!rel=”nofollow” target=”_blank”>

Lisa Wilcox, continued: I love that you said “my resume is speckled” with disgust. And I’d like to say even more since I started acting again, all the kids who loved horror in the 80’s and grew up with it have gone on to be writers and producers or directors or whatever. They liked A Nightmare on Elm Street or Friday the 13th, or whatever, so they’ll contact me and say, ‘I have an unfunded script and would you be interested in playing Peggy, or whatever ‘. So I’d say in the last four years since I went back to acting, I’ve done more horror than I’ve done in my entire life. Which I love by the way.

I’ve loved horror since I was a little girl. It’s one of those things where Saturday mornings were cartoons, then the Monkees, and the rest of the afternoon it was all Twilight Zone, black and white movies, vampires, Frankenstein — and I loved it. So I’ve been into horror since I was about ten years old.

In A Nightmare on Elm Street, which you see on film, he and I do it. We actually had quite a few scenes in both movies. Then we also did something together called Fear Clinic, and even though I wasn’t on the show, we did make webisodes. So it was nice to work with him outside of makeup. He’s my Uncle Robert.

(Above: audio interview with Tuesday Knight)

Literary Joe: I know you have returned in horror the bloody man next to your opponent from the Nightmare in Elm Street movies, can you tell a little more about that experience?

Tuesday Knight: No, actually they gave me the script and I wanted to play that part of the stepmother. And they were also interested in Lisa, and she got to play the part of the real mother. But we still haven’t gotten around to working together. I flew in and she came in at different times so we couldn’t film together but it was nice to know she was in it; that we were both in it.

I’ve only made three horror movies, so when people call me a scream queen, I always think it’s really funny because I’ve really only done one slasher/scream thing, and that was A Nightmare on Elm Street.

(Above: video interview with Tuesday Knight)

In this episode I am joined by Tuesday Knight. She is known for her many roles, but we mainly focus on a few of her horror pieces here. She was in 4 Nightmare on Elm Street and coincidentally, the movie she just released, The Bloody Man, also stars Lisa Wilcox, her co-star from the same Freddy Krueger movie.

We talked about her career path, the people she’s worked with, and why she loves taking on character roles so much. It’s a fun conversation and I hope you enjoy it before The Bloody Man chases you away!

the bloody man will be available digitally on July 12, with physical format to follow at a later, unspecified date.