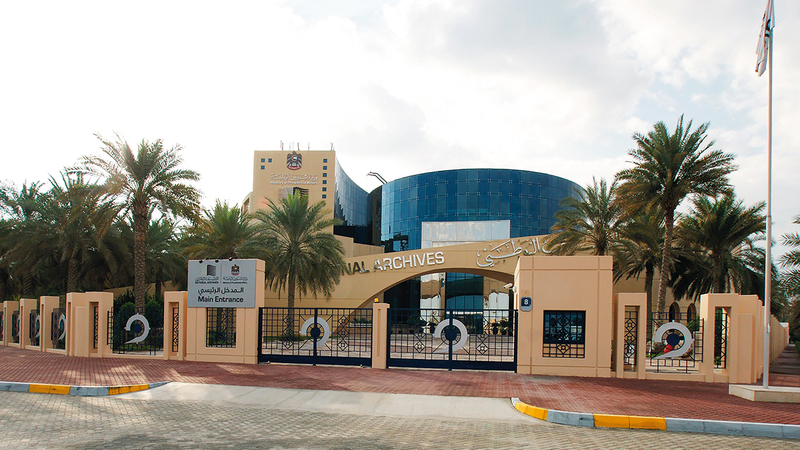 In conjunction with International Archives Day, which falls on 9 June; The National Archives and Library celebrated his career for nearly 54 years, during which he was able to play a prominent role in preserving the ‘memory of the nation’. institutions in the UAE and the largest documentation center in the Gulf region. The oldest and richest archive on the Arabian Gulf.

The journey of the National Archives and Library began in 1968 when it was established under the name “The Office of Documents and Studies” under the guidelines of its founder, the late Sheikh Zayed bin Sultan Al Nahyan, may his soul rest in Arabic and document and translate its culture in general, and the United Arab Emirates in particular, from its original sources in Arab and other countries. In 1972 the name of the agency was changed to the Center for Documentation and Studies, then the Center for Documentation and Research and the National Center for Documentation and Research. The Federal Law No. 7 of 2008 was issued according to which the archives were organized in more than 300 government agencies, and the real realization of the importance of archives for preserving the memory of the nation began, which contributed to a real breakthrough in this aspect.

The National Archives and Library has a vast collection of documents in its various containers, whether they are paper, such as maps, manuscripts and plans, or audiovisual, such as tape sound recordings, photographs and films, and electronic documents stored on a computer, floppy disks, or optical discs.

The National Archives and Library offers its publications that combine authenticity and modernity for researchers and intellectuals, in addition to its role in documentation and archiving, documenting and collecting valuable historical material related to the Arab Gulf States in general and the UAE in particular translating them, preparing specialized historical research and publishing, and conducting local, regional and international seminars and conferences. Participating in and organizing exhibitions related to the Emirates inside and outside the country.

The National Archives and the Library wanted to keep abreast of technical developments during their training and also launched some important initiatives; The most prominent of these is the Digital Archives of the Arabian Gulf, established by the National Archives and Library in conjunction with the British Archives. This site presents to its visitors on the internet hundreds of thousands of historical documents related to the UAE and the Gulf region.

The National Archives and Library also established the Conservation and Restoration Center, following a visit to the archives of government agencies, which were full of documents susceptible to damage that need to be preserved and restored in scientific and professional ways in order to can live a longer life The Conservation and Restoration Center has made a strong start in the laboratory for the restoration of archival material, the digitization laboratory (photography) and warehouses for the preservation of archival material, making it qualified to preserve thousands of kilometers of historical documents.

The National Archives and Library paid great attention to the qualification and development of national frameworks in document management and archival sciences and, in collaboration with Sorbonne University – Abu Dhabi, launched the Professional Certificate in Document Management and Archival Sciences, followed by a Bachelor’s Degree in Document Management and archival science, and final preparations are being made to initiate a specialized master’s degree in records management.

A beacon of civilization, under the guidance of His Highness Sheikh Mansour bin Zayed Al Nahyan, Deputy Prime Minister and Minister of Presidential Affairs, the strategic plan for the establishment of the National Library was launched after the issuance of Federal Law No. 13 of 2021 , regarding the amendment of some provisions of Federal Law No. 7 of 2008 relating to the National Archives, to be a civilized and cultural beacon for the United Arab Emirates.

The strategic plan, prepared by the Archives Department and the National Library, aims to consolidate the library’s position as a national reference point and cultural and information center preserving the heritage of the UAE, and emphasizes its scientific and civilizational development, similar with the major global libraries incubating human heritage.

In addition to his role in documenting and collecting valuable historical material, he provides publications that combine authenticity and contemporary, for researchers and intellectuals.

It is one of the oldest cultural institutions in the UAE, the largest documentation center in the Gulf region and the oldest and richest archive in the Arabian Gulf.