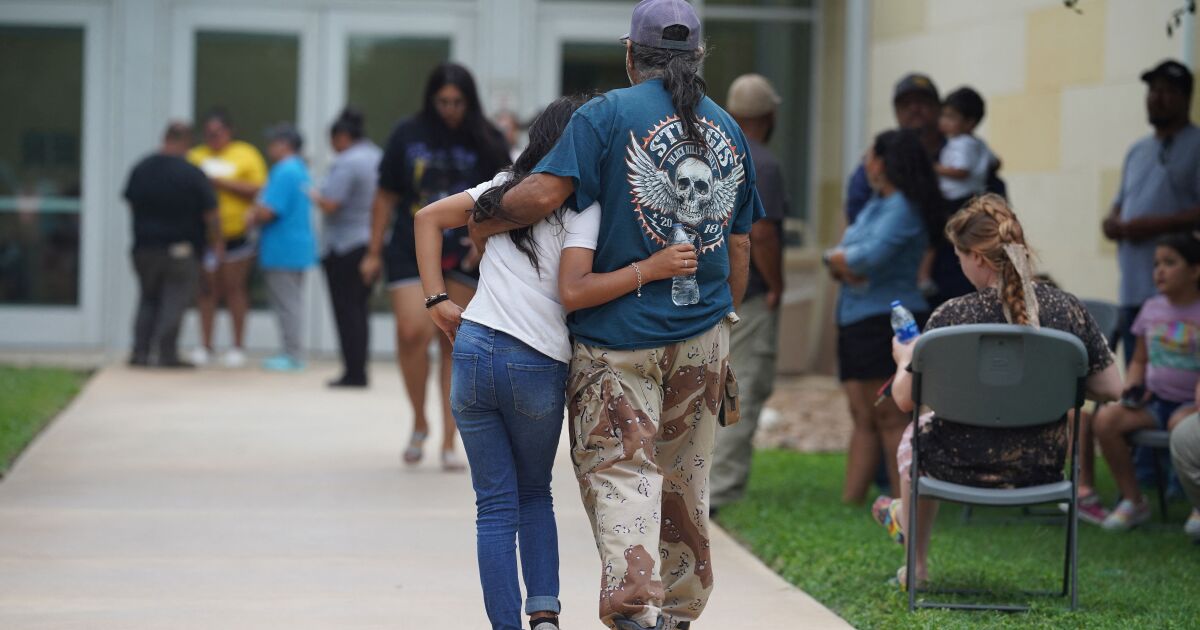 “What are we doing?”

That’s what Senator Christopher S. Murphy (D-Conn.) asked after 21 people, including 19 children, were killed Tuesday in a mass shooting at a Texas elementary school, just over a week after authorities charged the racially motivated murder of 10 people in Texas. a grocery store in Buffalo, NY.

“There have been more mass shootings than days in the year. … Our children live in fear,” he said.

Murphy, a longtime proponent of gun control legislation, specifically addressed his colleagues in the Senate chambers. “Why go to all that trouble to get this job, put yourself in a position of authority as your answer, when the carnage mounts as our children run for their lives, we do nothing?”

The five-minute clip went viral in part because he could have talked to any American when he said, “This wasn’t inevitable. This only happens in this country. Nowhere else… and it’s a choice. It’s our choice. To keep it going. What. To be. We do?”

He certainly spoke on behalf of most Americans, the vast majority of whom support some form of gun control, including a ban on semiautomatic weapons. Early reports indicate that at least one such weapon may have been used to shoot students and two teachers at Robb Elementary School in Uvalde, Texas.

When he said, “I’m here on this floor to beg, to literally be on my hands and knees” for Congress to do something, to “stop sending this silent message of approval to these murderers whose brains, who see the highest levels of government do nothing, shoot after shoot’, I know he was speaking on my behalf.

I would absolutely be on my hands and knees in the Senate Chamber or wherever, in sackcloth and ashes and on broken glass, if I thought it would help. I am tired of living in fear of my children, my friends, my life, my country, because some people think that protecting the right to own weapons designed for massacre is more important than protecting the lives of Americans.

More important than ensuring the safety of our schools, our stores, our churches, our places of gathering.

I’m not against guns. I grew up in a gun community; my brother and i knew when hunting season started because we heard. We kept the dogs inside and avoided certain areas of the nearby woods. We grew up with cap guns and then BB guns, and my father taught us to shoot with his pistol and rifle. He wanted us to understand how they worked and to always remember that, like a car, they were deadly weapons.

But no one I knew had semi-automatic weapons in the woodshed; no one complained because they couldn’t take their guns to a restaurant, no one posed with military style guns for their Christmas photos.

My children grew up in a house without guns, not because I hate guns, but because they went to schools that had regular target practice. My husband grew up ducking under his desk for fear of the Russians; my kids learned escape routes and how to quickly lock the doors of the classroom because of armed Americans.

We’ve been lucky, if you’re considering raising three kids who have never experienced gun violence in their school until now, “thankfully,” which I suppose you should. Think about that for a moment.

A few years ago, before the pandemic, I heard what sounded like gunfire from my daughter’s elementary school. I was in the car before I could even think clearly. A block away, I passed a construction crew putting a new roof on a house with what looked like a nail gun. When I found the source of the noise, I almost vomited with relief. But I still drove to the happily peaceful school and sat there, imagining what life would be like if it weren’t for the roofers I heard.

So honestly, what are we doing? As a columnist and critic, I’ve written about mass shootings so many times that I really don’t know what to say anymore. I remember in the early days of the pandemic, when my youngest was struggling with online learning, she wiped her tears and looked at me with a grin and said, “Well, at least I don’t have to worry about school shootings.”

How did this become our reality?

Like many, I thought the horror of Sandy Hook would rip gun control out of the morass of gun lobbies-controlled politics and into the realm of public safety. Surely we can all agree that this massacre of innocents must never happen again, that we must do everything in our power to ensure that it never happens again.

But we disagreed and it has happened again, many times and often with higher body counts. Mass shootings are no longer anomalous tragedies; they are part of everyday life and create the kind of collective fear, insecurity, anger and fear that is the target of every terrorist.

Imagine a hostile nation committing these crimes – the outrage, the resolution, the money and the personnel that would be dedicated to ending them.

But we are the hostile nation here, terrorizing ourselves while too many of our leaders claim they can do nothing.

Our culture has become a culture of thoughts and prayers, broken hearted emojis and short waves of outrage that are met by preemptive demands from those who believe that the answer to gun violence is more guns, that we shouldn’t “politicize” the tragedy by talking about it. talking guns.

Except it’s about guns. Not all weapons, just the kind designed to shoot a lot of people with minimal effort.

Most bought them legally.

When that kind of slaughter is done with weapons that have been legally purchased, the laws clearly need to change.

But the laws don’t change, at least not toward controlling the number and type of weapons available to would-be mass murderers. So what are we doing?

As it stands, we are making it abundantly clear to ourselves and the rest of the world that mass shootings are perfectly acceptable in America. That we are not interested in protecting even the most vulnerable members of our society, that the regular butchering of children in their classrooms and adults in the marketplace is the price of living in this country.

That we love our guns more than literally anything.

Except not us. Or at least most of us don’t. In poll after poll, most Americans, including most gun owners, support some form of gun control, including universal background checks and red flag laws. As voters, we are responsible for electing officials who will see these laws passed, who will see this crisis of gun violence for what it is and do everything in their power to end it.

So what are we doing? Unless we are truly willing to collectively and publicly endorse a culture of self-imposed terrorism, to co-sign the future deaths of countless children and adults, the answer can no longer be nothing.