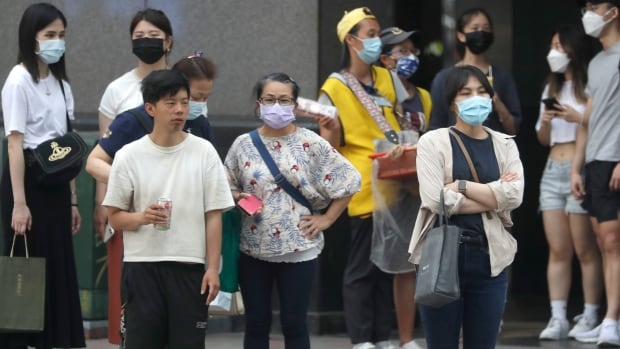 Taiwan, which was largely free of COVID-19, now faces its worst outbreak since the start of the pandemic, with more than 11,000 new cases reported on Thursday.

Things have been on the rise since late March. In April, the island’s central authorities announced that they would no longer maintain a “zero-COVID” policy like the Chinese government’s, in which they would place positive cases centrally in quarantine.

Instead, the government is asking people to quarantine at home if they test positive, unless they show moderate to severe symptoms.

Chen Shih-chung, the island’s health minister, announced Thursday that they had found 11,353 new cases, along with two deaths. Speaking at the Central Epidemic Command Center’s daily news conference, he said 99.7 percent of cases from the current outbreak had no or mild symptoms.

Most of Taiwan’s 858 COVID-19 deaths occurred in the summer of 2021. Until this month, it was the only major outbreak of the pandemic on the island.

Taiwan has been relatively lucky during the pandemic, but has also maintained strict border controls with a two-week quarantine on arrival for all visitors.

In our own country, wearing masks is universal, both outside and inside. Face masks are required by law in public transport and in shops and theatres.

In recent weeks, as the number of cases rose, people rushed to buy rapid tests, with stores selling out in a matter of hours.

The difficulty in buying rapid tests is likely due in part to the government’s idea during the pandemic that mass testing has few benefits. The health minister said last year that public funds and medical resources could be better used elsewhere.

That changed with last year’s outbreak.

The central government said this month it was working with Taiwanese companies producing tests to ensure access for everyone. A system was rolled out Thursday that limits each person to buying one pack of five tests per shopping trip. Every purchase must be linked to a person’s national ID to ensure no inventories are built up.

Experts are concerned about the five million people who have not been fully vaccinated against COVID-19.

Those who have not completed a full vaccination course are four times more likely to experience moderate or severe symptoms compared to those who have received a booster, said Ho Mei-Shang, a vaccine expert in Taiwan who has also worked for the US Centers for Disease. Control and Prevention, according to the Central Press Agency.

The most vulnerable to Taiwan’s outbreak this time around are children and the elderly. The vaccination rate among the over-75s is 72.5 percent. However, only 59.1 percent in the same age group received a booster.

Wang Zi-yu, 78, said she overcame her hesitation and received three doses of the COVID-19 vaccine.

“I thought not getting the vaccine was worse. In the beginning with the AstraZeneca vaccine, I was concerned,” she said, citing concerns that the vaccine could cause a rare blood clot. “And later I got the Moderna shot and didn’t have any negative reactions. It was fine.”

Shots for people under 12

Even the youngest members of society are not protected. Some schools have switched back to distance learning based on the number of positive cases reported by each school. The island will open vaccine shots to children ages six to 11 next week.

A two-year-old boy in New Taipei City died last week, the youngest victim of COVID-19 in Taiwan. His condition deteriorated rapidly after a positive test.

Still, officials urged the public not to panic, saying Taiwan was better prepared with vaccines and ways to ensure moderate and severe cases would receive prompt attention.

“We want to say to the public, from the medical field, rest assured,” said Chiu Tai-yuan, a lawmaker who also heads the Taiwan Medical Association. “Last year’s outbreak situation is not like the one we face today.”