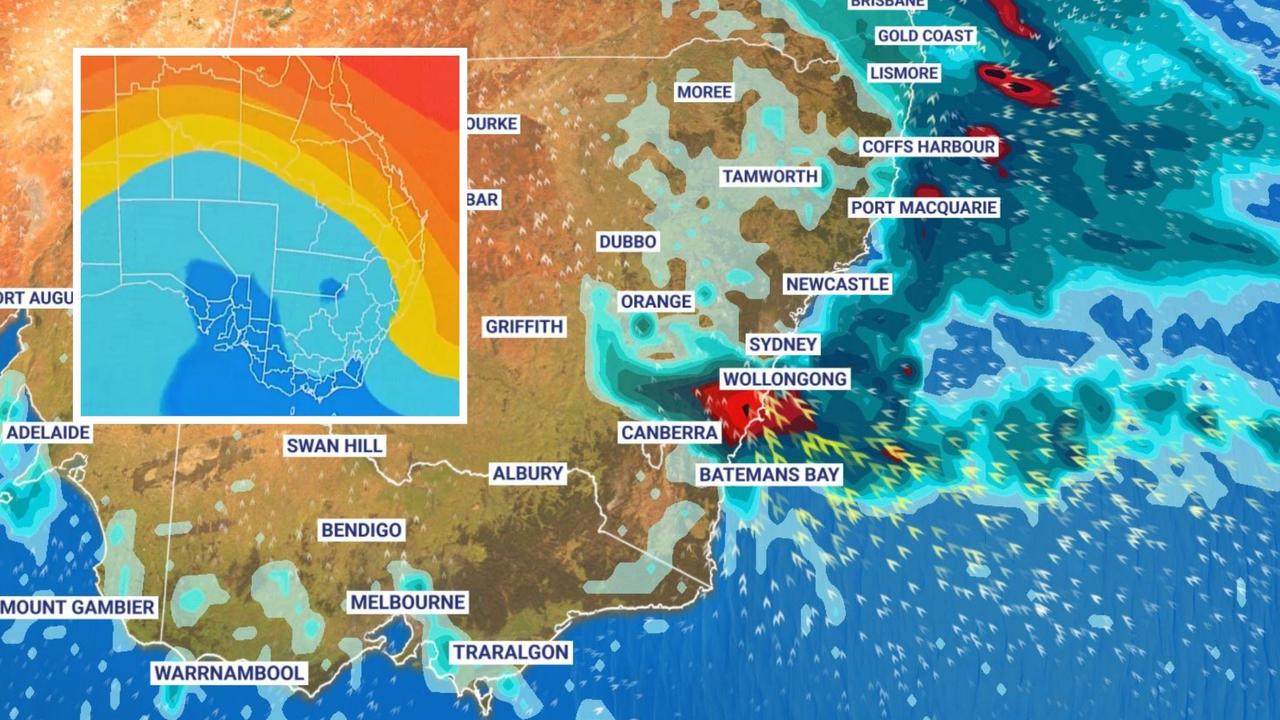 People in Sydney’s suburbs have been told to leave their homes after a month of rain that fell in just hours.

Residents in a number of suburbs in and around Sydney have been told to evacuate their homes as monster rains lead to mounting flooding.

In Camden, in Sydney’s west, 105mm of rain has fallen since 9am on Saturday; in Lucas Heights, in the south of the city, 175 mm has come down.

Overnight, the state emergency has issued evacuation orders and warnings for parts of Liverpool and Camden local government areas with evacuation centers in Narellan and Canley Vale.

At around midnight, the evacuation order was issued for low-lying areas of Woronora in the Sutherland Shire with a warning that once the water at Woronora Bridge reaches 1.7 meters, the suburb will be shut down.

Forecasters had warned that the immense amount of rain that fell on Sydney and the Illawarra, as a result of a forming East Coast Low, would lead to “essentially guaranteed” flooding, particularly in the Hawkesbury-Nepean River basin in the west of the United States. city.

At 12:30 a.m. Sunday morning, the Bureau of Meteorology had issued a moderate to major flood warning for the Nepean, Hawkesbury and Colo rivers. There was a risk of major flooding in North Richmond on Sunday evening.

Senator Murray Watt, the federal emergency management minister, said his administration had approved a request from the NSW government for two Defense Force helicopters and 100 troops to assist in operations should they be needed.

“Thanks to the NSW Government for their early request – cooperation and proactive action ensure we are prepared,” said Mr Watt.

He added that “major flooding” was possible on Sunday.

In a warning issued around 6 p.m. Saturday night, the Bureau of Meteorology echoed that sentiment, highlighting the risk of flooding at Menangle and North Richmond.

Meanwhile, the SES said it would send emergency alert text messages to communities along the Hawkesbury-Nepean watersheds “in preparation for possible evacuations overnight and in the coming days as rain intensifies in Sydney and the Illawarra”.

Some NSW regions have already seen a month of rainfall in less than one day.

The Illawarra has had heavy rain Friday and Saturday morning.

According to Sky News Weather, it is Albion Park’s heaviest July rain since 1904.

“Kiama has already seen more than 160mm of rain and local creeks and rivers have begun to rise, along with the threat of flash flooding,” said Sky News Weather senior meteorologist Tom Saunders.

On Sunday and Monday, the heaviest rain is likely to fall in the Illawarra, Sydney and above in the Hunter Region.

Mr Saunders said there were “many centres” in the low and one of them could be near the NSW Central Coast Sunday evening and Monday morning.

“If that were to happen, we’re not just looking at the heavy rain, but also at damaging winds… we could see gusts of up to 100km/h and with the very wet ground that could uproot trees, so we’re looking at a bit of damage from the system,” he explained.

It’s not just New South Wales that is in danger – Queensland is also clearly looking soggy in the coming days.

A higher level trough is causing the weather drama, pushing cool air up from South Australia.

That trough will interact with tropical moisture further north to produce these windy and wet intense weather systems.

“A trough is developing just off the coast of NSW,” Saunders said Friday.

“We expect that trough to deepen into a full-fledged East Coast Low this weekend.

“These systems are notoriously difficult to predict exactly when and where they will strike, but at this stage it appears that it is that central part of the NSW coast with rain that is also affecting the northern parts of the country,” he said. .

East Coast Lows have many of the characteristics of cyclones but are not classified as such as they are in subtropical waters. But they can still cause massive amounts of rain, storms and coastal erosion.

“Sudden and river flooding are essentially guaranteed,” said Mr Saunders of the fallout from this weekend’s weather.

“Damaging winds and power outages are possible, especially towards the end of the weekend through early next week.”

So how much rain can fall? Well, it depends on the meteorological model, but 200-300mm is a possibility with a chance of up to 400mm in remote areas and around Sydney, Wollongong and across the Blue Mountains. And that’s really not great.

If that happens, parts of Sydney’s western and northern fringes could be flooded.

The Bureau of Meteorology has issued a severe weather warning for heavy rainfall from Saturday around Ulladulla to Sydney.

NSW SES Commissioner Carlene York said that because dams and rivers were already full, there was “significant” concern about what’s to come for communities across the state.

“This significant downpour could have major impacts on communities from Port Stephens to Batemans Bay, so we are preparing and putting out community notices letting them know they are in some of these high-risk areas and ready.”

Only on Sunday it can be even heavier in Wollongong and the Blue Mountains with 150-200 mm possible.

Newcastle are looking at 35-50mm on Sunday and 50-80mm on Monday. Further north, there could be some showers over the weekend for places like Port Macquarie and Grafton, but totals will be much lower. Rain may also fall inland and south of NSW, but again this will be much less heavy than the Sydney basin.

Canberra is forecast to receive 10-25mm of rain between Saturday and Monday.

Queensland to get soaked

Widespread rain continues in Queensland. On Saturday it will decrease but on Sunday it should be bubbling up again with the heaviest falls early in the week.

Over the northern parts of the coast, rain totals of 100mm are on the map.

Townsville will see some showers as the weekend progresses, but Monday will bring it down, with 40-60mm forecast, and more for Tuesday.

In Brisbane, Saturday looks to be the wettest day, with up to 25mm of rain and less on Sunday. But there could be showers again on Tuesday. The other capitals will experience a very different weekend, with Melbourne, Adelaide and Hobart all remaining dry and partly cloudy with nearly uniform mid-teen highs.

Darwin will see some blue skies with maximums of 29C. But it is Perth that will be gloriously sunny. But it will be relatively mild with temperatures just approaching 20C.

– with Ben Graham and Chantelle Francis