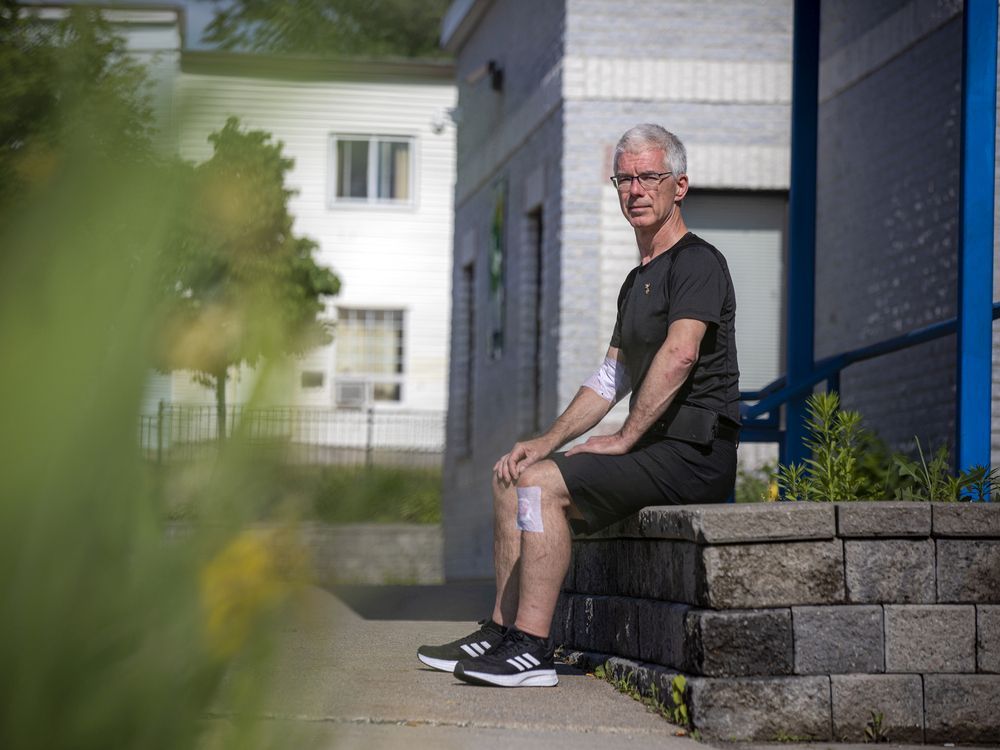 Bruce McConville is in pain and scrapes “with a few extra holes in me, but otherwise I’m fine” after he was brutally attacked by a pit bull outside a Vanier seniors’ center on Saturday night.

McConville, 59, lives nearby and works at the Center Pauline-Charron, where he helped organize a Saturday night dance for seniors at the French-speaking community center.

Another man, Robert Pagé, went outside about 10:30 p.m., where he witnessed two people – apparently the dog’s caretakers – outside on the street in a heated verbal altercation. The dog lives in a house on Cyr Avenue, he said, directly across from the senior center.

“When Robert came by, the dog attacked him. It was released and he just noticed. He feared for his life and sustained some serious bite marks on both wrists and his legs,” McConville said Sunday afternoon. “I saw him get his stitches this morning.”

The man stumbled back to the senior center, stunned and bleeding, where McConville quickly bandaged his horrific wounds.

Police confirmed they had been called to an address on Cyr Avenue on Saturday night, but had no information about the call on Sunday.

McConville said he assumed the dog was under control when police arrived, with three officers on the porch.

He began escorting the seniors to their cars one by one when the dog attacked again.

“One of the ladies was outside and suddenly I heard the dog barking and saw him jump over the railing of the (Cyr Street) building. It jumped and came in a straight line to the lady in front, just galloping right at her,” McConville said.

“I high-tailed, chased the dog and was able to distract him — I gave him a good quick kick — and that turned the dog’s attention on me.”

The woman ran safely back to the senior center, but McConville said, “I was trapped with the dog between me and the building.

“He jumped out a few times, and I could kick it, but every time he passed, he took a small bite or a bite out of me. I ended up struggling on the ground and rolled away – trying to get its jaws on my throat – and that continued until the police could intervene.

McConville recalled seeing about five officers at the time, and one of them fired a taser, “which seemed to have no effect,” he said.

The dog just ran back inside, he said.

The dog is known in the neighborhood for being “very rough and intimidating,” McConville said. “But last night’s adventure came completely unexpected.

“It was surreal when you’re in a situation fighting for your life.”

Paramedics arrived after the second attack and treated McConville on the spot. McConville had nursed Pagé in the center after the first attack, then drove himself to Montfort hospital.

McConville accompanied him there after a quick ambulance ride, was admitted around midnight and spent the night in the hospital before being stitched up and released Sunday morning.

He’s still in pain, but more than that, he’s disappointed with the lack of assurances he’s received from authorities after the “terrifying” incident.

“When the second attack happened and they returned the dog to the house, it was explained to me that the owner of the dog was not on the property, he was not available and the dog was not registered,” McConville said. “I was told that it is up to the caretakers to follow any orders.

“So, due to some bureaucratic protocols, I was told that the authorities could not remove the dog,” he said.

“That dog is allowed to roam freely, and it’s pretty mean and intimidating. So to hear that enforcement agencies can’t guarantee people’s safety by restraining that dog is very disappointing.”