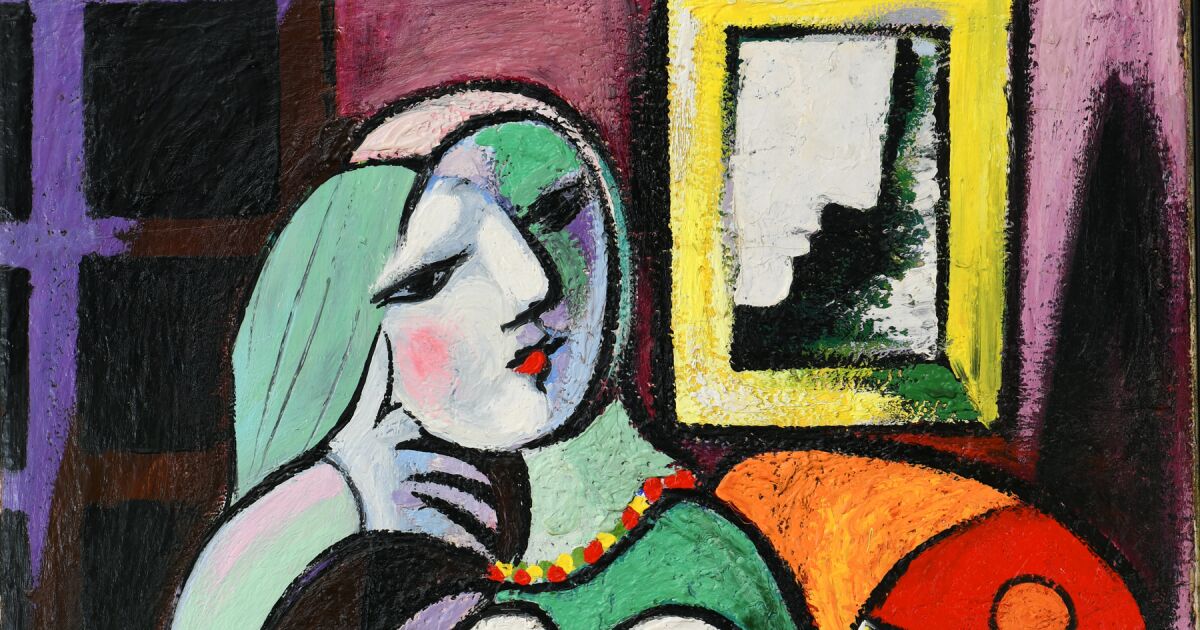 Two great new exhibitions, one small and the other large, both unprecedented, answer the question: Is Pablo Picasso (1881-1973) overexposed in American museums?

In a word, no. Hugh Eakins’ recent book, “Picasso’s War: How Modern Art Came to America,” reminds us that the reigning titan of the Parisian avant-garde before World War II was not exactly embraced in the United States. Since then, he has never been off the institutional radar screen. But if the curatorial framing is smart enough, there is much to be gained by looking again.

The exhibits at Pasadena’s Norton Simon Museum and the UCLA Hammer Museum in Westwood are both firsts, which is quite remarkable for an artist so extensively studied.

The small show is “Picasso Ingres: Face to Face” in the Simon – just two paintings, about the same size, both killer. The pairing was organized by Christopher Riopelle, curator of the National Gallery in London, where it was on display this summer, and Simon’s Chief Curator Emily Talbot.

For the first time, Picasso’s compelling ‘Woman with a Book’ from 1932, acquired by the late Norton Simon in 1960, hangs next to the extraordinary painting whose composition the Spaniard adapted for his own – in a way both affectionate and brash. Jean-Auguste-Dominique Ingres’ ‘Madame Moitessier’ from 1856 is one of two portraits the artist made of Marie-Clotilde-Inès Moitessier, a woman he named “the beautiful and good” – the beautiful and the good.

An incomparable National Gallery treasure never seen before in California, The Ingres is a sumptuous spectacle, a portrait of a wealthy merchant woman clad in silk highlighted by a lavish floral pattern, a hair trim of intricate white lace, and a cascade of pink. satin, plus chunky, dazzling jewelry. A painted fan is tucked under her left hand and she is surrounded by furniture that symbolizes her upper-class bourgeois prosperity, about which her light, soft ‘Mona Lisa’ smile suggests she is greatly delighted.

The Picasso is part of an extraordinary group of 1932 portraits of Marie-Thérèse Walter, the much younger lover of the artist. (She was 23, he was 51.) Like Moitessier, Walter wears a floral dress and sits in an upholstered chair. Likewise, her head is shown in three-quarters, not resting exactly on a raised right hand. The index digit taps her temple to evoke the classical pose of the goddess of Arcadia in a famous Roman fresco from Herculaneum.

Fingers on both raised hands of women are skeletal, languorous and at ease. Behind Walter, a framed photo of a profile head echoes the mirrored head behind Moitessier in Ingres’s portrait. There is no glamorous furniture – just a French window, the blackened panes of which suggest the darkness of the night.

Apart from these general similarities in composition, the tenor of the paintings could not have been more different. Moitessier is majestic, Walter more modest. Moitessier is dressed in luxurious floral fabric with fashionable bare shoulders, Walter in a folky blouse with puff sleeves that slides defiantly onto her side. Moitessier is elegantly correct, Walter is sloppy, boobs pop out of a see-through bustier.

Most tellingly, Moitessier’s closed fan is now an open book, which Picasso moved from the side to a central position on Walter’s lap.

The Picasso is a sex painting, the virtuous Ingres is emphatically not. That begs the question: What did the Spaniard see in the Frenchman’s masterpiece, which he had come across much earlier at a famous exhibition in Paris in 1921, that led him to use it for an entirely different painting? For me, one answer lies in optics.

Ingres spent 12 excruciating years capturing every fine detail in his portrait. Some think he used the lens of a camera lucida to portray sitters as accurately as possible, making two details surprising. Those boneless fingers by her face have multiple functions, implying her erudition in the Arcadian reference and her usual leisure time in their languor. And the specular reflection is optically wrong, by including Inès Moitissier in profile – which is impossible.

He had been attentive to Ingres since childhood, and the older painter’s intensely perceived naturalism was always convincingly manipulated to achieve expressive ends. If the specular reflection did not match the visual reality, it was secondary to his desire to frame and flatter his subject as if she were an empress on an ancient Roman coin.

Try it for yourself: The next time you kiss someone passionately, keep your eyes wide open; your lover’s facial features will disintegrate into multiple, fragmentary perspectives, all seen together. Now look at Walter’s face, seen from both the front and the side. What the eye sees was as important to Picasso as it was to Ingres.

Picasso completed his brash painting in just a few days. It’s almost an abrupt, insensitive reaction to Ingres’s painstaking refinement. (In fact, the surface of the latter is very finished and smooth, while that of the former is rough and coarse.) Through imitation, Picasso registers deep admiration for Ingres, taking possession and making the portrait his own.

On the other side of town, a stunning overview of an unexpected body of work unfolds during the great Hammer show – literally. For the first time, “Picasso: Cut Papers” collects about 100 examples of works on – and in – paper cut with scissors. Think of it as a pop-up show with three-dimensional objects, most modestly scaled and made from folded paper.

The earliest – charming silhouettes of a dog and a pigeon – date from about 1890, when the precocious artist was 9 years old. his aunt Eloisa’s little embroidery scissors.

The latest are 1962 collaborations with photographer André Villers, shot when Picasso was in his 80s. (He died at age 91.) Cutouts and fabrics were laid on camera-free photographic paper exposed to light, yielding a layered, alchemical vision of ethereal landscapes, musicians, and portraits.

The show begins chronologically and features 15 works from the 1910s, representing most of the different approaches he would take over the next seven decades. Then the cut papers are installed in revealing ways that reverberate with each other.

We associate cut paper with Matisse, whose scissors made amazing shapes from vibrant colors. Picasso’s 15 introductory works, on the other hand, culminate in a dazzling little brown paper construction of a guitar resting on a table in front of a window. It is less than 7 inches high. Negative space and positive materiality interpenetrate in an extraordinary formal condensation of the Cubist technique. It is reminiscent of Picasso’s near-life sculpture study, “Guitar” (1912) not in the show but a pivotal moment in the cubist revolution.

Speaking of the installation design, it is extremely beautiful. Paris-based Agence NC Nathalie Crinière has a dark blue-grey square room centered in the predominately white square gallery, with cutouts that pierce all four corners to view the interior and exterior spaces in layers. Some objects are in shadow boxes, while many flat sheets are placed on tilted shelves, which reach out for easy viewing. The elegant design is outspoken and generous.

Curators Cynthia Burlingham, director of the UCLA Grunwald Center for the Graphic Arts, and Allegra Pesenti, former associate director there and now independent, have grouped works into loose categories, most based on manufacturing techniques: silhouettes, torn and perforated paper, pinned and pasted , etc. (Their catalog is excellent, an essential addition to the sizable Picasso fair – no mean feat.) Bernard Ruiz-Picasso, the artist’s grandson, and his wife, gallery owner Almine Rech, and the Picasso Museums in Paris and Barcelona are the main lenders . Most of the works have been tucked away in flat binders for years, leaving them pristine and now a rare and surprising opportunity. (The show will not travel.)

A small number of the sculptures are made of folded sheet metal – a toy horse, a chair, a mother and child – reminiscent of the construction of many monumental Picasso sculptures. A sense of obsessive, curious, voracious playfulness permeates the exhibition. It is a spirit certainly akin to, yet distinctly different from, the bawdy chant that unfolds in Pasadena.