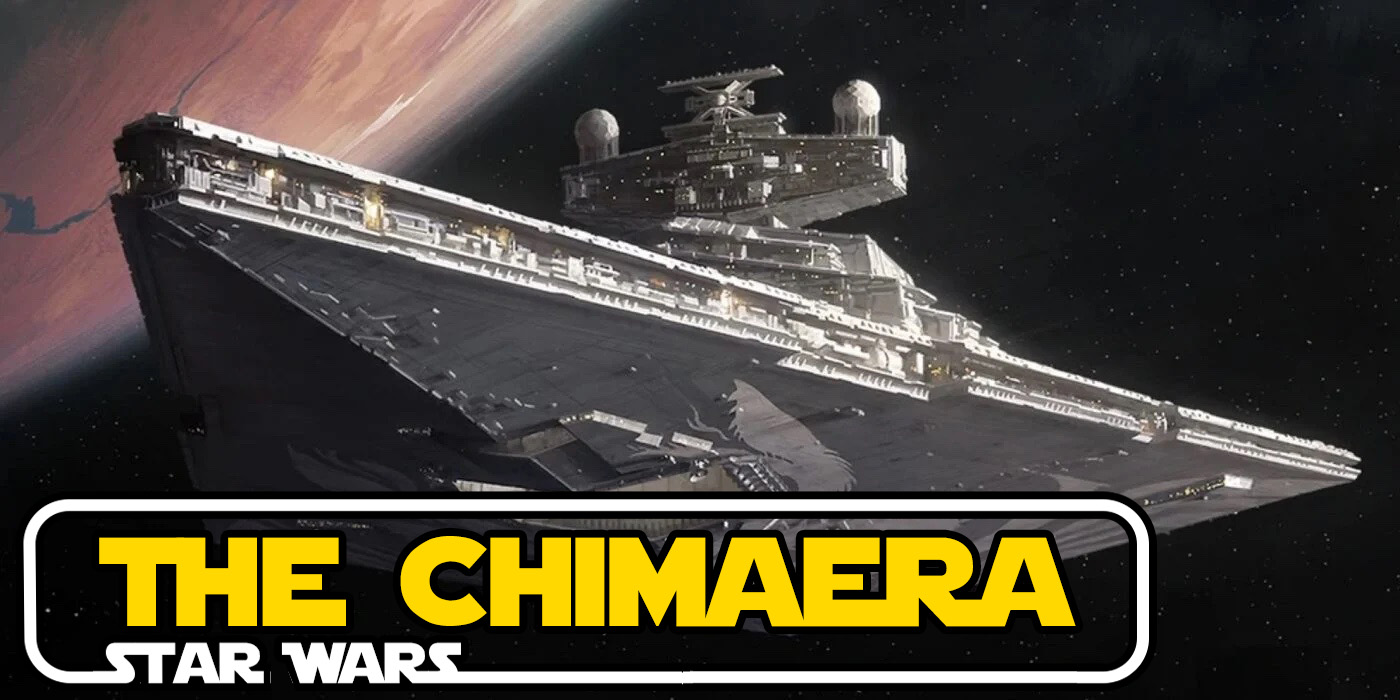 Part ship, part artwork, all deadly. We break down the modified Imperial I-class Star Destroyer, commanded by Thrawn: the Chimaera.

the ISD chimera is one of the most beautiful and infamous ships of the Imperial Navy. It was a modified imperial i-class Star Destroyer commanded by none other than the emerging Imperial officer who would become Grand Admiral Thrawn.

Under Thrawn’s command, chimera played a role in some of the most pivotal events in the galaxy. But it started his conscription as nothing more than a standard Imperial I.

Like most Imperial I-class Star Destroyers, the chimera was manufactured by Kuat Drive Yards. It measured the standard 1,600 meters by 900 meters. And it carried the stock bank of three KDY Destroyer-I ion engines and four Cygnus Spaceworks Gemon-4 ion engines.

The solar ionization reactor plant powered the various Taim & Bak XX-9 heavy turbo laser batteries and ion guns. In many ways it was a standard line model. Except for Thrawn’s changes.

Eight turbolasers surrounded the conning towers. And unlike the usual twin-barrel turbolaser turrets, chimera (and later all Star Destroyers under Thrawn’s Seventh Fleet) had eight-barreled turrets. Thrawn’s flagship was also equipped with two hangar bays, on either side of the ventral jetty. With a large door to cover the back bay, the ship could be safe but could launch its complement of fighters in all directions.

And because it carried a complement of TIE/d Defender Multi-Role starfighters, it could fire up even the fiercest battle. But perhaps most infamous of all is Thrawn’s own personal touch. At the bottom of the chimera is a large engraving of the ship’s eponymous creature.

Thrawn first encountered the image of the three-headed creature as part of Chiss’ expedition fleet. And as he rose through the ranks, so did his personal decal. Get tabletop, RPG and pop culture news straight to your inbox.

The chimera was placed under Thrawn’s command shortly after the Chiss officer was promoted to Commodore. The new Commodore and his ship were sent to pacify early rebel uprisings.

Perhaps the most notable battles that the chimera early on were clashes with a rebel group led by ‘Nightswan’. Thrawn and Nightswan fought each other for years, but Thrawn managed to keep the upper hand. Thrawn famously shot at an Imperial space station to hinder escaping prisoners, while simultaneously destroying their rescue frigate.

These early victories earned Thrawn a reputation for cunning beyond the typical Imperial commander. And with Thrawn’s growing reputation, so did the Chimeras fame. Rebels came to see the stylized chimeras as a sign of the empire’s power. When Thrawn reached the rank of admiral, he was put in charge of the Sixty-Sixth Task Force. And they were quickly called upon to quell an uprising on Batonn and Scrim Island. Thrown used the Chimeras ion guns to trigger a tsunami and managed to finally defeat Nightswan.

Thrown and the chimera found victory after victory, even against the most stubborn of rebel cells. however, the chimera was eventually lost when a herd of purrgil, drawn to Ezra Bridger’s transmissions, attached themselves to the ship and disappeared into hyperspace, taking Thrawn and Bridger with them.

They have yet to return.

May the Force be with you

Bell of Lost Souls Staff Writer and DM, JR covers RPGs of all shapes and sizes and eats sandwiches every now and then. You can ask him about both questions [email protected]