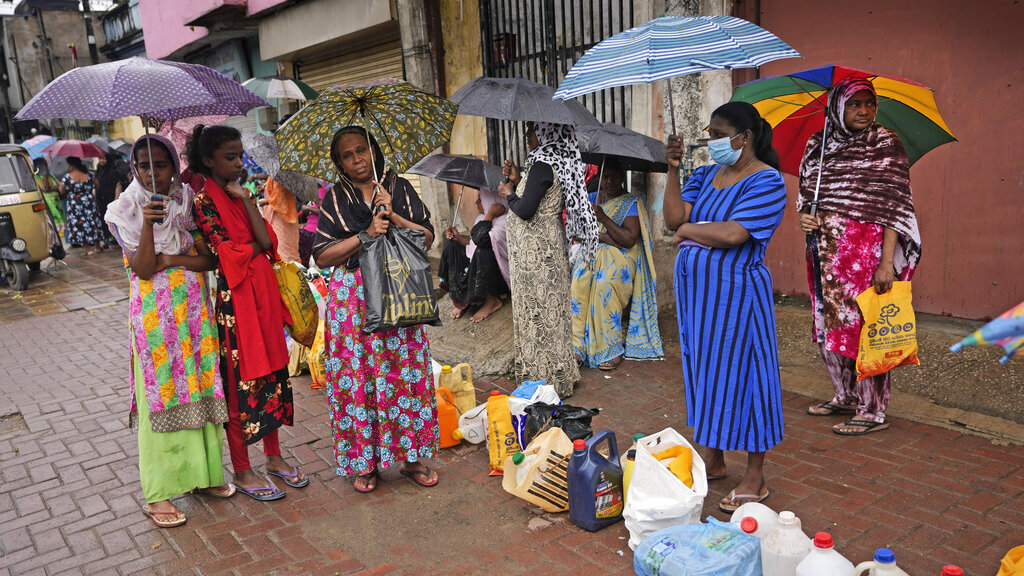 COLOMBO, Sri Lanka – Sri Lanka’s debt-laden economy has “collapsed” after months of shortages of food, fuel and electricity, the prime minister told lawmakers on Wednesday in remarks that underlined the country’s plight as it seeks help from international lenders.

Ranil Wickremesinghe told Parliament the South Asian nation is facing “a far more serious situation” than the deficits alone, and warned of “a potential plunge to rock bottom”.

“Our economy has completely collapsed,” he said.

The crisis on the island of 22 million is considered the worst in recent history, but Wickremesinghe did not mention any specific new developments. His comments seemed intended to emphasize to critics and opposition lawmakers that he has inherited a difficult task that cannot be solved quickly.

“He sets expectations very, very low,” said Anit Mukherjee, a policy officer and economist at the Center for Global Development in Washington.

Wickremesinghe’s comments also sent a message to potential lenders: “You can’t let a country of such strategic importance collapse,” said Mukherjee, noting that Sri Lanka is on one of the world’s busiest shipping routes.

Sri Lanka’s economy is collapsing under the weight of heavy debt, lost tourism revenues and other effects of the pandemic, as well as rising raw material costs. The result is a country headed for bankruptcy, with barely any money to import gasoline, milk, cooking gas and toilet paper.

Lawmakers from the two main opposition parties boycotted parliament this week to protest Wickremesinghe, who became prime minister and finance minister just over a month ago, for failing to deliver on his promises to improve the economy.

Wickremesinghe said Sri Lanka is unable to purchase imported fuel due to the high debts of its petroleum company.

The Ceylon Petroleum Corporation has $700 million in debt, he told lawmakers. “As a result, no country or organization in the world is willing to supply us with fuel. They are even reluctant to supply fuel for cash.”

The crisis is beginning to hurt Sri Lanka’s middle class, who make up an estimated 15% to 20% of the country’s urban population. The middle class began to swell in the 1970s after the economy opened up to increased trade and investment. Since then it has grown steadily.

Until recently, middle-class families generally enjoyed economic security. Now, those who never had to think twice about fuel or food struggle to get three meals a day.

“They have been shocked like no other over the past three decades,” said Bhavani Fonseka, senior researcher at the Center for Policy Alternatives in Colombo, the capital of Sri Lanka.

“If the middle class is struggling like this, imagine how hard the most vulnerable are being hit,” Fonseka added.

The situation has derailed years of progress toward relatively comfortable lifestyles pursued in South Asia.

Government officials are given three months off every Friday to conserve fuel and grow their own fruits and vegetables. According to official data, inflation for food is 57%.

Wickremesinghe took office after days of violent protests over the country’s economic crisis forced his predecessor to resign. On Wednesday, he blamed the previous government for failing to act on time as Sri Lanka’s foreign reserves dwindled.

The currency crisis has hampered imports, causing severe shortages, including medicines, and forcing people to stand in long lines to meet their basic needs.

“If at least steps had been taken in the beginning to slow down the collapse of the economy, we would not face this difficult situation today. But we missed this opportunity. We are now seeing signs of a possible relapse to a low , ” he said.

So far, Sri Lanka has been muddling through, supported mainly by $4 billion in credit lines from neighboring India. But Wickremesinghe said India could not sustain Sri Lanka for long.

It has also received pledges of $300 million to $600 million from the World Bank to purchase medicines and other essential items.

Sri Lanka has already announced that it is suspending repayment of $7 billion in foreign debt owed this year, pending the outcome of negotiations with the International Monetary Fund on a bailout package. It has to pay an average of $5 billion a year until 2026.

Wickremesinghe said help from the IMF now appears to be the only option. Agency officials are visiting Sri Lanka to discuss the idea. A staff-level agreement is likely to be reached by the end of July.

“We have completed initial discussions and exchanged ideas across different sectors,” said Wickremesighe.

Representatives of the government’s financial and legal advisers on debt restructuring are also visiting the island, and a team from the US Treasury Department will arrive next week, he said.

Krutika Pathi and Bharatha Mallawarachi in Colombo and Paul Wiseman in Washington contributed to this report.