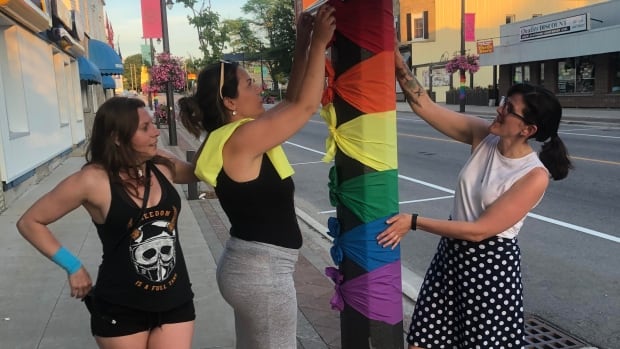 People in the city of Minto, Ontario, support the local LGBTQ community after Pride decorations were cut and destroyed in vandalism that police call hate-motivated crimes.

Between June 4 and 13, Pride flags at schools in Listowel, Harriston, Drayton and Mapleton were broken, cut and shredded, Ontario Provincial Police (OPP) said.

During the same period, streets in Palmerston and Harriston were twice stripped of virtually all Pride decorations, Const. Joshua Cunningham told CBC News.

“The focus seemed to be the eradication — complete removal — of them all,” Cunningham said in Palmerston and Harriston.

At the beginning of the month, Minto Pride members had wrapped bands of cloth around light standards along the streets of Palmerston, Harriston and Clifford, the communities that make up Minto, a city of about 9,000 residents.

A surveillance video posted to Twitter by the OPP shows a person climbing a flagpole “and manipulating, grasping and pulling the flag down,” Cunningham said. A photo distributed by police shows a rainbow flag ripped on the side and cut into six pieces.

“It seemed that the aim was not to damage the flag, but to destroy the flag,” he said. “We treat it as a hate-motivated crime.”

Message to the youth

Caitlin Hall, one of the founders of Minto Pride, said Pride flags have disappeared in recent years, but nothing of this magnitude has ever been seen.

“It goes beyond minor vices to something a little more concerning and offensive,” Hall said, adding that she is most concerned about the message being sent to young people who have seen Pride flags removed from outside their school.

“I’m more concerned about children or young people who are thinking about coming out or who have recently come out and maybe started to feel that this was a safe place… to have that very visual reminder that “Okay, there are still people out there who have a problem with me and who I am.”

Hall feels that parts of her community are still “far behind when it comes to the loving, accepting, open community that we try hard to have for Minto to be,” she said.

But an outpouring of support at a Pride event on Sunday has left Hall and Minto Mayor George Bridge feeling optimistic that the vandals are a minority in the community.

“We had over 300 people — for a small town — at our Pride picnic,” Bridge said. “In fact, there were quite a few people who came to support the event because of the past vandalism – they felt it didn’t reflect the true nature of the city, and I really believe that.”

“It was a great show of love and acceptance by the community,” Hall agrees.

Now some of those community members and businesses are teaming up to pay to replace the decorations, all of which were paid for by the Pride Committee.

Most want to remain anonymous, Hall said, and aren’t looking for acknowledgment — instead donating money to replace the rainbow fabric that was ripped from the light standards.

On Friday, they will install new cloth tires on the light stands in Palmerston and Harrison, in solidarity with Minto Pride.

“It’s business and community that really come together and don’t stand for this,” said Ron McTaggart, owner of Foodland in Palmerston.

“And that’s an example of what this community is really about.”