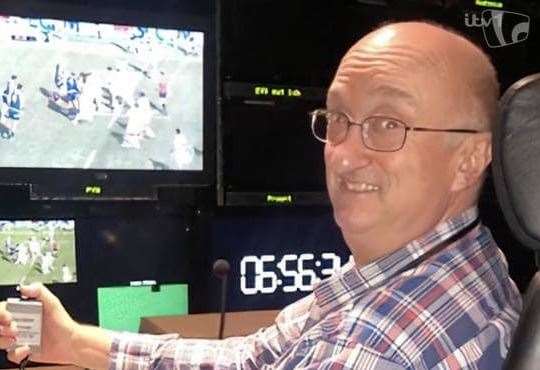 Tributes are pouring in for ITV Sport’s technical director Roger Pearce, who died suddenly in Qatar while covering the World Cup. He turned 65.

Mr Pearce lived in Maidstone and helped set up the commercial TV station TVS when it built state-of-the-art studios in Vinters Park, Bearsted. This would have been his last job before retiring in five weeks.

Maidstone Studios, who now run the complex, said today (Tuesday): “We are truly saddened to hear of Roger’s sudden passing.

“It has always been a pleasure and an honor to work here, a loyal industry veteran with a great heart.

“Our thoughts are with his family and many friends at this difficult time.”

Former colleagues have left tributes on the studio’s Facebook page.

Josephine Clark, the studio’s commercial director, said, “Roger was the nicest person I’ve met. A true legend of the industry and I will miss his fantastic storytelling and that beautiful beaming smile.”

Another, Tracey Robertson, added: “My first boss and friend at Meridian. A truly wonderful man. He will be sorely missed.”

Cinematographer Nigel Roberts said: “Roger will be fondly remembered as half of the Outside Broadcast technical team in Maidstone, along with Ludvig Zatko.”

Pearce’s death was announced on-air by sports presenter Mark Pougatch ahead of Monday’s World Cup match between Wales and the US.

He told viewers: “We have very sad news from here in Qatar. Our technical director Roger Pearce, who started his eighth World Cup here, has sadly passed away.”

He added: “Roger and his team are the brilliant people who bring you the pictures to your home and make it all happen.

“Roger was a hugely respected figure in the TV sports broadcasting industry. He has played a key role for ITV in the logistical planning and delivery of Rugby World Cups, Football World Cups and the European Championship.”

He continued, “He always had a smile on his face and left a smile on your faces. He was extremely dedicated, professional, charming and extremely popular. He will be missed by so many people in the industry and at home.”

He wrote: “So sad to hear of the passing of my friend and former colleague at ITV Meridian, Roger Pearce. He died on his last assignment in Qatar before retiring in 5 weeks. RIP Roger.”

Mr Pearce started his career as an engineer at Grampian TV and worked in other ITV regions such as TVS and Meridian before joining ITV Network Sport full time in 2001 and becoming Technical Director in 2008.

So sad to hear of the passing of my friend and former colleague at ITV Meridian, Roger Pearce. He died on his last assignment in Qatar before retiring in 5 weeks. RIP Roger.

He had worked at ITV for 43 years and died suddenly overnight in his hotel.

He would retire on December 31.

Mark Demuth, ITV Controller of Sport, said: “It is with extreme sadness and sadness that I have to tell you that Roger Pearce passed away overnight at his hotel in Qatar.

“I appreciate this desperate news will come as a great shock to everyone. His immediate family has been notified, as has the team working here in Doha.

“Roger has been such a popular figure in the department for many years. Everyone who worked with Roger enjoyed his company and couldn’t help but smile when he was around.

“Roger was the person who made it all happen – whether he was on site at a small non-League ground or working on a complex technical operation like this World Cup.

“Everyone is currently feeling numb and sharing a terrible sense of loss.

“Let’s take care of each other, as Roger would have, and never forget the incredible contribution he made to the department and to our entire lives. Roger was one of a kind.”

ITV paid a brief tribute to Mr Pearce during his football coverage tonight.