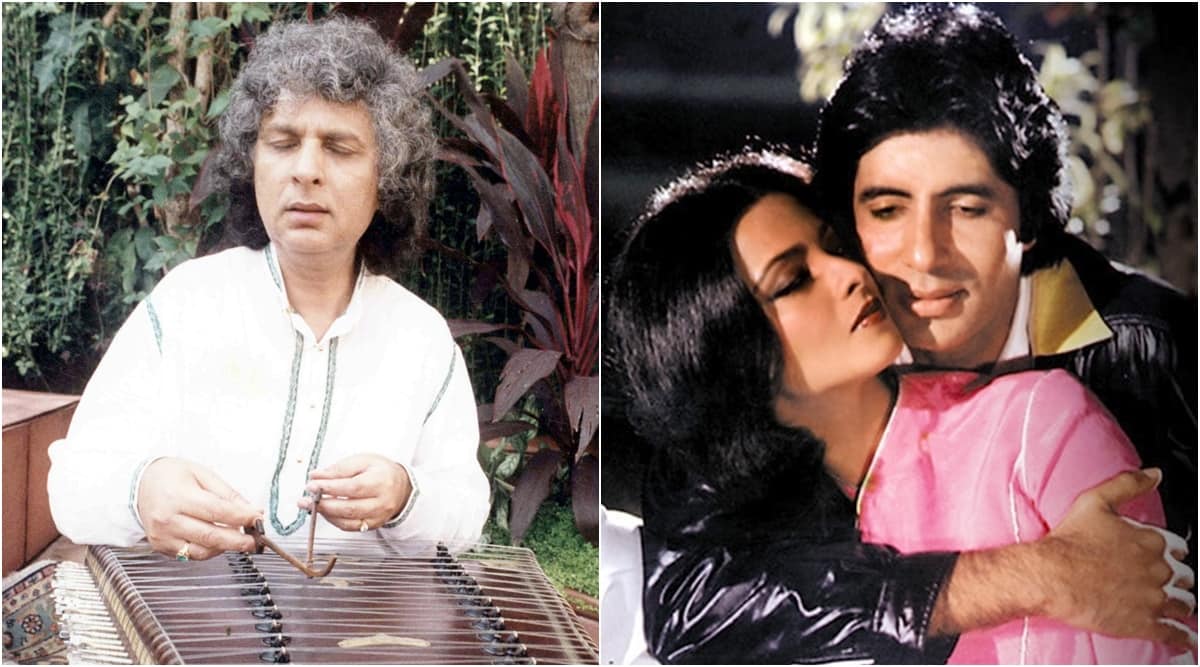 Shivkumar Sharma’s image of playing a santoor will remain etched in our memory forever. The music icon, who passed away on Tuesday at the age of 84, has left behind a body of work that will remain a reference in Indian classical music for generations. Sharma can be credited with popularizing santoor in India while his son Rahul Sharma continues to carry on the legacy.

As India mourns the demise of the legend, we look back on Shivkumar Sharmamusical trajectory, which also focused on Bollywood.

Shivkumar Sharma was one half of the composer duo Shiv-Hari with classical flautist and another legend, Hariprasad Chaurasia. The conductors gave countless memorable tunes to Hindi movies along with some notable classical notes.

Shivkumar started his stint in films with the background music in Jhanak Jhanak Payal Baje (1956), directed by V. Shantaram. He later recorded his first solo album in 1960.

He had previously spoken about Jhanak Jhanak Payal Baje. “Vasant Desai (music director) didn’t understand the technicalities of the santoor and generally left me to explore and play as I wanted,” he had previously told DNA.

The Santoor legend added that V. Shantaram was very impressed with his work and eventually offered him his next project too: Toofan aur Diya. “I thanked him profusely and apologized saying that I wanted to complete my education the way my father wanted and went back to Jammu,” he said.

Shivkumar’s first collaboration with Hariprasad Chaurasia was their concept album, Call of the Valley in 1967, along with guitarist Brij Bhushan Kabra. Soon after, Shivkumar and Hariprasad teamed up as Shiv-Hari and composed music for their first film, Silsila (1981). Directed by Yash Chopra with Amitabh Bachchan, Rekha, Jaya Bachchan and Sanjeev Kumar. Shiv-Hari also had Amitabh sing two songs in the hit movie – “Neela Aasman So Gaya” and “Rang Barse”. Shivkumar revealed that as an ode to Jhanak Jhanak Payal Baje, bhajan “Jo Tum Todo” even in Silsila†

In his words, “We had no idea Silsila’s music would catch on as much as it did.” He told PTI: “I remember when Yash Chopra asked me and Pandit Hari Prasad Chaurasia to compose music for Silsila, everyone thought he was taking a big risk by contracting classical musicians. There is a difference between classical music and film scores. And it was a huge challenge to make (film music) a reality.”

Shivkumar Sharma and Hariprasad Chaurasia worked together for over ten years before breaking up. “Hariji and I made movies as long as it didn’t interfere with our classical music. Later it became difficult because we were both touring,” he told DNA.

He said in a PTI interview: “Music has a very short shelf life, songs these days. Old songs are still remembered and people like them even now. I doubt any song of late has caught my attention.”

Shivkumar also had to refuse Dil Toh Pagal Hai, despite Yash Chopra sending him tickets to travel back from Jammu. But Shivkumar’s talent was not just limited to his santoor. He once revealed that he was even offered a role in a movie. This was when he was shooting for filmmaker Khwaja Ahmed Abbas. ‘He called me aside. I thought he wanted to tell me something specific, but he offered me Saat Hindustani as an actor. ‘Dikhate-bolte bhi theek ho… kad-kaathi bhi sahi hai.’ (You look good, speak well. You even have a decent personality). I folded my hands and said I wanted to make music,” Shivkumar said.

He stayed away from Bollywood after Darr in 1993. He believed that a filmmaker’s taste influenced music, which was heavily influenced by ‘western beats and has more noise than melody’.

“We are such great imitators of even mediocrity,” he believed. According to him, the current era lacked the “right kind of directors to work with”.

Shiv-Hari continued to do live shows together even after he gave up composing for movies.

Shivkumar Sharma and Hariprasad Chaurasia received nominations for Best Music Director Filmfare for Silsila, Chandni, Lamhe and Darr. The santoor legend was also awarded the Sangeet Natak Akademi Award in 1986 and the Padma Vibhushan in 2001.