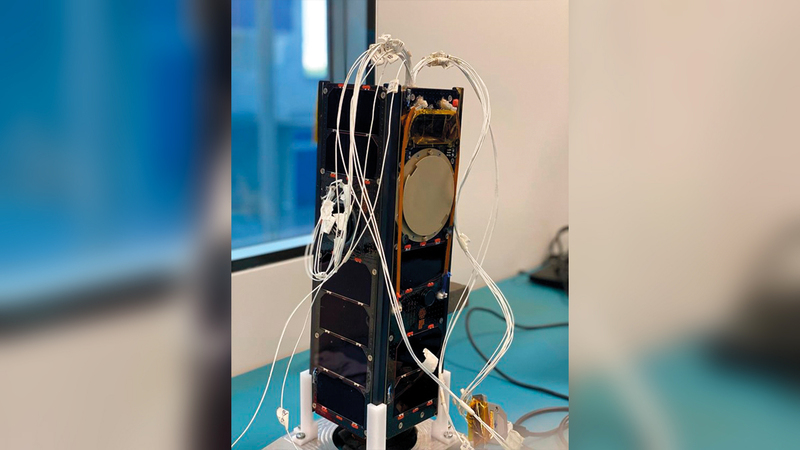 The President of the University of Sharjah and Director General of the Sharjah Academy for Astronomy and Space Science and Technology, Dr. Hamid Majul Al Nuaimi, have announced that it has been decided to launch the cube satellite “Sharjah Sat-1” on Sunday December. 18, 2022, by SpaceX aboard the Fulkan rocket from Florida in the United States of America. He will be sent to the United States next Tuesday after the final exams have been taken.

Al-Nuaimi told Emirates Today that the cost of the satellite is about three million dirhams, and it included materials for the satellite and its accessories, fabrication, the design and operations lab and its computer programs, in addition to the launch costs, noting that it program is the result of collaboration between several international universities, including the University of Sharjah, and the Istanbul Institute of Technology, where dozens of Emirati students installing the satellite were trained under the supervision of the engineers of the Sharjah Academy of Astronomy and Space Science and technology, over the past three years.

He stated that the moon (Sharjah Sat-1) has two missions through two payloads, and the main payload is the developed X-ray detector, which studies the radiation from the sun and some celestial bodies in the Milky Way, and the magnitude of the effect of X-rays on the planet’s space weather The sub-beam consists of two optical cameras for imaging the Earth’s natural resources; The satellite’s primary mission is a scientific exploration mission to the sun, as well as training students to create small satellites.

He explained that the lifetime of the (Sharjah Sat-1) satellite is three years, but it is possible to exceed this period to more than that, depending on the influence of the sun on the ionosphere of the planet’s atmosphere, because the orbit of (Sharjah Sat-1) around the Earth is not greater than 550 km.; It is located at the limit of the Earth’s atmosphere.

He stated that the design and work in (Sharjah SAT-1) was based on previous experiments with cubic satellites from the US, Russian and European space agencies; Aerospace engineering relies on different expertise in all engineering fields, noting that the moon was manufactured at the Sharjah Academy of Astronomy and Space Science and Technology by Emirati researchers, in collaboration with the Colleges of Science and Engineering at the University of Sharjah and Istanbul Technical University within a research collaboration agreement.

He explained that cube satellites get a lot of attention from universities and educational institutions because of their small size and low cost, in addition to their manufacturing speed compared to large satellites. Therefore, cube satellites are an effective educational tool to encourage students to design, manufacture, test and experience various space missions.

He continued: “One of the objectives of our first space mission (Sharjah Sat-1) is to broaden the perception of students and the general public and familiarize them with the field of space, from the design of these space missions to their launch, by preparing various workshops and practical and theoretical events, in line with the direction of the UAE to build a generation capable of meeting the challenges of technological development in the space industry.”

Al Nuaimi emphasized that the (Sharjah Sat-1) project contributed to the establishment of the Cube Satellites Laboratory at the Sharjah Academy for Astronomy and Space Science and Technology, by providing the necessary tools to develop more future space missions. During the period of work on the project, the laboratory was provided with the facilities needed to design and operate the satellite, including the powerful workstation equipped with the required software to design, simulate and analyze the mission in the space environment, and the ISO6 certified cleanroom intended for installing satellite systems in an environment free of harmful substances.In addition to the ground station, which operates on different frequencies such as VHF/UHF, which are needed to communicate with the satellite when it is in orbit in space.

“The (Sharjah Sat-1) design is based on previous experiments with cubic satellites from international space agencies.”