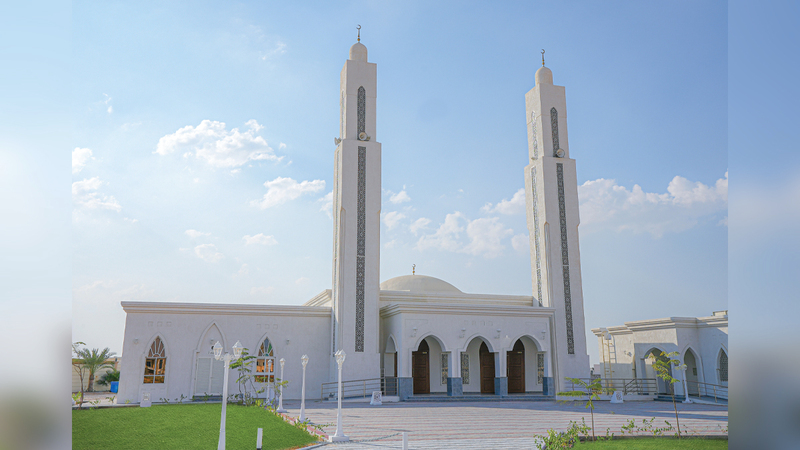 The Ministry of Islamic Affairs in Sharjah opened the “Sidrat Al-Muntaha” Mosque at Al-Morada 2 in the Al-Siuh suburb of Sharjah, with a capacity of 450 worshippers, both male and female, as a continuation of the annual plan of the department for the year 2022; To keep pace with the renaissance and urban sprawl in the emirate, to meet the needs of the inhabitants of the emirate and to facilitate the performance of rituals with ease and reassurance.

The inauguration was attended by the head of the Islamic Affairs Department in Sharjah, Abdullah Khalifa Yarouf Al-Sabousi, accompanied by the donor to build the mosque, members of the opening committee of the mosque in the department and the people of the region.

The mosque is built according to the Islamic architectural style mixed with modern character, with a round dome in the center and two minarets 25 meters high. It was built on an area of ​​4,466 square meters, including the mosque, which can accommodate 450 worshippers, including 60 for the prayer hall for women, and the service facilities such as ablution, toilets, housing for the imam and parking for vehicles.

Al-Sabousi stressed that the distinction and uniqueness of the Emirate of Sharjah is in the mosques scattered all around and around it; It stems from the interest and support of His Highness Sheikh Dr. Sultan bin Muhammad Al Qasimi, member of the Supreme Council and ruler of the Emirate of Sharjah, who bestows upon mosques most of his attention and personal follow-up, generous and unrestricted support, and assigns them the best and most eminent lands in the emirate, indicating that the department is following the approach of the ruler of Sharjah. In the care of mosques as it provides all facilities and services to donors and benefactors in the emirate to financially support mosque construction and architecture projects.

He pointed out that the opening of the mosque is a continuation of the department’s annual plan and within its continued efforts to keep pace with the development plan of the Emirate of Sharjah, and a continuation of the Emirate of Sharjah’s approach to construction and building mosques in all suburbs and regions. To facilitate the arrival of the inhabitants of the Emirate to the Houses of God and to facilitate the performance of their rituals with ease and reassurance, and to provide an atmosphere of faith and all means of comfort and reassurance to mosque visitors.