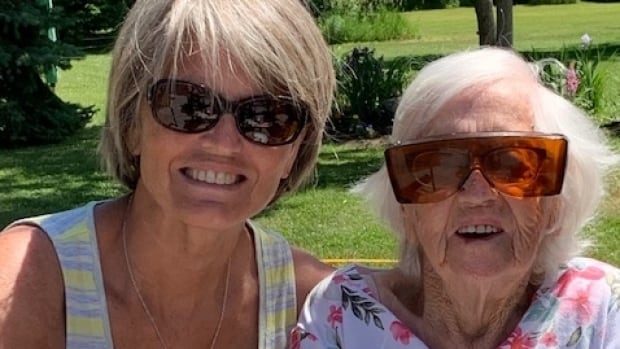 Elva Mitchell’s 99-year-old mother, Kay Richardson, was living independently until just over two years ago, when she moved into a seniors’ residence outside Halifax, NS Then the pandemic hit.

“It shuts the world down,” Mitchell said. “It went from some confusion to almost full blown confusion. The pandemic robbed her of her last couple of years.”

Mitchell pulled her out of the residence, moved her to Ontario, and into her own home in the village of Richmond, located in the outskirts of Ottawa.

But caring for her mother, whose dementia worsened, was difficult.

“She was up through the night. Frequently. And my mother doesn’t sleep a lot in the daytime. She’s not a big napper. So it meant that I was with her 24/7,” said Mitchell.

When an opening came up at Carefor Richmond Care Home, a kilometer from Mitchell’s home, “we chose to make the move for her.”

Richardson is now one of 16 residents, all of whom have cognitive issues related to dementia or Alzheimer’s disease. Many have issues with “sundowning” — increased confusion or anxiety late in the day, wandering or trouble sleeping through the night.

3 sensors in a room

The care home has partnered with esprit-ai, a west Ottawa company that uses 5G technology to keep seniors safe, using a system of electronic sensors.

The sensors detect when a resident gets out of bed, or is wandering in their room, or opening the door and potentially waking other residents.

Robin Meyers, director of community support services and personal support services with Carefor, describes a scenario where one restless resident can wake a half-dozen others, and overwhelm nighttime staff.

“If you could just know that person is up and maybe needs to use the bathroom or requires a little bit of comfort or support, then you could prevent the rest of the people from getting up and having this restless night.”

That’s where the early warning signals generated by the sensors are helping. One flat sensor is placed under the bed clothes and mattress protector, another is mounted high up on the wall, and a third contact sensor is on the door. They’re designed to be inconspicuous.

“Like any human being, we don’t want to be watched. We don’t want to feel like we are a prisoner. So we want it to be totally, if possible, completely invisible,” said Patrick Tan, president of esprit -ai.

“It’s about dignity. … I don’t have to shout to the world that I need help.”

When a resident triggers one of the sensors, a signal is sent to the servers at esprit-ai. The raw data is analyzed and if action is warranted, an SMS text message is sent to the overnight staff.

Meyers says the system is helping staff be more strategic in their responses. If they knew a particular resident had a very restless sleep, they can be on the lookout for an increased risk of falling the next day.

Staff can also use information gleaned from the sensor analysis to pick up on behavior patterns that may suggest a need for a change in routine, or lead to less medication.

Mitchell sees the sensors as an added layer of protection for her mother. But she’s also glad the toonie-sized sensors are discrete.

“We don’t need alarm bells ringing. The unobtrusiveness of this device allows the staff or a family to keep a loved one safe without it being in their face,” said Mitchell.

Tan hopes to expand the esprit-ai system beyond seniors’ residences into private homes. The sensors cost $200 per resident to install, but monitoring and analyzing the raw data requires a subscription that costs $80 per month.

Mitchell believes access to this technology might have allowed her to keep her mother at home longer.

“I’ll be honest, I’m surprised it’s taken us this long to get there,” said Mitchell.

Carefor is considering whether to expand the sensor program to two of its retirement homes in Pembroke, Ont.