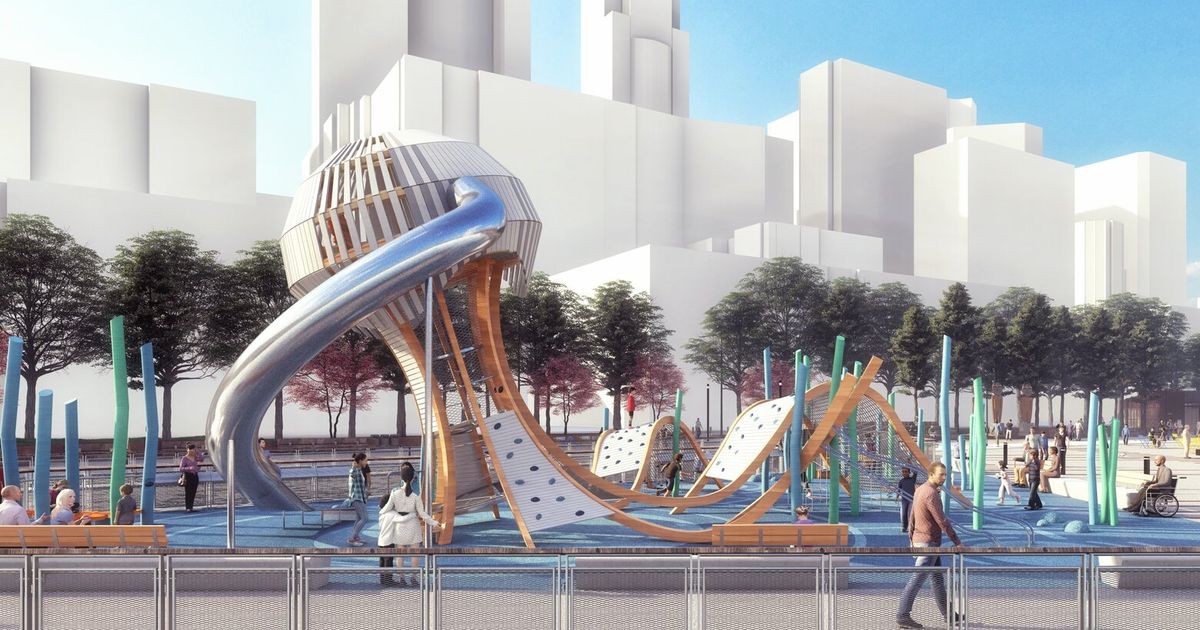 An 18-foot-tall jellyfish comes to the waterfront of downtown Seattle.

Work began Monday on the city’s new Pier 58 park, which features scenic views of Elliott Bay and the Olympic Mountains, an orchard, raised lawn, event plaza and a marine-themed and jellyfish-themed playground. inspired structure for children to climb up, balance and slide down. It should be ready by 2025.

The project is part of a massive, decades-long waterfront renovation that has already included the construction of a new seawall, the deconstruction of the Alaskan Way Viaduct, and the digging of a new 2-mile Highway 99 tunnel.

The new pier will be located between the Great Wheel and the Seattle Aquarium, on the same site as the old Pier 58, a wooden plank park with benches and telescopes that partially collapsed in 2020.

The city initially planned to remove the old pier in 2022, but ordered an emergency demolition when officials discovered the pier was beginning to peel off the land. The section that collapsed during demolition was supported by steel-sheathed concrete posts that had been rusting for years. Trees, a concrete patio and a bronze fountain collapsed when the posts gave way.

A digital system set up to monitor the pier’s movement sounded the alarm seconds before the collapse, allowing five workers to escape. Two workers were thrown into the water, but somehow only suffered minor injuries.

Responding to the collapse and cleaning up the wreck, which involved sending divers to Elliott Bay and removing the 4-ton fountain from the water, increased demolition costs by more than $1 million.

The city is paying a $34.5 million contractor to build the new Pier 58 and remove another old pier, which is located elsewhere on the waterfront.

Work on Pier 58 will be performed primarily from barges in the water, with intermittent sidewalk effects, according to the Seattle Office of the Waterfront. Once the workers have removed the last piles from the old pier, they will install about 120 new steel piles using a vibratory piling machine. Then they build the deck with concrete and install the park landscape on it.

The design of the new pier includes an open water area. As elsewhere along the waterfront, a semi-transparent walkway between the pier and the land allows sunlight to reach the water and the migrating salmon.

The Pier 58 park will connect to a boardwalk that is currently under construction, adjacent to a new Alaskan Way. Work began in June on a pedestrian bridge stretching Alaskan Way between Pike Place Market and the waterfront, which is also home to a new Seattle Aquarium pavilion.

The bronze fountain of the old Pier 58, designed by the late Seattle artist and architect James FitzGerald, has been restored since it was recovered from the water and will be incorporated into the new park, as well as a new sculpture by Coast Salish artist Qualsius Shaun peterson.

Downtown parents told the city they wanted a playground, said Angela Brady, director of the waterfront overhaul. “To my knowledge, there has never been a waterfront playground,” she said. “We’re super excited about that.”

The city had known for years that there were problems with the old Pier 58. When it started breaking down in 2020, officials used an emergency policy to bypass a public solicitation for bids and approved a removal plan within weeks.

Pacific Pile and Marine, which was not invited to undertake the demolition work in 2020, was selected in June to build the new Pier 58. The company’s contract also includes the removal of the dilapidated Pier 63, which is located between the Seattle Aquarium and Bell. Harbor Marina. Pacific Pile and Marine recently replaced the adjacent Pier 62, a wide-open park space.