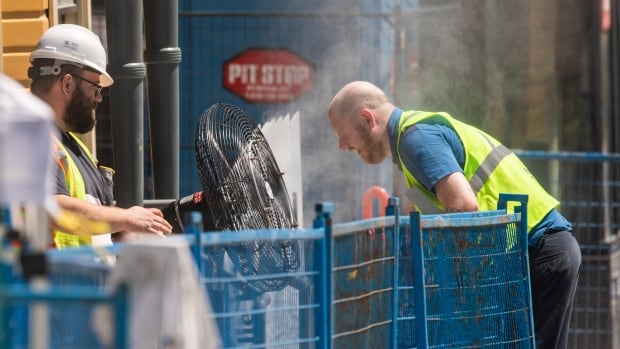 Unbearably high temperatures are already testing the limits of human survival and will continue to rise, testing our bodies’ ability to cope and making parts of the world increasingly uninhabitable.

Scientists say urgent steps are needed for people to adapt to extreme heat, including rethinking the way we live, work and blow the AC.

“Extreme heat will become more problematic in the future, period,” said Professor Blair Feltmate, head of the Intact Center on Climate Adaptation at the University of Waterloo in Ontario.

In India and Pakistan, temperatures recently soared to 50°C, killing at least 90 people and destroying agricultural crops. South Asia, along with Africa, Australia and the US Gulf States, now faces potentially deadly combinations of heat and humidity — conditions scientists didn’t expect until later this century.

Canada is also feeling the effects of extreme heat: 595 people died from the heat in British Columbia last summer. The village of Lytton, BC, set a new Canadian heat record (49.6 C) on June 29, before being destroyed by a wildfire the next day. The same “heat dome” left the ground parched, contributing to catastrophic flooding in BC months later.

Feltmate is one of the authors of a recent report warning of a “possibly deadly future” for Canadians in terms of heat, especially those living in the southern interior of BC, along the US border in the Prairies and in southern Ontario. and Québec.

“We’re going to experience extreme heat that will make what we saw in British Columbia last year during the heat dome appear relatively mild,” Feltmate said.

How heat affects our body

Being exposed to heat for a long time can make you feel sluggish because your organs work harder to keep you cool and alive.

Your heart beats harder to push blood to your skin, where it can cool. Sweating is also essential for cooling your body, but it gets harder as the humidity increases.

In extreme cases of heat stroke, your body essentially begins to boil, breaking down cells and causing organ damage.

“The reason it goes from a liquid to a solid white mass is because the proteins have changed…If your body just keeps heating up and can’t control the temperature, eventually your proteins will do the same in your cells.”

Sitting in the shade and drinking water is not enough if you already suffer from heat stroke. “It is crucial to cool down” [an overheating person] down as quickly as possible, ideally by submerging them in water as cold as possible,” Cheung said.

Being too hot before bed also makes it hard for us to sleep, which can lead to poor decision-making, injuries, and adversely affect people’s mental health, says Michael Brauer, a professor at the Population School of Human Rights. the University of British Columbia and public health.

“Night temperatures are very important. It’s really trying to get your bedroom cool enough, get your body cool enough to sleep.”

For anyone assuming they can train their bodies to handle the rising heat, Cheung — who helped Canadian athletes prepare for the heat and humidity at last year’s Tokyo Olympics — says it’s to some extent. height is possible. Our body’s core temperatures can adapt to higher heat over a period of about two weeks of gradual, continuous exposure.

But “in terms of global warming, it’s a plaster solution.”

“The biggest advantage humans have over other animals, in a sense, is our behavior — that we can develop things like housing, air conditioning, better clothing, and so on,” Cheung said. “But that comes at a price, whether it keeps us indoors or increases air conditioning power consumption.”

Many people are unable to stay indoors and keep a cool head, including those who have to do physical exertion outside the home, such as farmers and manual workers.

Going forward, Feltmate says, the workday will have to shift so those workers can avoid the hottest part of the day, such as starting work at 5:30 a.m. and finishing at 1 p.m.

Cities themselves need to be cooled, which means designing and adapting buildings with heat in mind, planting more trees and painting roofs white to reflect light rather than absorb it, Feltmate says.

He also says it’s critical for residential buildings to have a backup power supply to ensure air conditioning and fans continue to operate in the event of a heat-induced blackout.

A lack of urgency

As simple as these measures may sound, Feltmate says Canadian cities and governments are not moving fast enough, despite warnings of the potential for devastating loss of life from extreme heat.

“What is especially lacking is a lack of appreciation for the need to act urgently to take adaptation measures.”

Adapting also means planning for when places actually get too hot for human livability, as will be the case in parts of the Persian Gulf, South Asia, Central America and West Africa before the end of the century.

“There are real thresholds that our bodies can take even when you’re acclimated, and the Gulf region is starting to exceed those thresholds more and more,” said Cascade Tuholske, a researcher at Columbia University’s Center for International Earth Science Information Network, whose research targets when exposed to lethal urban heat.

Poorer countries where people rely on subsistence farming could see mass migration to cities, which are themselves ill-equipped to cope with the increasing heat.

This is why global solutions to climate change are so important, Tuholske said.

“I really doubt the livability of many of the most populated places on Earth because of extreme heat without adaptation. The future really depends on the present and how much we reduce the heat now.”