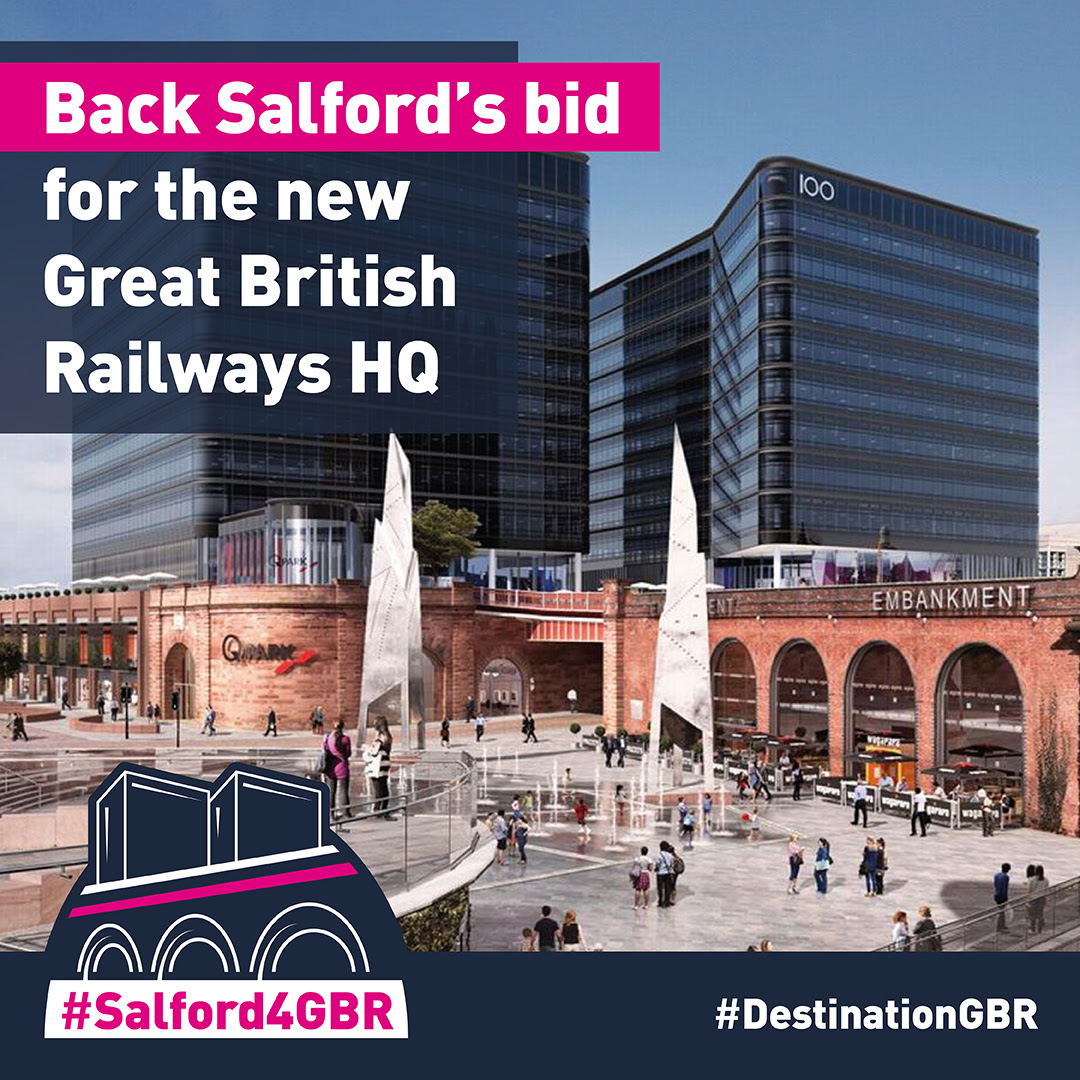 Salford City Council announced today that it is bidding for Salford as the home of Great British Railways (GBR).

The City has submitted our offer to the Government through the Greater Manchester Combined Authority (GMCA), which is proposing to build Embankment, a modern and sustainable city center office building complex, as its new home base.

Salford is a city rooted in the history of rail and we believe there is no better city-region than Greater Manchester for GBR headquarters that would match the government’s ambitions to raise the standard.

“Not only are we closely linked to this country’s railway history through figures like George Bradshaw and the father of railways, George Stephenson, but we are a city that has always been at the forefront of travel. From the first horse-drawn carriages to the first steamboats, our history as Salfordians is rooted in improving the way we get around.

“We are now a thriving digital city, one of the fastest growing in the region and developing a significant skills and media cluster to rival anywhere in Europe. Greater Manchester has also become one of Whitehall’s main outposts outside of London and is home to several key government departments that have brought decision-making to our doorstep.

“However, as we continue to build a better future for our city, we continue to be home to communities in serious disadvantage. The jobs, job opportunities and investments of GBR’s new headquarters could be critical to helping us tackle key inequalities in Salford.

“It would be the perfect example of the leveling this government wants to bring about for communities in the Northwest.”

Embankment 100 the proposed site for GBR’s headquarters is within walking distance of Manchester Victoria, which is at the center of the North West rail network. Embankment was built on the site of the original Manchester Exchange station, which once had the longest platform in Europe at 682 meters and could accommodate three trains at a time.

The town was home to the famous cartographer George Bradshaw, whose famous railway maps and timetables, Bradshaw’s Guide, made famous in Michael Portillo’s Great British Railways Journeys series on the BBC, was first published in Salford in 1839. Mr Bradshaw is born and raised in the Pendleton area of ​​the city.

It was in Salford where one of the greatest railway achievements took place when George Stephenson, the ‘father of the railways’ ran the legendary locomotive ‘Rocket’ through Salford during the historic Rainhill Trials in 1829. And it was also here in Salford where William Huskisson MP, became the first railway casualty when the aforementioned rocket ran over him in a tragic accident that made millions around the world aware of the arrival of steam engines in 1830.

Stephenson also built the Grade I listed River Irwell Railway Bridge which was central to the continuation of the line from Liverpool to Manchester and significantly advanced rail operations across the country.

Salford has a history of celebrating its railway history and in 2015, a locally led project from the Hamilton Davies Trust transformed Irlam Station back to what it looked like in 1894, complete with a beautiful station building, cafe bistro and meeting room.

Salford is the 18th most deprived local government in the country and has several communities just two miles away from the city center, which are in the top 1% of the most deprived nationally.

The unemployment rate (6.6%) and Universal Credit claims (31,645) are still significantly above pre-pandemic levels. Communities are in dire need of the jobs, skills, training and investment that the arrival of GBR could bring to our city.

Despite this, Salford is also the fastest growing economy in the region, with 15,000 additional jobs in the past five years and 2,000 new businesses registered.

We have seen rapid growth in the office economy around the city centre, Media City, Salford Quays and in new locations such as Greengate.

Salford is a city where businesses choose to locate and people routinely move to other locations and this trend will only continue as the city’s population grows.
Not only do we offer a space for GBR to move into, but it is also one of the most sustainable buildings in the metropolitan region, with a BREEAM ‘Excellent’ rating.

Salford City Council is working with organizations and partners across the city and the GMCA on the offer, which was submitted to the Great British Railways Transition Team in March 2022 with the support of Manchester’s incoming investment agency, MIDAS.

Residents, businesses and visitors can find out about the offer by supporting us on their channels and sharing the hashtag #DestinationGBR and #Salford4GBR.

The headquarters shortlist will be announced in May 2022, followed by a public vote and the winner is expected to be announced later this summer.