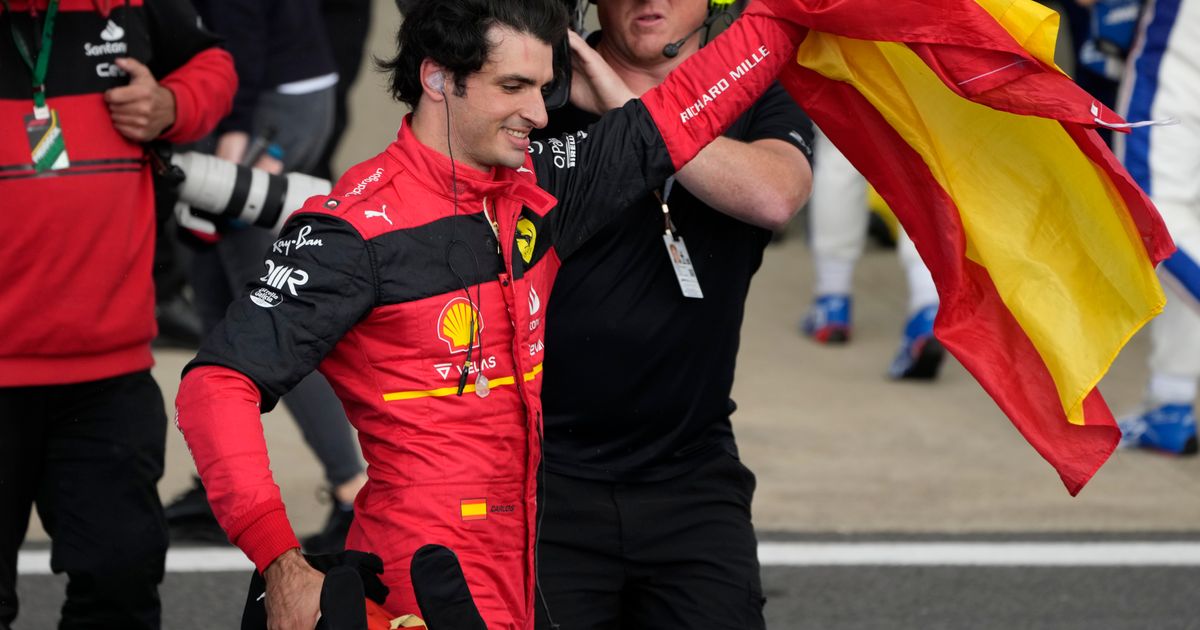 SILVERSTONE, England (AP) – Carlos Sainz Jr. won his first Formula 1 race of his career on Sunday with a victory in the British Grand Prix – the most dramatic race so far this season. It started with a terrifying crash on the first lap and ended with intense wheel-to-wheel battles for the podium places.

Sainz was in the lead with Charles Leclerc close behind and although Ferrari initially said they were “free to fight”, the Italian team then asked Sainz to let Leclerc pass so as not to lose any time on Lewis Hamilton.

But a safety car came out and Ferrari brought Sainz to the pits for fresher, softer tires with more grip. Leclerc was left on older, hard tires and Sainz soon passed his teammate to retake the lead and drive away for his first win in his 150th F1 start.

“We did it. Yes! We did it! Yes! Vamos!” the Spanish driver via radio Ferrari.

Sergio Pérez passed Hamilton and Leclerc after the restart and finished second behind Sainz. Hamilton was briefly second after passing both Pérez and Leclerc in a three-way move, but was unable to hold on to his position and fell back to fourth.

Hamilton then shot past Leclerc in a fierce battle for third place. He also led laps for the first time this season on Sunday.

“I gave it my all,” said Hamilton, who finished third in Canada two weeks ago and hoped Mercedes will make a comeback. The team has failed to challenge Red Bull and Ferrari for wins this season, but an additional upgrade to the Mercedes ahead of this weekend has been promising.

“We need to make some improvements, but this is a huge bonus for us to be on the podium,” added Hamilton.

Max Verstappen, the defending F1 champion and current leader of the standings, fell out of the lead with damage to his Red Bull after driving over rubble. He struggled for grip and finished seventh.

Pérez said his race was a “great comeback” after falling back early in the race following damage to his front wing while racing Leclerc and Verstappen.

The race was almost immediately red flagged as it started when a crash in the first corner left Zhou and Albon requiring medical treatment.

Zhou’s car flipped upside down and ran over a tire barrier before crashing into a fence. Pierre Gasly had thrown George Russell’s Mercedes against Zhou’s rear wheel, causing the Chinese driver’s Alfa Romeo to flip over. As drivers tried to avoid that crash, Albon was slammed sideways into the pit wall.

Zhou was treated at the track’s medical center and Alfa Romeo said he was not seriously injured, while Williams said Albon had been taken to hospital by helicopter for “precautionary checks”.

Russell, who left his car to help Zhou, was also unable to resume the race.

The “halo” device protecting Zhou’s head was scraped back to bare metal after being dragged through the gravel and ripping off a piece of the air intake behind the driver.

A group of anti-oil industry protesters ran onto the track and sat down during the chaos following the crash. F1 said they were “handled by the local authorities”.

Verstappen had passed Sainz on the original start but had to do it all over again when the race was restarted after the multi-car crash involving Zhou. Sainz held onto the start, but Verstappen took the lead when Sainz lost control and ran off the track.

Verstappen soon fell behind both Ferraris after reporting a possible puncture from debris.

Verstappen said his car was “100% broken” with little grip and compared it to “driving on ice”, but his Red Bull team said it was safe to continue.

The crowd cheered Verstappen’s misfortune as he was passed by the Ferraris. The Dutch driver is unpopular with some British fans after a bitter title rivalry with Hamilton last year when the two crashed at Silverstone.

Former champion Nelson Piquet used racist insult and homophobic language to describe Hamilton, F1’s only black driver, in interviews from last year that gained more attention this week. Verstappen is dating Piquet’s daughter, Kelly, and was criticized by fans for saying Piquet was not a racist despite using “highly offensive” language.

Two-time champion Fernando Alonso finished fifth for Alpine in his best result of the season on Sunday, ahead of Lando Norris for McLaren and then Verstappen. Mick Schumacher, son of seven-time champion Michael Schumacher, took his first career points in eighth for Haas, with Sebastian Vettel in ninth for Aston Martin.

Haas had its first double points finish since 2019 when Kevin Magnussen took 10th.