These are the latest updates:

Zelenskyy visits cities at the front in eastern Ukraine

Ukrainian President Zelenskyy has said he has visited two towns near the front lines of fighting against the Russian army after meeting with troops in the Zaporizhzhya region.

“After that I went with the head of [my] office in the east. We were in Lysychansk and Soledar,” Zelenskyy said in his nighttime video.

Ukraine has said its forces control half of the strategic eastern city of Severodonetsk as Kiev’s army repels Russian troops in the battle for the Luhansk region.

But Luhansk governor Serhiy Haidai said they expect a major counter-attack from Russian troops in the coming days.

“Our armed forces have cleared half of the industrial center of Russian troops,” Haidai said on his official social media channels. “In the next five days there will be a big increase in the number of heavy artillery shelling.”

For nearly two weeks, NATO began a US-led naval exercise in the Baltic Sea with more than 7,000 sailors, pilots and marines from 16 countries, including two aspiring to join the military alliance, Finland and Sweden.

The annual BALTOPS naval exercise, which began in 1972, is not conducted in response to a specific threat. But the military alliance said: “with the participation of both Sweden and Finland, NATO is seizing the opportunity in an unpredictable world to increase its joint resilience and strength”, along with two Nordic aspiring countries.

Finland and Sweden both have long histories of military non-alignment before their governments decided to join NATO in May, a direct result of Russia’s February 24 invasion of Ukraine.

Russia targeted Western military supplies for Ukraine and launched airstrikes on Kiev that it claimed destroyed tanks donated from abroad.

Ukraine said missiles aimed at the capital hit a train repair shop. Elsewhere, Russian airstrikes in the eastern city of Druzhkivka have destroyed buildings and killed at least one person, an official said.

Residents described waking up to the sound of rocket attacks with debris and glass falling around them. “It was like in a horror movie,” said Svitlana Romashkina.

Before the morning attack, Kiev had not faced such Russian airstrikes since the visit of UN Secretary General António Guterres on April 28. 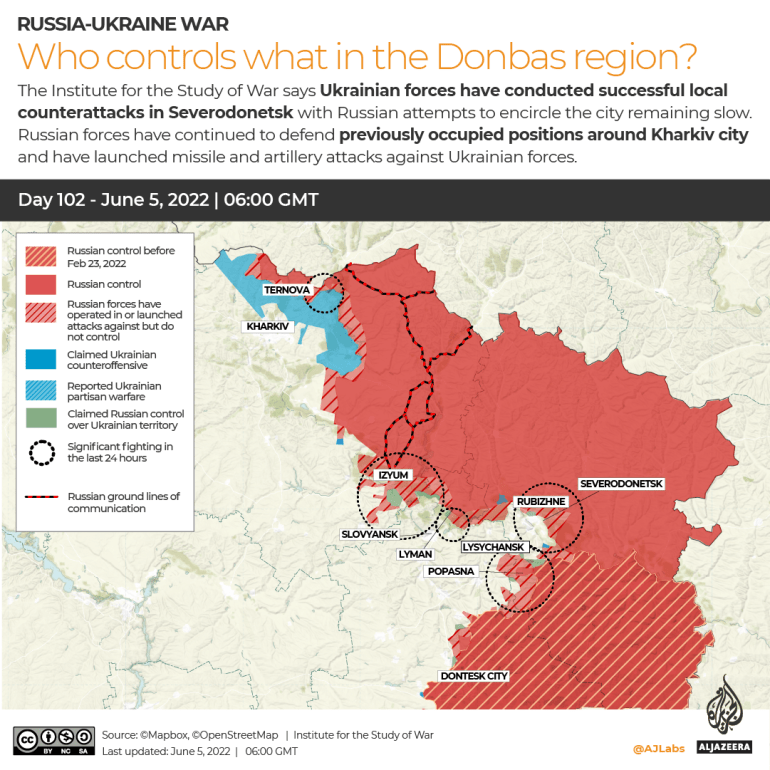 ‘Use our means of destruction’ over arms deliveries

Putin lashed out at Western arms supplies to Ukraine and said they aim to prolong the conflict.

“All this fuss about additional arms deliveries, in my opinion, has only one goal: to postpone the armed conflict as much as possible,” said the Russian leader.

He stressed that such supplies are unlikely to change the military situation for the Ukrainian government.

If Kiev gets longer-range missiles, he added, Moscow “will draw the right conclusions and use our means of destruction, which we have in abundance, to attack those objects that we have not hit yet”.

Russian forces have made a series of advances in the city before, but Ukrainian fighters have pushed back in recent days. A British intelligence letter also said the Russian military relies in part on Luhansk separatist reserve forces.

“These troops are poorly equipped and trained, and have no heavy equipment compared to regular Russian units,” it said, adding that the move “indicates a desire to limit casualties from regular Russian troops.”

Ukrainian authorities escorted journalists to the site of a Russian attack in Kiev, the first attack on the city since late April.

Officials said they invited reporters to visit the facility to dispel reports that the targeted building was being used to repair and store T-72 tanks handed over from Eastern European countries. Earlier, Russia’s defense ministry said it uses high-precision air-launched long-range missiles.

Amid the devastation, an adviser to President Zelenskyy’s office, Serhiy Leshchenko, refuted the Russian claims, saying the facility was a civilian one that produced rail vehicles.

However, officials did not speak of another nearby site that had also been hit and burned, creating plumes of smoke.

It was a painful end to Ukraine’s mission to qualify for Qatar while remaining under invasion from Russia.

The Ukrainian players seemed heartbroken after the defeat and wanted to make their country feel positive after it endured three months of bombing.

Ukraine coach Oleksandr Petrakov said he was unable to utter a word of criticism of his players.

“I think we did everything we could, but I want the people of Ukraine to remember our team and our efforts. I’m sorry we didn’t score. But that’s sport, it happens.”

Read here for all updates on June 5th