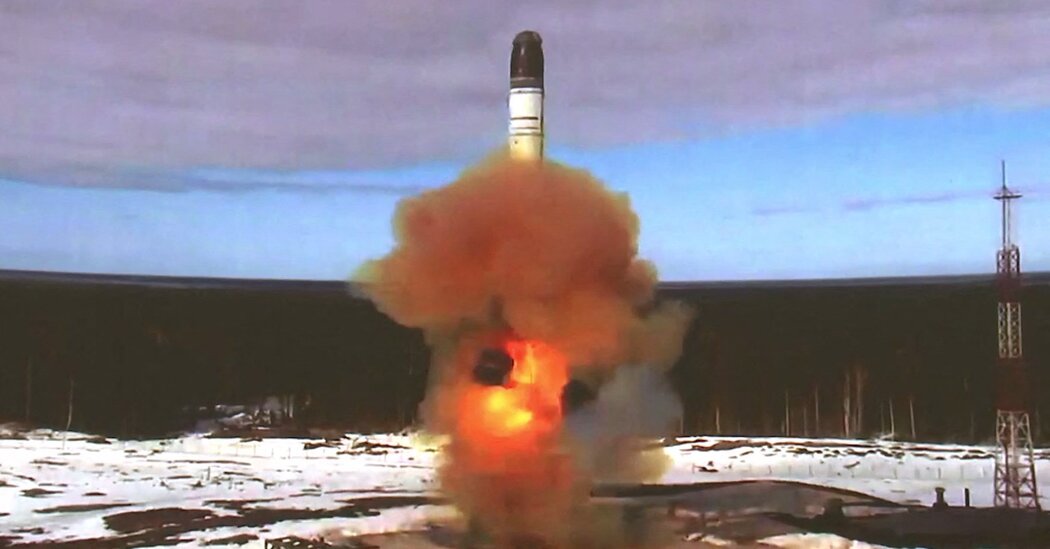 Russia announced on Wednesday that it had successfully launched a new missile that it said could deploy nuclear warheads at hypersonic speeds anywhere in the world and outsmart defenses, a move President Vladimir V. Putin said was intended to Showing Russian opponents that they had to “think twice” before he threatened his country.

But even if the test was successful, the new rocket doesn’t seem ready for use yet. The Russian defense ministry said on Wednesday that the test launch of the Sarmat intercontinental ballistic missile was the first and that it would not enter Russia’s arsenal “after the completion of the test program”. There was no immediate comment from US officials about the launch.

Mr Putin first announced that Russia had developed the Sarmat in 2018, but his decision to test it on Wednesday seemed intended to send a clear signal in the midst of the war in Ukraine. Analysts have speculated that Mr Putin could increase the threat of the use of nuclear weapons to try to dissuade Western countries from supporting Ukraine and forcing Ukraine to surrender.

“This truly unique weapon will force anyone who tries to threaten our country in the heat of frenzied, aggressive rhetoric to think twice,” Putin said in short televised comments on Wednesday.

The Department of Defense has released footage showing a white missile emerging from an underground silo on a snowy launch site in a fireball and then shooting into the sky. The launch took place at the Plesetsk Cosmodrome in northwestern Russia, the ministry said, hitting a target on the Kamchatka Peninsula 5,500 miles to the east.

Putin was shown to oversee the launch via video conference in the Kremlin and received a report from Defense Minister Sergei K. Shoigu. Mr Putin said in his brief remarks that the Sarmat consisted only of Russian-made parts, an apparent attempt to demonstrate that the Russian defense industry was not deterred by Western economic sanctions.