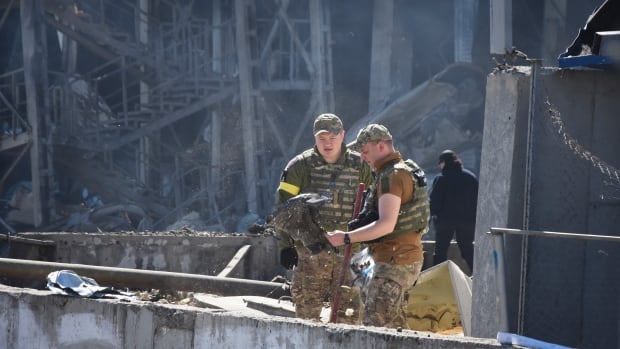 Updates from the ground on Day 76 of the war

Russia attacks with ‘the dagger’

The Ukrainian army said Russian forces fired seven rockets from the air at Odessa and hit a shopping center and warehouse. One person was killed and five were injured, the army said.

The Center for Defense Strategies, a Ukrainian war-monitoring think tank, said that during the attack, a Russian supersonic bomber fired three hypersonic missiles. It identified the weapons used as Kinzhal, or “Dagger”, hypersonic air-to-surface missiles.

The Kinzhal can fly five times the speed of sound and has a range of 2,000 kilometers. By using advanced guided missiles, Russia can fire remotely from aircraft without being in Ukrainian airspace and exposed to possible anti-aircraft fire.

Meanwhile, Ukrainian, British and US officials are warning that Russia is quickly depleting its stock of precision weapons and may not be able to build more any time soon. That increases the risk of more inaccurate missiles being used as the conflict continues, potentially resulting in more civilian deaths and other collateral damage.

44 found buried in the rubble

Ukrainian officials announced on Tuesday that the bodies of 44 civilians had been found in the rubble of a five-story building in the northeast, which was destroyed in an attack weeks ago.

“This is another terrible war crime by the Russian occupiers against the civilian population!” Oleh Synehubov, the head of Kharkiv’s regional administration, said in a social media post announcing the deaths.

The building collapsed in March in Izyum in the Kharkiv region. The area has been under constant attack from Russia since the start of the war in late February.

According to the latest update from the Office of the United Nations High Commissioner for Human Rights, 3,381 civilians have been killed and 3,680 injured in Ukraine since the invasion began at 4 a.m. on Feb. 24.

But the head of the UN’s rights surveillance mission said the death toll is expected to be significantly higher than official data shows.

The European chief of the World Health Organization has also released sobering figures, estimating that at least 3,000 people have died in the country as a result of lack of access to treatments for chronic diseases.

So far, the Global Health Service has documented some 200 attacks in Ukraine on healthcare facilities, and few hospitals are currently in operation.

In a speech, Hans Kluge, WHO’s regional director for Europe, said that “40 percent of households have at least one member who needs chronic treatment they can no longer find, resulting in an estimated at least 3,000 premature preventable deaths. “

Fierce Fighting Continues in the East

Heavy fighting is raging in eastern Ukraine and Ukrainian defenders are still being held at a steel factory in the southern port city of Mariupol.

One of the Ukrainian fighters who last took a stand at the steel mill said they were still defending the city.

Valeri Paditel, chief of border guards in the Donetsk region, said the fighters “did everything they could to make those who defend the city in the future proud”.

The Ukrainian army warned on Tuesday that Russia could target the country’s chemical industry. The claim was not immediately explained in the report, but Russian shelling had previously been aimed at oil depots and other industrial sites during the war.

Grinding war is a slog from village to village

Satellite photos on Monday showed intense fires in Russia-occupied territory in southern Ukraine. The cause of the fires was not immediately clear. However, images from Planet Labs showed thick smoke rising east of Vasylivka, a town flanked by nature reserves.

After unexpected fierce resistance forced the Kremlin to give up its attempt to storm Kiev a month ago, Moscow’s forces have concentrated on capturing the Donbas, Ukraine’s eastern industrial region.

But the fighting there has gone back and forth, village by village. Some analysts suggested Putin would declare the struggle a war and not just a “special military operation,” and order a nationwide mobilization and call on reserves to fight a protracted conflict.

Russian President Vladimir Putin used his country’s holiday to commemorate the Soviet Union’s victory over Nazi Germany to justify the invasion of Ukraine. 2:29