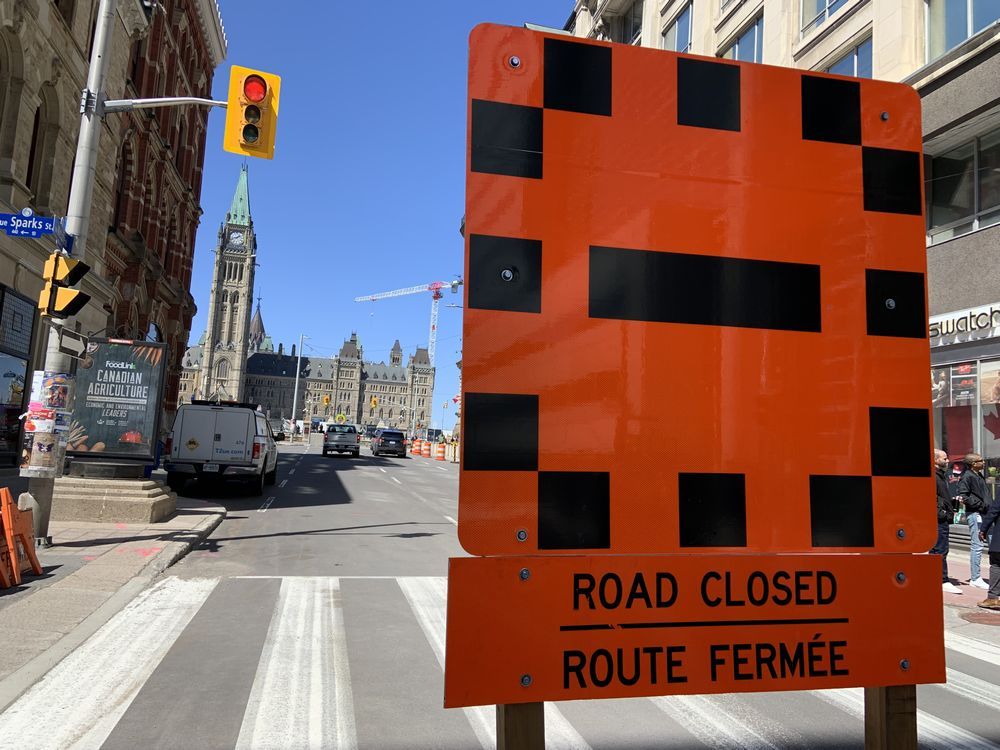 Another group of people planning to gather in Ottawa on Saturday say they will line several city streets to join hands, wave flags and form a “unitary chain.”

Posts on The Ottawa Unity Chain’s Facebook page explain that the organization is independent from “Rolling Thunder,” but that the two groups have talked about how they can help each other. Some of the chain’s participants are expected to head to the Parliament Hill rally on Saturday afternoon, which is being promoted on the Unity Chain page.

People from several towns outside of Ottawa have formed “convoys” to come to Ottawa for the chain, but it’s unclear how big the event will be.

The goal, according to the Facebook page, is to “spread as much peace love and patriotism as possible among fellow Canadians”.

In Ottawa, the group has identified streets in 15 zones. They’ve asked people to go to a designated street at noon, wave flags, and join hands and sing O Canada at 1:00 PM. At 1:15 PM there is a moment of silence for “world peace”.

One of the routes starts at Bronson and Gladstone Avenues, goes through Gladstone to Kent, then north to Wellington Avenue and east to Portage Bridge. It bisects the downtown zone that police have determined excludes vehicles related to protests. However, foot traffic is allowed.

Organizers have urged participants to find legal street parking near their route.

They advise people to bring noisemakers and Canadian flags, but no alcohol or “Fu** Trudeau” signs, and hate speech, behavior, signs or flags are not welcome.

The Ottawa Police Department says officers are present throughout the downtown area and are “monitoring the movement downtown.”

However, the police still allow vehicles with valid business purposes to enter the exclusion zone outside Parliament Hill.

“Today is a normal working day, so you can expect vehicles and trucks doing business within the vehicular exclusion zone,” the police said in a statement.

In the meantime, The Good Companionswhich supports seniors and adults with physical disabilities, said it would close personal programming Friday due to the expected arrival of the motorcycle convoy.

All virtual programs would continue.

Also, a group that livestreamed from a shed during the “Freedom Convoy” protest earlier this year will return to the city for the motorcycle protest this weekend.

Live from the Shed, which promotes and publishes ‘Rolling Thunder’ events, said it will livestream from the St. Laurent Shopping Center from its eponymous shed on Saturday.

Friday kicked off a downtown vehicle exclusion zone as the capital prepared for hundreds of motorcycles and riders to arrive for the weekend’s Rolling Thunder Ottawa event.

The city’s municipal department said it was ready to begin buying tickets and towing tickets to new non-stop places at 7 a.m. Friday — and later warned that setting off fireworks is not allowed. City officials were spotted putting up new no-parking signs on Thursday.

The vehicle exclusion zone, which went into effect Thursday evening, aims to “maintain business continuity and facilitate traffic flow, while above all ensuring public safety and security,” the city hall said.

Motor vehicles participating in a demonstration, event, protest or rally are not allowed in the area with barricades, heavy equipment or police officers and their vehicles at access points to “filter lawful traffic on those streets”.

“The roads are not closed – normal traffic circulation is allowed,” the city hall said, adding other vehicles, pedestrians and bicycles and getting through.

There is no street parking or stopping in the purple zone (see map), but it is allowed in the yellow area for vehicles that are not part of a demonstration, event, rally or protest, such as those of people on the road to companies in the area or who live there.

Zone parking is available on lots and garages within the yellow zone — but plan ahead, they can be busy, the city said.

“Public transport is an excellent choice for traveling from April 29 to May 1 to and from the core.”

Community Solidarity Ottawa will hold an “Unwelcoming Party” Friday to greet what they dubbed “Convoy 2.0.” Organized by the coalition of community groups, residents and unions, the event will take place at Strathcona Park in Sandy Hill from 5:00 PM to 7:00 PM

“We chose Strathcona Park to show support and solidarity with the residents of Vanier, Overbrook and Sandy Hill who were deeply affected by the occupation in February,” CSO said.

Ottawa police said Thursday they will cruise Rolling Thunder near the National War Memorial on Saturday, but will not stop.

Acting Police Chief Steve Bell reiterated that downtown streets will be closed to vehicles part of the events from Friday to Sunday.

The vehicle exclusion zone includes the area near the National War Memorial, where a Rolling Thunder ceremony is scheduled for Saturday morning.

However, Bell also described an approved route that dives into the exclusion zone and passes by the war memorial.

The motorcycle route starts in the Conroy Road area – organizers have said they plan to converge at the St. Laurent shopping center – goes over Montreal Road, Rideau Street and Waller Street before crossing the Mackenzie King Bridge, to the south on Elgin Street, east on Laurier Avenue West, through Nicholas Street and onto Highway 417.

Bell said on Wednesday that police would prefer an approved route rather than the cyclists driving around disorganized.

Both Bell and Mayor Jim Watson have assured residents they will not allow a repeat of the “Freedom Convoy” protest, which occupied downtown streets for three weeks this winter.

Additional officers — including up to 800 from the RCMP — have been recruited along with the OPP and other municipal police forces, and there will be no tolerance for illegal activities, hate speech and traffic or ordinance violations, officials warned.

According to “Rolling Thunder Ottawa” organizers, Friday’s events will include a march and rally on Parliament Hill starting at 6 p.m.

Saturday’s events include a ceremony at the National War Memorial, motorcyclists gathering at the St. Laurent Shopping Center for a tour of the city, and a rally on Parliament Hill with “special guest” Chris Sky. The prominent anti-mask and mandate protester has been arrested multiple times across Canada and criticized by the Canadian Anti-Hate Network for anti-Semitic, racist, Islamophobic and homophobic statements.

The main organizer of Rolling Thunder distanced himself from the rally with Sky.

On Sundays there is a service in the “motor church” in Vanier.

with files from Jacquie Miller