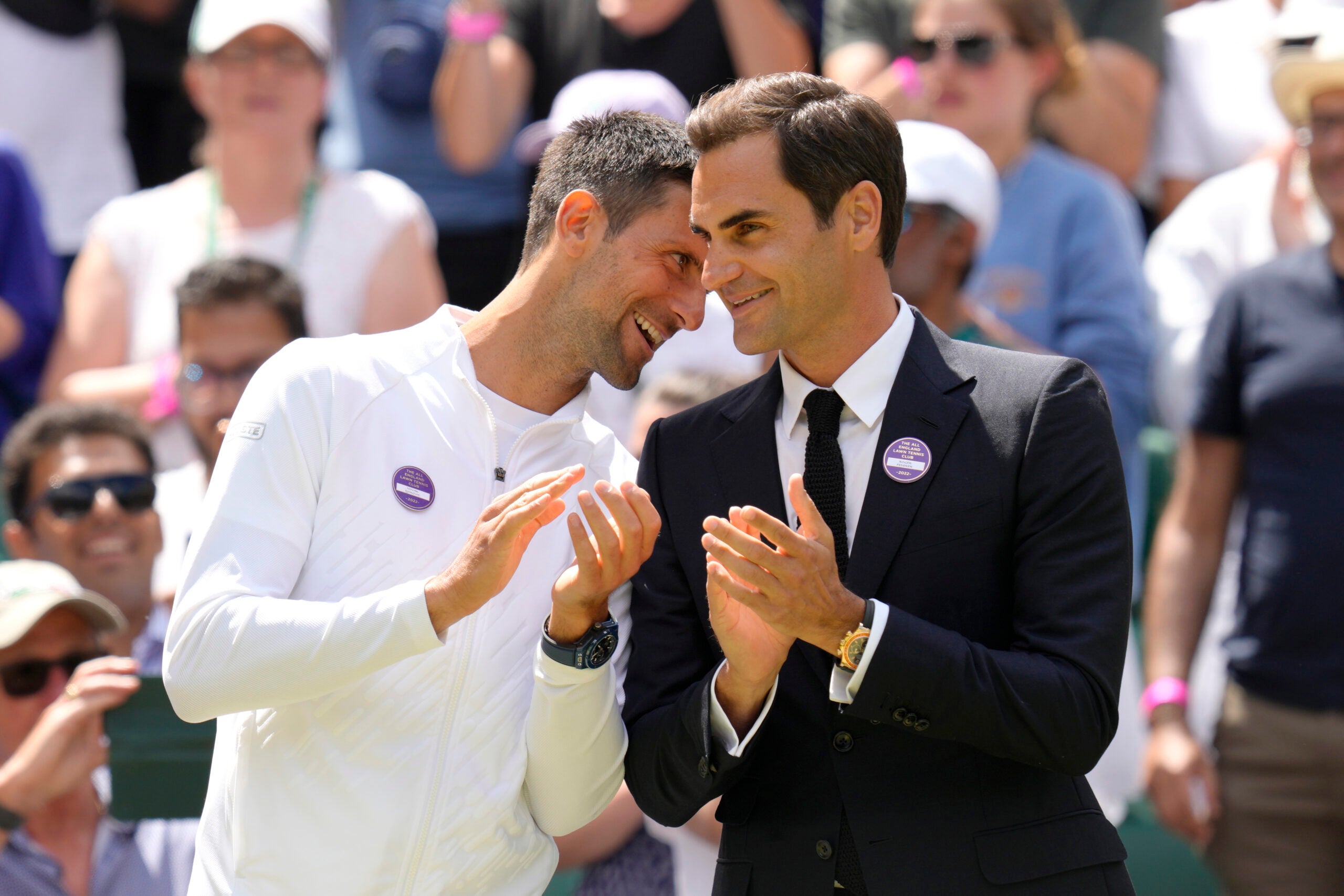 WIMBLEDON, England (AP) – Roger Federer has come to Wimbledon this year after all – not to compete, mind you, but to take part in a centenary ceremony for Center Court on Sunday – declaring his intention to trying to return in 2023 with a racket in hand.

“Tried to be successful here and represent the sport well. I hope I did,” said Federer, who won eight of his 20 men’s Grand Slam titles at the All England Club and was greeted with a standing ovation. “And I hope I can come back one more time…”

Instead of the mandatory all-white playing uniform, Federer wore a dark suit and tie, his purple Wimbledon member badge pinned to the lapel of a jacket. The Swiss star, who turns 41 on August 8 and has been sidelined for a year with knee problems, was one of more than two dozen grass-court singles championship winners to appear in the main stadium during a 35-minute tribute to a stadium. which opened in 1922.

“I’ve been lucky enough to play a lot of games on this field. It feels uncomfortable to be here in a different kind of role today,” said Federer, who had competed in every Wimbledon since his main draw in 1999. “But it’s great to be here with… all the other champions. This court has given me my greatest victories, my greatest losses.”

With eight singles to his name, @rogerfederer #Wimbledon † #CentreCourt100 pic.twitter.com/ucGLn0wW6q

His last game anywhere was on July 7, 2021, when he lost to Hubert Hurkacz in the quarterfinals at Center Court 6-3, 7-6(4), 6-0. Shortly after, Federer had surgery to repair damage to his meniscus and cartilage in his right knee — his third surgery on that knee in a span of 1 1/2 years.

Federer has said he plans to return to tournaments at the Swiss Indoors in October.

“Of course I missed being here. I would have loved to be here. I knew I walked out of here last year, it was going to be a tough year. Maybe I didn’t think it would take me this long to come back. But the knee has been hard on me,” he told the crowd. “I didn’t know if I would make the trip, but I’m glad I’m here and now.”

The whole scene was in some ways an infomercial for the Grand Slam event itself.

There were gauzy videos—three in all—jokes by co-hosts Sue Barker and John McEnroe, appearances by Cliff Richard, who used to help pass the time by singing during rain delays (a thing of the past, now Center Court and No. 1 Court are equipped with retractable roofs), and Freya Ridings, who sang the 2017 ballad “Lost Without You” while accompanying herself on a white piano set on the grass near some front row seats.

Previous champions have included some champions this year, such as Novak Djokovic, Rafael Nadal and Simona Halep in singles and Venus Williams in mixed doubles.

When it was his turn to take the microphone, Djokovic joked: “Gosh, I feel more nervous than when I play.”

The six-time winner would later appear on Center Court in the fourth round, which was unusual in itself: this marks the first time in history that the tournament has been scheduled as a 14-day event, with games scheduled for the middle Sunday. Previously, that was set aside as a day off, and only on four occasions – in 1991, 1997, 2004 and 2016 – were the organizers trailed by too much rain to add matches on that Sunday.

Andy Murray, whose 2013 Wimbledon singles trophy was the first for a British man in 77 years, Angelique Kerber and Petra Kvitova were other active players in attendance. And, of course, there were also big names from yesteryear: Billie Jean King, Rod Laver, Chris Evert, Bjorn Borg – he and McEnroe, fierce rivals in the 1980s, hugged each other – Stefan Edberg and Goran Ivanisevic.

Also listed by the club as attending: the son of Leslie Godfree, who delivered the first serve in the opening match at Center Court in 1922, and the grandson of Algernon Kingscote, Godfree’s opponent that day.

Absent were three of the winning players in the tournament’s history: Martina Navratilova (who tested positive for COVID-19 and wrote on Twitter that she was “disappointed” to miss the opportunity), Serena Williams and Pete Sampras. Navratilova’s nine singles championships are a record at Wimbledon; Williams, who lost in the first round last week, and Sampras, who retired in 2002, each won seven times.