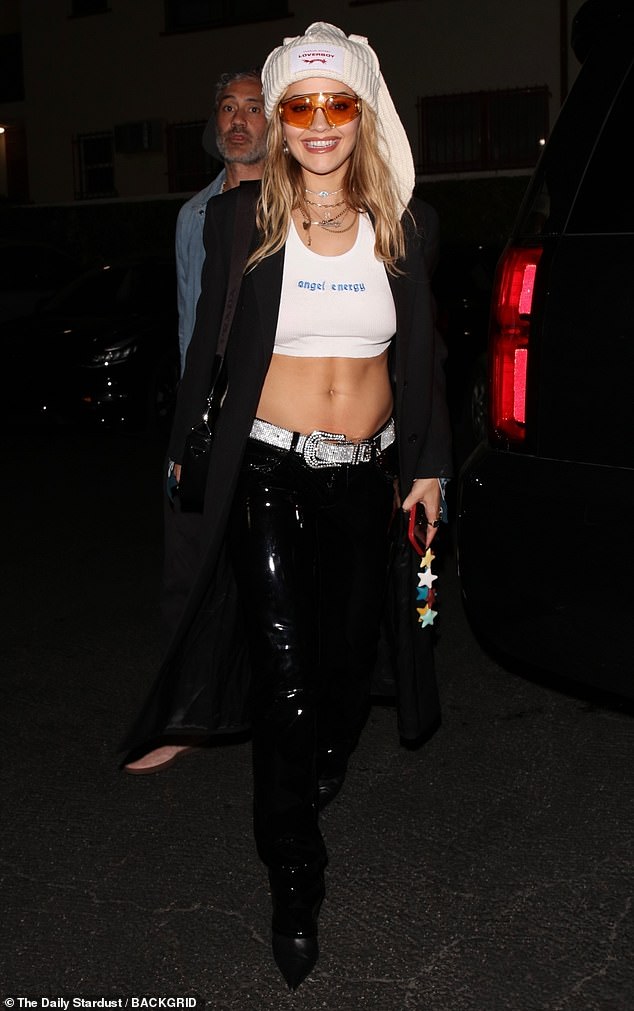 By Owen Tonks For Mailonline

Rita Ora showed off her taut abs as she stepped out with boyfriend Taika Waititi to Mike Dean and Jeff Bhasker’s pre Grammy party at OffSunset in Los Angeles on Friday.

She opted for a pair of black PVC trousers and added a touch of sparkle to her look by donning a chunky silver belt with a bejeweled buckle.

Fighting fit: Rita Ora, 31, showed off her taut abs in a crop top as she stepped out with boyfriend Taika Waititi, 46, on a date night to a pre Grammy Awards party on Friday

Rita wore a black jacket and accessorised with a white hat and some orange-hued sunglasses for her outing.

The pop star walked just ahead of her filmmaker partner Taika, 46, who went for a casual look for the night.

He wore a light blue denim jacket over a gray hoodie and cream top, with a gold chain hanging around his neck. 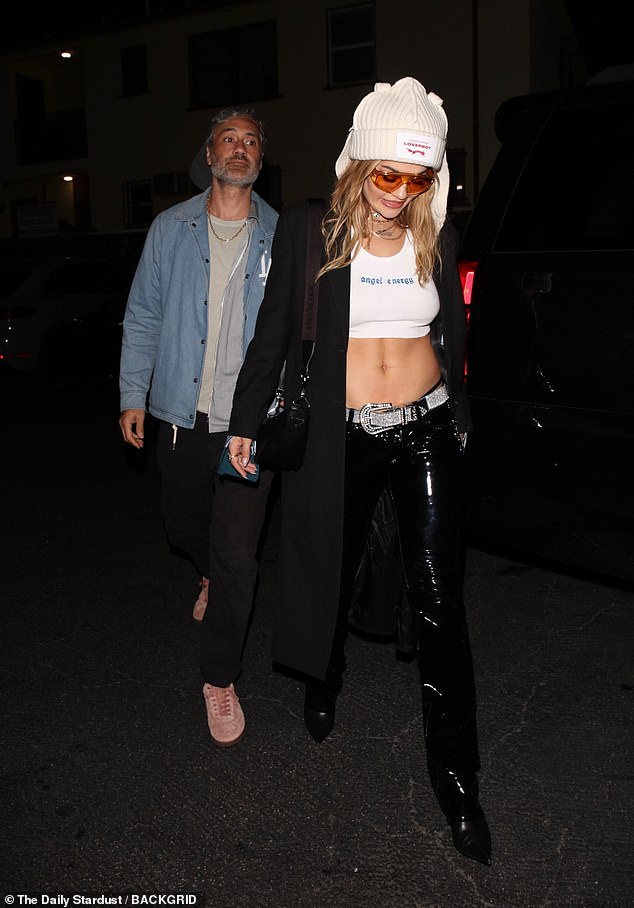 In style: The singer wore the top by domestic violence awareness based clothing line Angel Energy, leaving her impressively toned stomach on show

Taika wore a pair of black trousers and had on some comfortable salmon pink trainers.

Rita met her boyfriend in Sydney in February last year and a source told The Sun the couple started ‘secretly’ dating in early March that same year.

‘All their friends know about the relationship – they’re really into each other,’ the insider said at the time. 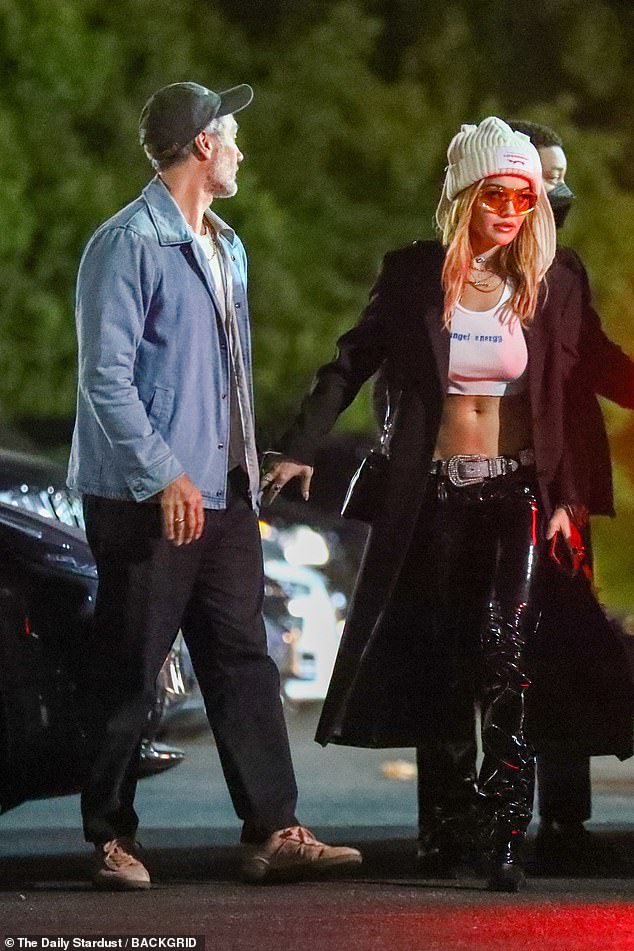 Fashion focus: She opted for a pair of black PVC trousers and added a touch of sparkle to her look by donning a chunky silver belt with a bejeweled buckle as she walked with Taika

Meanwhile, Rita has been spending time in the recording studio during the production process of her upcoming third full-length album.

She confirmed she was working on a third album during a 2019 interview with Marie Claire.

The performer previously released her debut record, entitled Ora, in 2012, and it was met with generally positive reviews. 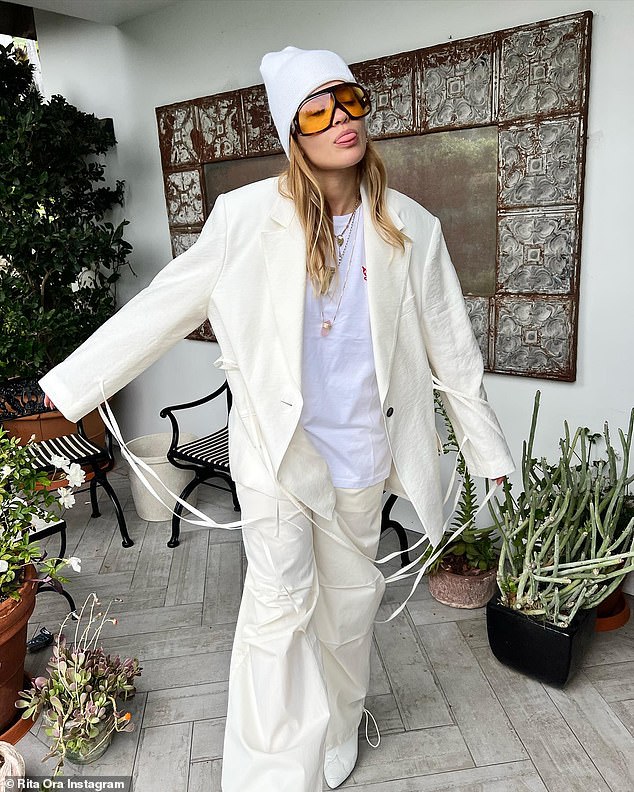 Dressed to impress: It comes after Rita shared a stylish set of six snaps to her Instagram account on Thursday

Her second full-length album, Phoenix, was made available to her fans in 2018, and it also received a warm critical reception.

During her interview with the media outlet, Ora expressed that her new record would see her ‘being content and able to do what I want, which is really cool’.

Last month, the singer announced that she had signed a record deal with BMG that allowed her to keep her own masters. 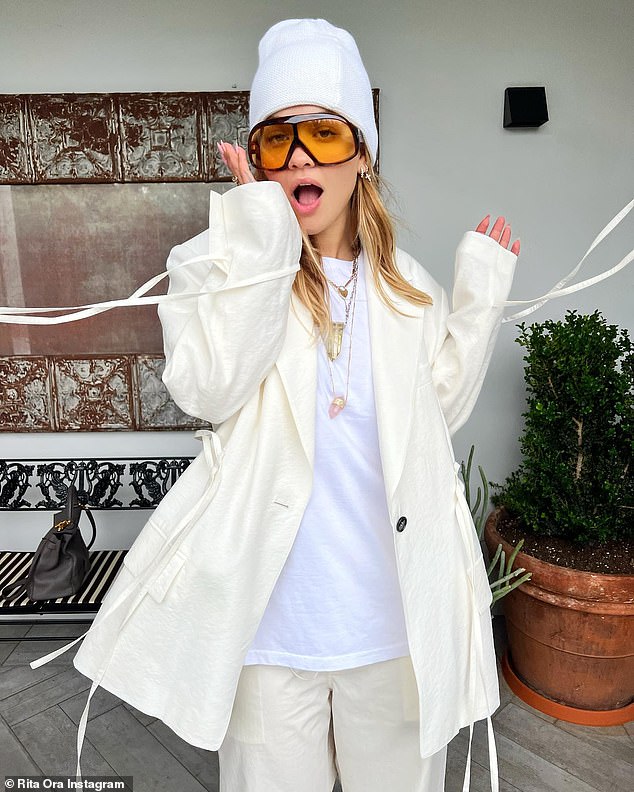 Keeping it consistent: She wore a nearly all-white outfit that included a loose-fitting t-shirt and a sizeable jacket during the impromptu photoshoot.

The performer also wrote a lengthy message in the caption of an Instagram post where she called the decision to retain the masters ’empowering.’

She also added a note to the bottom of her statement where she noted that she was enthusiastic about the prospect of sharing new tracks with her fans.

‘I am beyond excited about the new music I’ve been working on and can’t wait to share it with you all,’ she said. 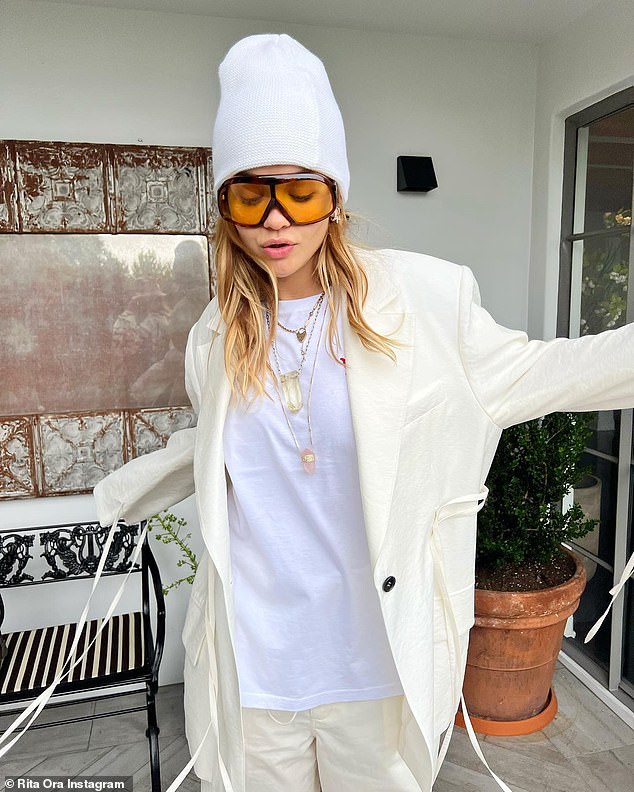 Crafting her look: The snaps were taken as she spent time in the recording studio during the production process of her upcoming third full-length album