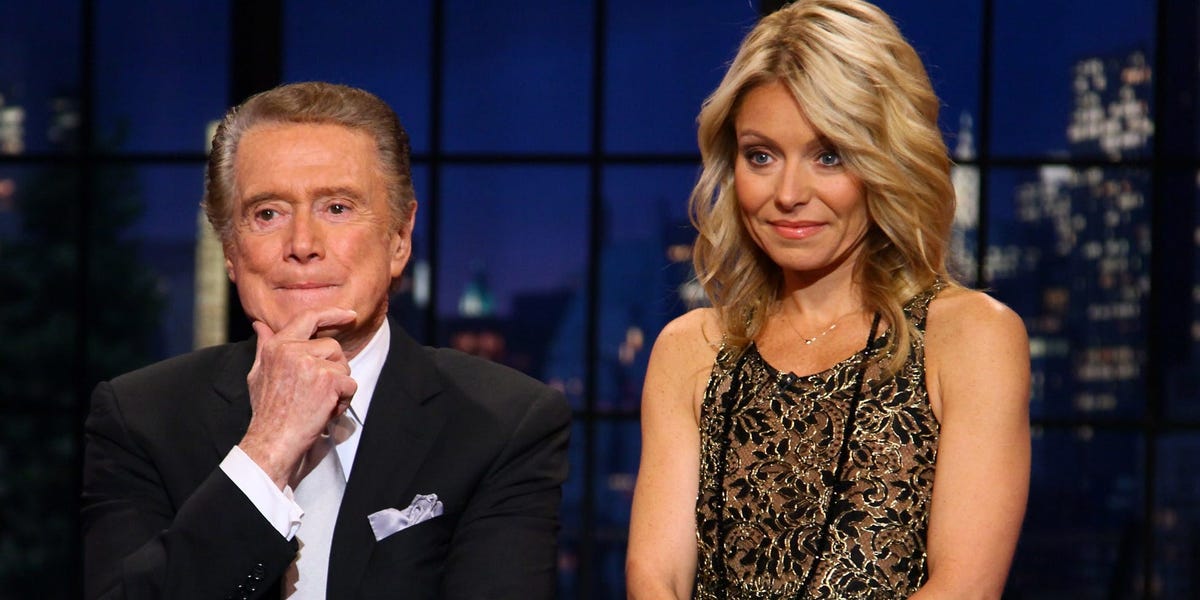 Kelly Ripa talked about the behind-the-scenes details that led to her joining “Live!” in 2001 as a co-host of Regis Philbin.

Ripa, known for her role as Hayley Vaughan on the soap opera “All My Children”, was a guest co-host before landing a full-time job on the talk show. After Kathie Lee Gifford’s departure in July 2000, a search for a replacement cohost began.

In her book titled “Live Wire: Long-Winded Short Stories,” released Tuesday, Ripa said she noticed “a shift in mood” when she returned to the “Live!” cohost for the third time. The actress said she was given “a list of memories” before appearing.

“My agent said they didn’t want me to bring any entourage to the studio,” wrote Ripa, who was pregnant with her second child at the time. “He said there had been complaints. This confused me as I had only brought Richard and Doreen, my hair and makeup team.”

“I would definitely never be invited to co-host again,” she said. “I wondered what I had done to bring about this drastic change because like all women do, I blamed myself.”

Ripa said Angela Shapiro, then-president of ABC Daytime, later told her that the network wanted to make her an official offer to become the new permanent cohost.

Ripa wrote in her book that there was a gap between the network (ABC) and the show’s local partner (WABC). The Emmy-winning host said she told Shapiro she wasn’t thinking about the people at “Live!” including Philbin, liked her.

Ripa said the job offer was accompanied by a warning: “They want to make sure you know who your boss is.”

Ripa recalled discussing the offer with her husband Mark Consuelos, who told her the job would bring “better working hours and more money.” Ripa said she was notified over the phone with her agent about a laundry list of “deal breakers.”

“The list would have been comical to anyone in the entertainment industry if they had listened,” Ripa wrote. “I thought they were insignificant, for want of a more precise description.”

“Usually the breaking point of any negotiation comes down to money, no matter what this did, but the executives of ‘Live!’ were also willing to blow the deal on much smaller issues. I’m talking about the most basic of basics,” she explained.

“I wasn’t allowed to use my own hair and makeup people,” Ripa said.

“I can’t say enough how standard it is to have a dedicated makeup and hair team at every show, let alone one that bears the ‘talent’ name,” she continued. “But this was the biggest deal breaker and the most profound flashpoint of my entire contract.”

According to Ripa, her small team was also not allowed to do her hair and makeup on the ‘All My Children’ set prior to the filming of the talk show ‘even if I paid for them myself’.

“I was ordered, yes ordered, to use the Regis hair and makeup team,” she said. I pushed back that it made no sense for me to go to the second studio, wash my face and hair, and have everything redone for the soap. They insisted it was a deal breaker like ‘Live!’ had a very specific appearance. We laughed at the absurdity of the thought of what that look might be.”

Ripa added that much to her relief, the show’s makeup artist and hairstylist turned out to be “talented” and “hospitable.” But there were other points of contention in the offer.

Ripa said “there would be no cloakroom service or budget,” which, she said, “never happens in a show.” Plus, there would be no paid maternity leave and she wouldn’t be allowed to have an office (“I just had to have my own cubicle”).

Additionally, Ripa said her name should be “smaller than Regis’ name on the ‘Live!’ title card and branding. A game of inches, that goes without saying. But we agreed on that.”

Ripa accepted the job offer and the show was renamed “Live! With Regis and Kelly.”

She and Philbin worked together until he retired. After his last show aired on November 18, 2011, Ripa became the head of the show. Several celebrities stepped in as guest cohosts until former NFL player Michael Strahan was selected as the new permanent cohost in 2012.

He left the show four years later and Ryan Seacrest has been Ripa’s cohost since 2017.