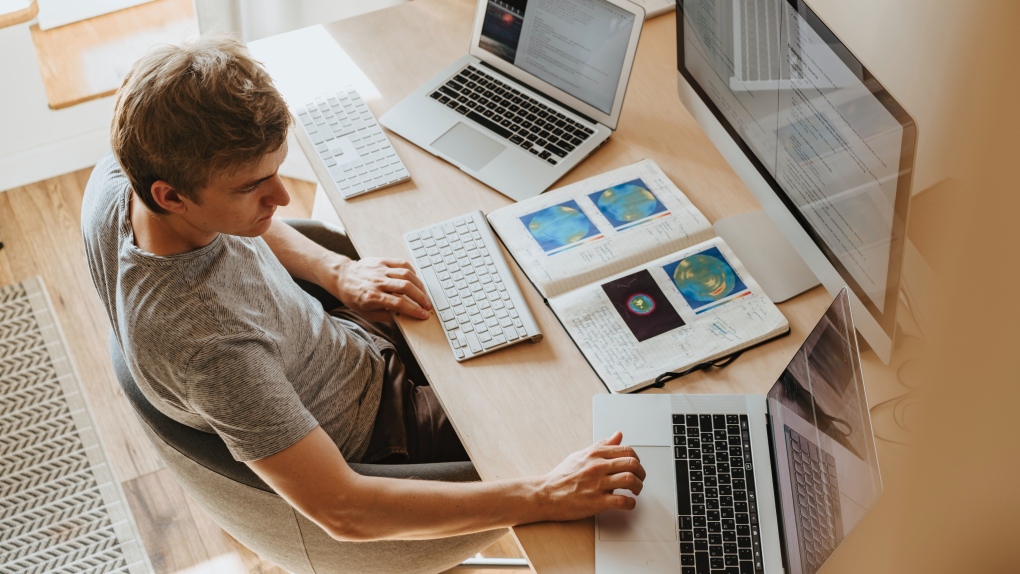 A new report finds 28 percent of Canadians have trouble disconnecting from their jobs after regular work hours, a trend experts at LifeWorks say continues to affect workers’ mental health.

According to LifeWorks’ monthly Mental Health Index released Thursday, Canadians unable to disconnect from their jobs after the workday showed a mental health score nearly nine points below the national average.

The index found that respondents under 40 were 70 percent more likely to be unable to disconnect after normal work hours than respondents over 50.

LifeWorks President and CEO Stephen Liptrap said the findings come as many Canadian organizations continue to operate with remote or hybrid models due to the COVID-19 pandemic.

“Employers are beginning to realize that the effects of a pandemic disruption on mental health will be with us for some time to come. Because the workplace now overlaps with home, the benefits of flexibility can easily be counteracted by a lack of separation from work,” said Liptrap in a press release.

According to the report, 51 percent of Canadians said they were unable to disconnect from work because they had too much work to complete during the workday, 25 percent said their manager contacts them after work, while 23 percent said their colleagues contact them outside office hours for work-related issues.

In addition, LifeWorks found that many Canadian employees are currently experiencing burnout, which leads to a lack of concentration and motivation at work.

The Mental Health Index reports that more than two in five Canadians said they end their workday feeling mentally and/or physically exhausted. LifeWorks says this group was found to have a mental health score that was 13 points below the national average.

LifeWorks uses an answer scoring system that converts individual answers to each survey question into a point value. According to the report, higher point values ​​are associated with better mental health.

The scores of the respondents are added up and then divided by a total number of possible points to obtain a score out of 100. To demonstrate change, the current month’s scores are compared to the benchmark and the previous month.

According to the index, 27 percent of Canadians surveyed said they find it “increasingly difficult” to focus on work because of burnout, while 35 percent reported a lack of motivation due to feelings of exhaustion.

“Motivation declines with burnout, not because people don’t value their work anymore, but because they lack the energy to fully commit,” Allen said in the release.

Allen noted that increased cynicism and conflict are also increasingly common in workplaces due to burnout, posing “significant risk” to an organization’s culture and overall company productivity.

“The solutions must address burnout itself with appropriate services and require employers to understand the conditions that trigger burnout for their employees,” she said.

LifeWorks’ overall Mental Health Index for March 2022 fell -10.5 points, which is virtually unchanged from the previous month and nearly an 11 point drop from the pre-2020 benchmark.

According to the report, mental health scores improved in Alberta, Ontario and Newfoundland and Labrador in March 2022, while British Columbia, Saskatchewan, Manitoba, Quebec and the Maritimes fell.

The report found that the lowest subscores in March 2022 were the risk of depression (-12.2) and optimism (-11.7), closely followed by anxiety (-11.4), while financial risk was the best subscore. and the only one. those measured above the historical benchmark (4.0).

With an increase of 1.3 points, the subscore for general psychological health according to the index is the biggest improvement from February 2022.

LifeWorks’ latest monthly index is based on an online English and French survey of 3,000 responses collected between March 3 and 20, 2022. All respondents live in Canada and are currently employed or have been employed within the past six months, according to the index. Benchmark data was collected in 2017, 2018 and 2019.

The HR firm, formerly known as Morneau Shepell, says participants are selected to be representative of age, gender, industry and geographic distribution in Canada. Each month, the same respondents participate to remove a sampling bias. Respondents are asked to take into account the preceding two weeks when answering each question.

LifeWorks added that online surveys can’t get a margin of error because they don’t randomly sample the population.