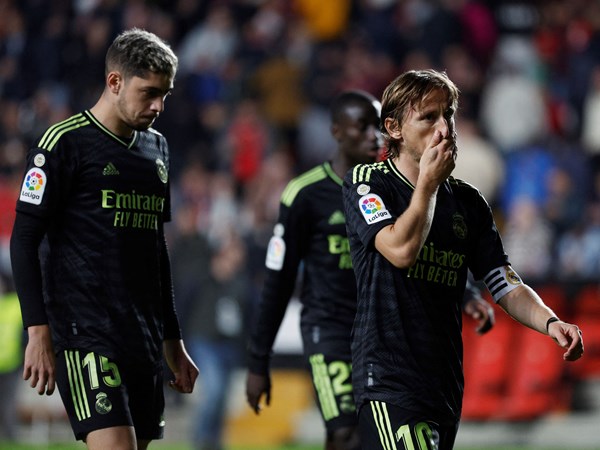 Madrid (dpa)
Real Madrid missed the chance to retake the top of the Spanish football league after losing 2-3 in the 13th leg of the competition to host Vallecano, 21 points in eighth place.

Vallecano advanced with a goal scored by Santi Comsania in the fifth minute, before Luka Modric equalized for Real Madrid from a penalty in the 37th minute and in the 41st minute Eder Militao scored the second goal for Real, but Vallecano equalized again via Alvaro Garcia in the 44th minute and in the 67th minute Oscar Trejo scored the third goal for Vallecano from a penalty kick.
The match started under pressure from the host team, who tried to confuse his opponent’s accounts, who exchanged pressure on his host with a fiery attack consisting of Brazilian Vinicius Junior and his compatriot Rodrygo, alongside Uruguayan Federico Valverde.
Vallecano advanced in the fifth minute via Santi Comsania, who received a cross from the left of his colleague Francesco Garcia, to hit the ball directly past Belgian goalkeeper Thibaut Courtois.
After the goal, Real Madrid went out to score the equalizing goal, creating spaces in the defensive line, which Vallecano used to launch several attacks on the Real Madrid goal.
And in the 37th minute, the referee awarded Real Madrid a penalty after blocking Marco Asensio in the penalty area, who was translated into the net by Croatian captain Luka Modric and scored the equalizing goal.
Real Madrid scored the second goal via Eder Militao, who headed from a corner from his colleague Asensio in the 41st minute past goalkeeper Stoli Dimitrievsky, who touched a strong ball Courtois failed to stop and his net.
The rest of the first half minute was nothing new, so the referee whistled until the end with a 2/2 draw. Starting the second half, Rayo Vallecano continued his good performance, threatening Courtois’ goal on more than one occasion, as Real Madrid appeared to be surrounded by the club’s strong attack.
In the 67th minute, the referee awarded Rayo Vallecano a penalty after a handball from Real defender Dani Carvajal into the penalty area.
Rayo Vallecano player Oscar Trejo took the penalty, but Courtois successfully saved the kick before the referee decided to retake the kick due to a foul by Real Madrid players during its execution.
On the second time, Trejo scored Rayo Vallecano’s third goal, so the host team managed to boost the result again, and Real Madrid’s attempts to get back into the game varied, but Rayo Vallecano’s defense was more then matched.