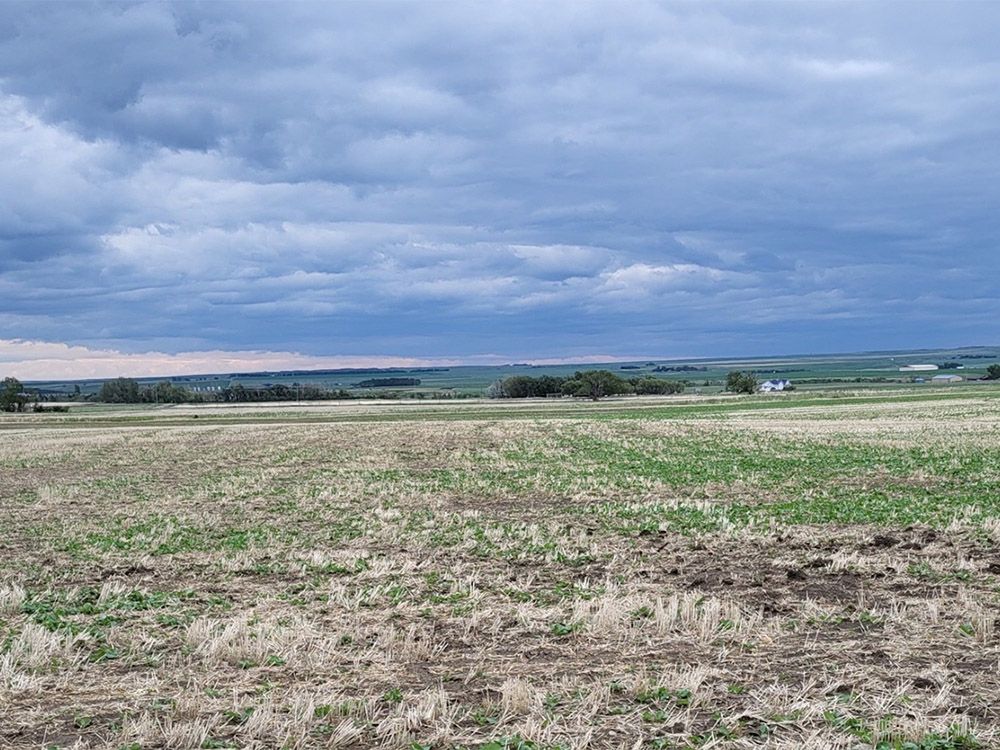 For Sean Stanford, there was no better way to wake up than to the sound of torrential rain on his farm near Magrath.

It was early Monday morning, but the sound of the summer’s first real rain was music to his ears.

“I just woke up in the morning or in the middle of the night and I heard raindrops banging on my roof and it was just an instant relief, almost,” said the Alberta Barley Commission board member.

Since the rain started to fall, his 263-acre farm has received about 60 millimeters of rainfall in the past 72 hours – about 25 mm in total over the past two months.

After a winter with very little snowfall on the farm, the timing of this deluge could not have been better. He said his cereal crops were thin and spindly rather than big and thick, while his canola that stood on dry land was growing patchily. This was evident in fields where irrigation is on a circular path – the canola in its path looks quite good, but the dry land around it in the same field is struggling.

“We haven’t had a lot of moisture yet to even get good germination from some seeds,” he said. “So it was quite desperate times and well timed to get this rain, for sure.”

While the dry weather in the early season will affect this year’s yields, he said growers hope to save at least an average crop, which combined with high raw material prices would bring much-needed relief to the beleaguered producers who continue to be faced with high costs of fuel and other inputs. †

Since Sunday, when the rain began to fall, Calgary has had about 79mm of rain, while closer to the foothills there has been even more rainfall, ranging from 100 to 150mm.

The challenge, however, is that the further east in the province you go, the less rain has fallen. Lethbridge has received about 62mm but drops to 28mm at Medicine Hat.

Danielle Fingland, a meteorologist with Environment and Climate Change Canada, said there’s the possibility of another 10mm falling in the region if the system moves to Saskatchewan. There is also a chance of more precipitation next week, but no guarantee.

“There are some models that indicate there may be another event over southern Alberta and in that area early next week,” she said. “If they’re dry, there’s a chance they’ll get some of the much-needed rain next week.”

Fingland also said no significant flooding has been reported in the rural areas so far.

“It’s great to know that it can rain near us, it’s a breath of fresh air,” said the Alberta Beef Producers board member. “The mood of the farmers and ranchers in my area has improved a lot to see some moisture.”

His family runs about 200 cows and 100 yearlings on their farm near Bassano, half an hour west of Brooks. They have recently been able to put their herd back on the pasture and get them off the feed. They were fed more than a month longer than usual after having to put their livestock on what would have been a residual pasture in the fall due to the drought.

Still, they need a lot more wet weather to really get out of last year’s crisis.

“Last year we were in such a severe drought that our moisture levels in the soil were so depleted, it was amazing to see some of the puddles forming, and it certainly didn’t take long for them to sink into the ground,” said Hale.

The low water table also affects the available water for dugouts that are normally filled by winter runoff, causing farmers to face potential shortages this summer as the rains stop and temperatures skyrocket.

This is further impacted by a global grain shortage, which continues to drive up feed costs and profit margins are already tight.

“Financially, there will be many tough decisions to make as the summer drags on,” Hale said. “I know that before we got the rain, there were growers who sold flocks, yearlings who usually went to the grass in the summer months, went to feed a lot. And the cost of feeding them in a meadow is a lot higher than in previous years. .”