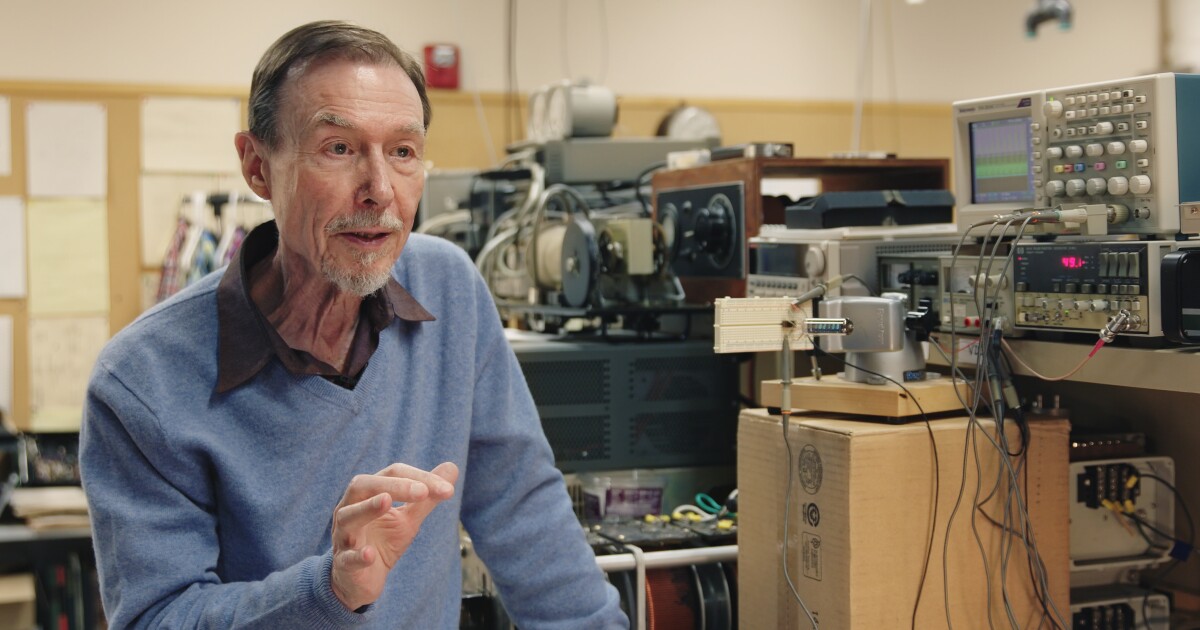 Carver Mead is unimpressed by complicated matters. As far as he’s concerned, the bigger challenge is to take a complex system and find a way to simplify it without overlooking its essential features.

In an era when integrated circuits for computers were painstakingly hand-painted by skilled lithographers, the microelectronics pioneer at Caltech designed a blueprint that would allow anyone to easily place thousands of transistors on a single microcontroller chip. His innovation from the early 1970s – called very large-scale integration or VLSI – recently earned him the prestigious Kyoto Prize for 2022.

VLSI played a vital role in the semiconductor revolution. It fueled the exponential increase in the number of transistors that could be placed on a chip, shrinking computing devices and expanding their capabilities.

After conjuring the motions of electrons around a microchip, Mead became interested in the fundamental laws of nature that govern their motion. He took it upon himself to reformulate the rules of electricity and magnetism, which are now taught as they were when proposed by James Clerk Maxwell in 1865.

Drawing on more than a century of modern physics experiments, Mead developed a more holistic view of electromagnetic phenomena. His approach is based on quantum physics, which treats electrons, photons and other building blocks of matter as well as waves and particles.

Mead called the result “collective electrodynamics” and used that term as the title of a “little green book” on the subject that he published in 2001. Now a professor emeritus at Caltech, he continues to work on this and other projects.

He spoke to The Times about his journey from computer technology to fundamental physics.

Can you describe the basic principles of collective electrodynamics?

Think of the electron as a wave, with a frequency corresponding to its energy and a wavelength related to its momentum. A superconductor contains an enormous density of electrons, coupled together to form a giant collective quantum state called the condensate. It’s like one huge electron.

Thus, the components of electromagnetism are quantum origin.

So you’re saying that physics needs a makeover?

Quantum physics was unknown in Maxwell’s day, so the quantum origin of electromagnetic interactions was not visible. Tragically, electromagnetic theory is still taught the old way.

What is the main difference between collective electrodynamics and the classical approach?

The importance of the potential. Electrical engineering, which made our modern world, is built on the idea of ​​potential. Many physicists don’t really understand the potential — they think it’s a math trick. But actually it’s a very, very deep concept.

In an electrical circuit, the electron condensate in a wire is like water flowing through a pipe. We call the current the electric current and the pressure is called the electric potential or voltage.

Does collective electrodynamics provide new insights that cannot be obtained with the standard theory of electricity and magnetism?

For the standard things you get the same answer with both. But there are things that make my approach easier to explain.

Take quantized flux for example. That describes how something flows through an area in discrete amounts. In the 1970s, scientists observed that magnetic flux around a small donut of a superconductor behaved in this way. If you have some, you get a permanent magnet. That’s what a permanent magnet is – a bunch of little superconducting loops, one in each atom. And they’re all lined up.

If you extend this to two magnets, you can just calculate what they do to each other and you get the energy beautifully. Thinking of it as a quantum system, collective electrodynamics gives you the right answer in a more straightforward way than the classical approach. And that’s a deeply fundamental thing that you can just measure.

Some found it very interesting. But when you look back on it, the book doesn’t have enough explanation, so people have a really hard time following it. Once or twice a year I get an email from someone who says, “I just grabbed what you said in your little green book and it changed my life.” And then it’s quiet for another year or two.

Do you plan to expand it further?

Yes, I’m working hard on that.

Do you think it would be beneficial to train the next generation of physicists in this new, holistic way?

We are constantly developing new things in physics. Let’s say we have a doubling of knowledge approximately every five or ten years. After a few of those it won’t be possible to train people anymore because there’s just too many new things.

So you really only have two choices. One is that you can only get narrower and narrower, learning more and more about less and less until you know all about nothing. Or you can go back and realize that the new knowledge we have opens up an incredibly deeper way of understanding the field and its conceptual relationships.

There is a widespread belief that new science leads to new innovations. Is this always true?

It is almost never true.

Most of the things that happen are not the mainstream zeitgeist at all. It’s what people get creative about and start trying, and most of it doesn’t work. Most of the things I’ve done haven’t worked, but every once in a while I get one that does. And it feels really good!

What other kinds of innovations are you working on?

I have spent a lot of time on optimally organizing information systems. The commonly programmed computer – such as your laptop or a smartphone – that we use today is very waste of its resources. It does one simple thing and it takes a lot of energy to do every simple thing.

We’re starting to develop ways that you can use transistorized silicon technology to mimic things that animal brains do. If you study the nervous system of animals, the organization is very different from a general purpose computer, and it is extremely energy efficient – our brains only need about 20 watts to work.

As a professor emeritus, I have time to think more deeply about things, pursue efforts like the green book, and wonder about things like what happens in the brain.

This interview has been edited for length and clarity.