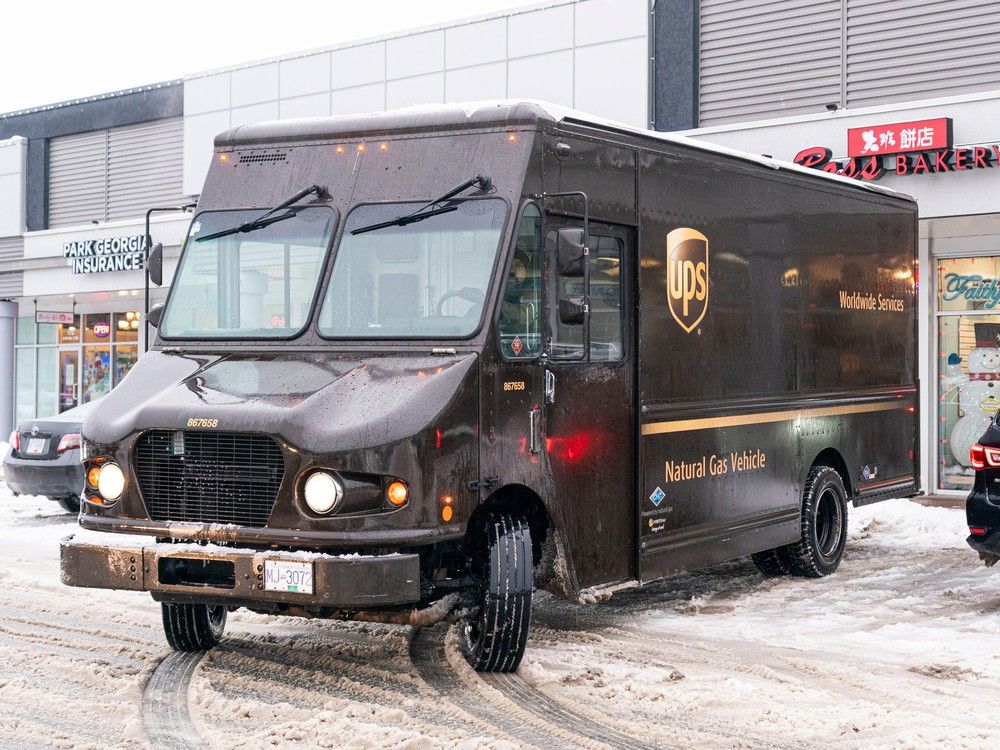 For those who parked their cars carefully due to the widespread icy and snowy roads, there were few options for getting around on the last crucial shopping and travel days before Christmas.

The BC government urged drivers to avoid non-essential travel in light of “dangerous winter conditions” predicted in a winter storm warning issued by Environment Canada.

Most of the southern coast of the province was expected to be affected by heavy snow, ice pellets, freezing rain, heavy rain on snow or ice, possible flooding and a partridge in a pear tree.

The two main bridges connecting Surrey to Vancouver and other cities were closed due to ice and snow and even TransLink, due to icing on multiple tracks causing significant disruptions on SkyTrain, said: “our strong advice to customers is not to travel at this time.”

Calling a taxi was a test of patience. A caller waited 10 minutes around noon to reach a major Vancouver taxi company only to be told the wait for a taxi was 45 to 60 minutes.

“Under the circumstances, they are doing their best because side roads are not being cleared,” said Mohan Kang, president of the BC Taxi Association. “I don’t blame anyone, but it is what it is.”

Taxi drivers must decide for themselves whether to drive during dangerous conditions and Kang said he would only guess at the percentage of usual cars available this holiday weekend. But he said drivers are motivated to drive because “like any other business, we can balance the lean months with busy times.”

“We want to hit the road and we want to serve the people.”

But drivers are being urged to strike a balance between the need to work and the safety of their passengers and themselves, Kang said.

He said waiting times are sometimes exacerbated by customers booking with a number of taxi companies and taking the first to arrive without canceling with the others.

Ride-hailers may be able to get a ride without waiting that long, but users of the apps were told on Friday that “rates are a lot higher due to increased demand.”

A caller had a car available within 10 minutes around noon on Friday, but due to high prices, the four-mile ride would have cost $43. From South Granville to the airport, the cheapest price for a small car was $67.52. For a larger vehicle with room for luggage, it would have been $104.64 at the time.

Canada Post did not promise to deliver gifts before Dec. 25, posting a red alert on Friday that affected “many regions” across Canada, meaning mail carriers would not leave or receive calls back due to “severe winter conditions”. And “most regions” were at least under yellow alert, meaning workers would deliver when it was safe to do so.

“We are closely monitoring reports of bad weather in BC,” Amazon Canada spokeswoman Ryma Boussoufa said in an email. “The health and safety of our employees, customers and the drivers who deliver parcels is our top priority. That’s why we constantly monitor the weather reports and adjust operations where necessary.”

Julie Hiscock is a delivery driver who reported that her deliveries of The Vancouver Sun, The Province and the National Post in Chilliwack were impacted by the weather.

She was able to deliver the newspapers on two of her early morning routes, to businesses and stores, but got stuck in an unploughed dead end in a residential area and had to get home.

“I have snow tires, but they are not suitable for wet snow,” she said.

More news, less ads: Our in-depth journalism is possible thanks to the support of our subscribers. For just $3.50 a week, you get unlimited ad-lite access to The Vancouver Sun, The Province, National Post and 13 other Canadian news sites. Support us by subscribing today: The Vancouver sun | The province.