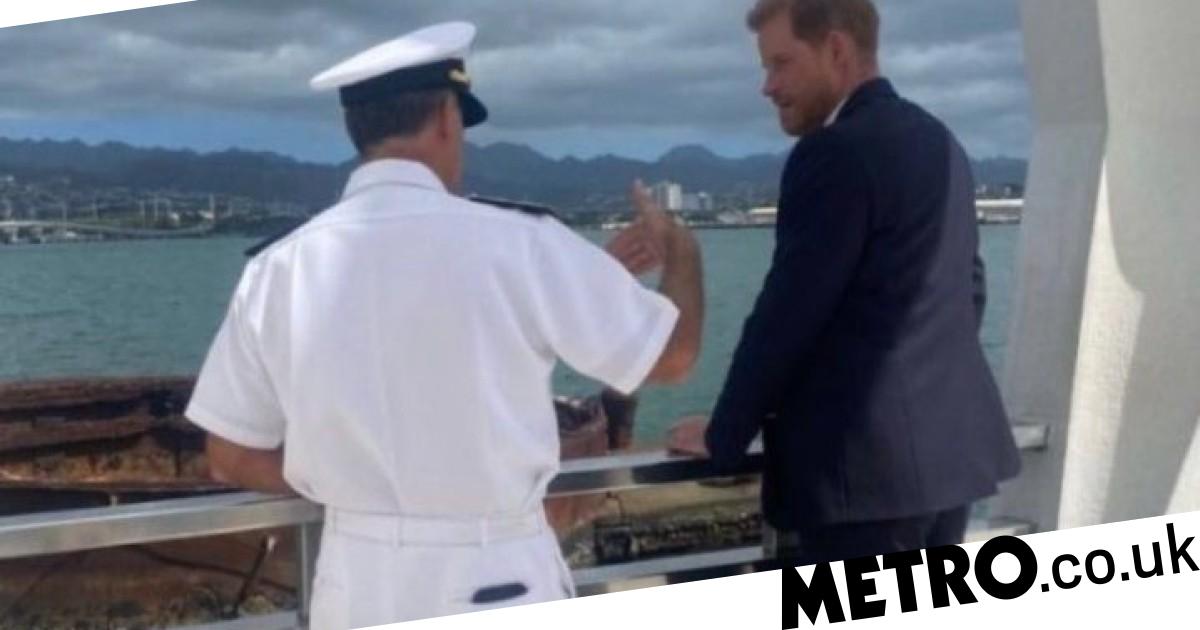 Prince Harry was pictured visiting Pearl Harbor in Hawaii on Remembrance Sunday when the royal family gathered in London.

Photos of the Duke of Sussex, 38, addressing people at the USS Arizona Memorial in Honolulu were shared online.

He had a poppy pinned to his coat, but chose not to wear his military medals.

The royal family was stripped of the right to wear military dress after his departure from the royal family, but he is still allowed to wear the medals he earned for his ten years of service in the armed forces.

Royal fans commented that ‘it looked like the Duke was there for Veterans Day’.

He appeared to be making the journey alone, leaving wife Meghan Markle and their children Archie and Lilibet elsewhere.

On the same day, his father, King Charles, laid a wreath at the Cenotaph in memory of all those who died fighting for their country – the first time he had done so as a British monarch.

Harry asked to have a wreath placed in his name at the Cenotaph in 2020, but was reportedly turned down.

Reports initially suggested that Buckingham Palace officials rejected his request. But sources later claimed that the Queen herself called in the belief that Harry should either be “in or out” of the institution and could not “pick and choose.”

In a statement posted on their Archewell Foundation website on Sunday, the Duke and Duchess of Sussex said: “We honor servicemen around the world. These brave men and women, as well as their families, have made tremendous sacrifices and epitomize duty and service.

“We are proud to partner with so many organizations that support veterans and military families, including: The Invictus Games Foundation, The Mission Continues, Team Rubicon, Scotty’s Little Soldiers, and The Greatest GENERATIONS Foundation. Today and every day, thank you for your service.’

Harry served in the army for ten years and undertook two tours of Afghanistan.

After leaving the armed forces, he founded the Invictus Games for wounded and injured servicemen and women, which has been running since 2014.

This year Harry also paid tribute to the families of children of members of the British armed forces.

In a message to charity Scotty’s Little Soldiers, Harry said they are in his ‘mind and heart’ and told them they are ‘not alone’.

In 2020, Harry and Meghan “recognized” Armistice Day in person by visiting the Los Angeles National Cemetery to pay their respects to fallen Commonwealth soldiers.

They were criticized for arranging a photographer to capture the moment when they paid their respects.

The following year, they both made a surprise visit to a New Jersey military base, where the Duke told the military that his years in the military “made” him.

For more stories like this, check our news page.

Get the latest news, feel-good stories, analysis and more