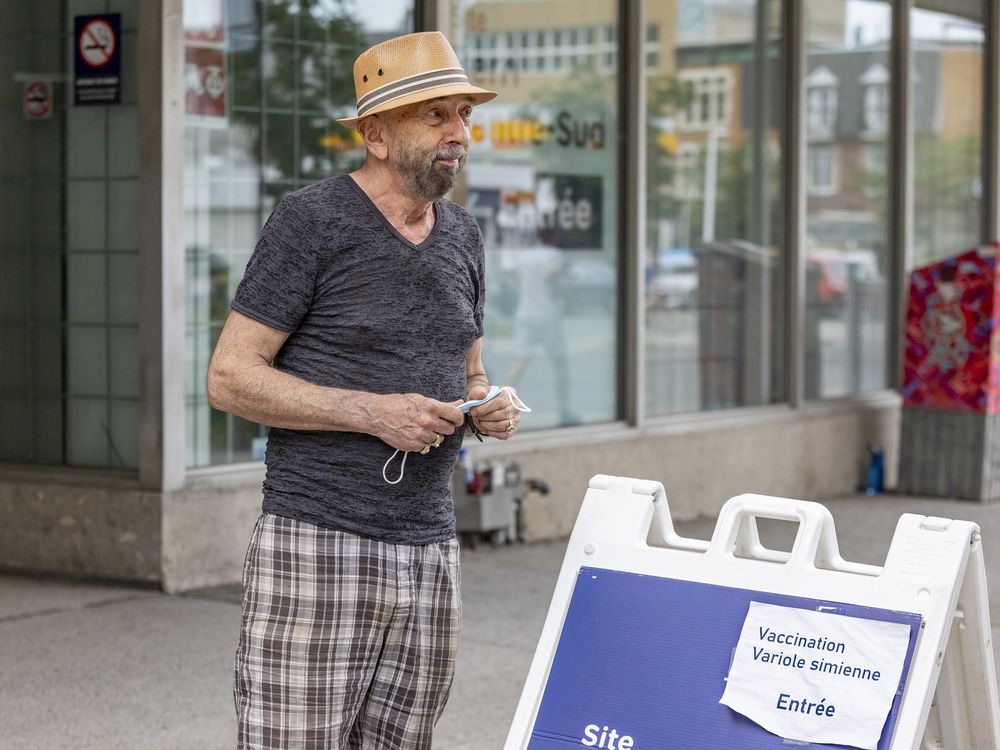 Raymond Boudreau heard about the monkey pox walk-in clinic in Santé Montréal from a friend, who heard about it from his hairdresser Wednesday afternoon.

“The barber said they were doing vaccines here; we didn’t even know,” Boudreau said of the clinic on Maisonneuve Blvd. E., on the edge of the Gay Village.

Boudreau’s friend convinced him to get vaccinated as well.

“He told me it was worth it,” said the 70-year-old. ‘I said, ‘I don’t know.’ I had been vaccinated against smallpox when I was younger. He told me it would be even safer to get (re)vaccinated, so here I am.”

Montreal is the epicenter of monkeypox virus in North America, with 126 confirmed cases as of Tuesday, accounting for 7.9 percent of the World Health Organization’s total of 1,600 confirmed cases in 39 countries this year, with 72 deaths.

All cases in Montreal to date have been in males, although the WHO has said the high number of cases in this group, as seen before, may be the product of “positive health-seeking behavior in this demographic”.

That behavior was on display Wednesday, as several Montrealers heeded the call of the ramped-up vaccination campaign by municipal and provincial health authorities, targeting “men who intend or have sexual relations with men.”

Pierre (who preferred not to give his real name), 55, looked neat as he left the clinic in a lime green suit. He wasn’t too concerned about catching monkey pox, but was vaccinated just in case.

“I’m not really the type to go to clubs and have casual encounters,” he said, “but when the opportunity comes, it’s more for that (the reason I came).”

Kyle, 32, knows friends of friends who have contracted the virus.

“It didn’t seem to be a good experience for them,” he said, “and from everything I’d read,[the vaccine]is safe and effective, so I thought I’d get it.”

Coming out of the clinic, he felt good about his decision and prepared for what the next few months might bring.

“I definitely feel more protected for the summer season,” he said. “There will be a lot of new people coming to town, a lot of confusion from everyone, so it feels good to be protected at that level.”

The virus appears to be transmitted through close, prolonged physical contact, Quebec says. The disease can be transmitted five days before symptoms appear and until all lesions are covered.

Danny Lapierre, 52, was vaccinated because “I’m in contact with a lot of people in the gay community, so there’s a potential danger,” he said. “And I have a stronger response to STDs (sexually transmitted diseases) — I know there’s no connection, but I didn’t want to be very sick.”

He wasn’t sure if he would feel any safer having been vaccinated, but he knew he had done the right thing.

“I did what I had to do, voilà,” he said, adding that he had been given a shot “to prevent it from spreading, for me and also not to spread it. I’m a good soldier. Tell me I must do, and I’m going.”

Michael (not his real name), 56, was vaccinated, not out of immediate concern, but out of caution.

“The number of cases is still very low,” he said, “but it can spread, so be prepared just in case it does.”

When asked if the threat of monkeypox changed people’s behavior, he replied that it was “restrictive behavior, I’d say.”

He hit the news on Tuesday evening when he learned about the vaccination campaign and was happy with his choice.

“Apparently (the vaccine achieves) full effect or almost full effect after a week,” he said. “That is very encouraging. It’s a breath of fresh air, just like the COVID vaccine.”