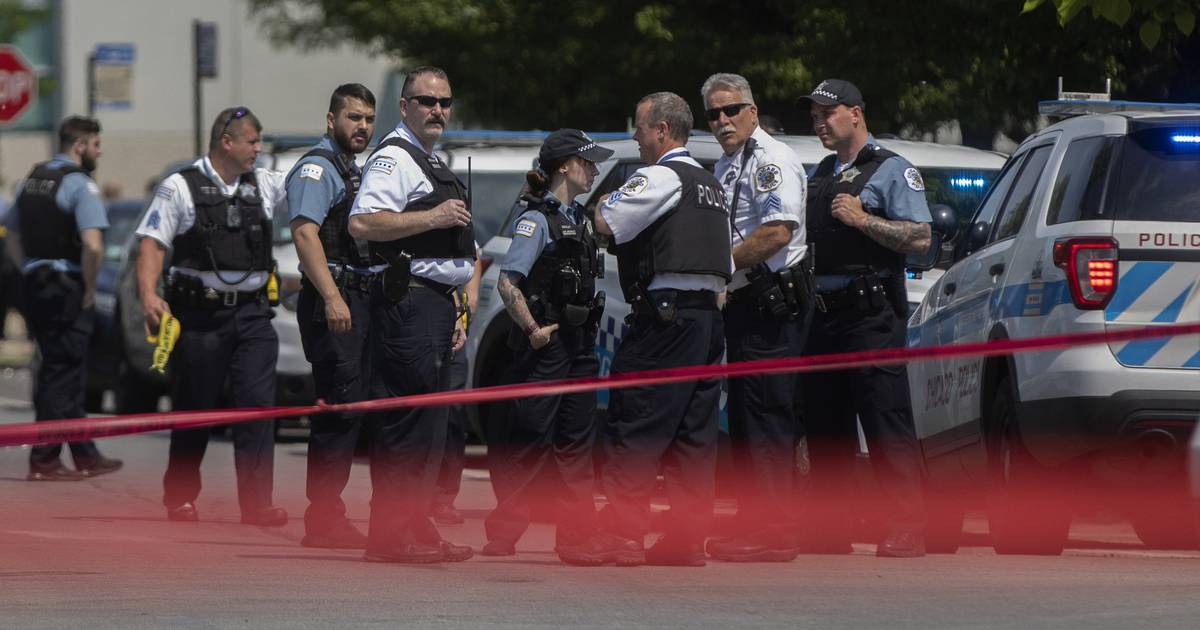 A Chicago police officer was shot and critically injured Sunday afternoon during a brief gunfight in the Englewood neighborhood on the city’s south side.

The unidentified male officer and a male assailant were both injured in the 69th and Sangamon Street area, authorities said.

The officer was taken to the University of Chicago Medical Center in serious but stable condition, according to Police Commissioner David Brown.

During an afternoon press conference outside the Hyde Park medical center, Brown said he spoke to the injured officer and his team. He described them as “shaken” after the second shooting in less than a week in the borough.

A female officer was injured during a traffic stop in Englewood on Wednesday. The next day, a CPD dog officer and a deputy US Marshal were wounded in a gun battle on the Northwest Side.

On Sunday, Brown told reporters that three uniformed Chicago police officers were driving an unmarked car on the 6900 block of South Sangamon Street around 2 p.m. when they made a traffic stop. The car they stopped turned into an alley with a dead end, he said.

BREAKING: A Chicago police officer from the 7th Dist. @ChicagoCAPS07 has been shot. The officer is transported to the University of Chicago Hospital. Condition unknown. PIO on the way to the hospital. Further details to follow.#ChicagoPolice

Brown said he did not know how many times the assailant was shot and police would wait to release details until the video of the incident had been reviewed.

Brown blamed “brutality” for a 500% increase in attacks on police officers over the past two years. “Violators are brutal in harming officers,” Brown told reporters.

In a statement posted on Twitter Sunday, Mayor Lori Lightfoot called on the US Senate to take action to end access to illegal weapons. “How many officers and residents must be victims of gun violence before we act?” said Lightfoot.

The second police shooting came as bad news for some Englewood residents hoping to avoid violence by the summer.

Asiaha Butler, co-founder and CEO of the Resident Association of Greater Englewood, noted that the shooting happened Sunday during “Wear Orange Weekend,” a nationwide campaign calling for an end to gun violence. “More than just events needs to happen,” she said.

Butler said new efforts are underway that would help bridge the gap between the police and the community and raise visibility and awareness among block clubs and neighborhood associations such as RAGE. But she said it is difficult to reach people who commit these kinds of crimes.

“I definitely think some bold strategies will have to be implemented,” Butler said. ‘I don’t know what those are. But I think we need to stop doing what we normally do and really think differently about how we deal with violence in the community.”

Darryl Smith chairs the Englewood Political Task Force, a group that mobilizes citizens for community action. “It’s a sad situation when a police officer is shot. You have good police and you have bad police,” he said.

Smith’s group is also working to bridge the communication gap between skeptical and fearful residents and local police officers. Smith’s group and other neighborhood activists worked to calm tensions between police and residents in 2020 following the death of George Floyd and the police shooting of Latrell Allen, which caused a stir and was linked to looting in the downtown area.

Shootings like Sunday’s, Smith said, are making it “more difficult for us to try and connect the community with the police because a lot of people are now angry when a person is shot by the police … but we need all the details.” know the ins and outs of all the circumstances surrounding this case,” he said.

Smith, who was in the southern suburbs when he learned of the shooting, said he planned to return to Englewood to talk to residents. “I’m going back to the neighborhood to try and get some peace there, because the suspect was shot too,” he said. “We need to make sure there’s no malicious intent on the part of the police and that the community is in turmoil, so I need to go back and put my ears to the ground and see what’s going on.”