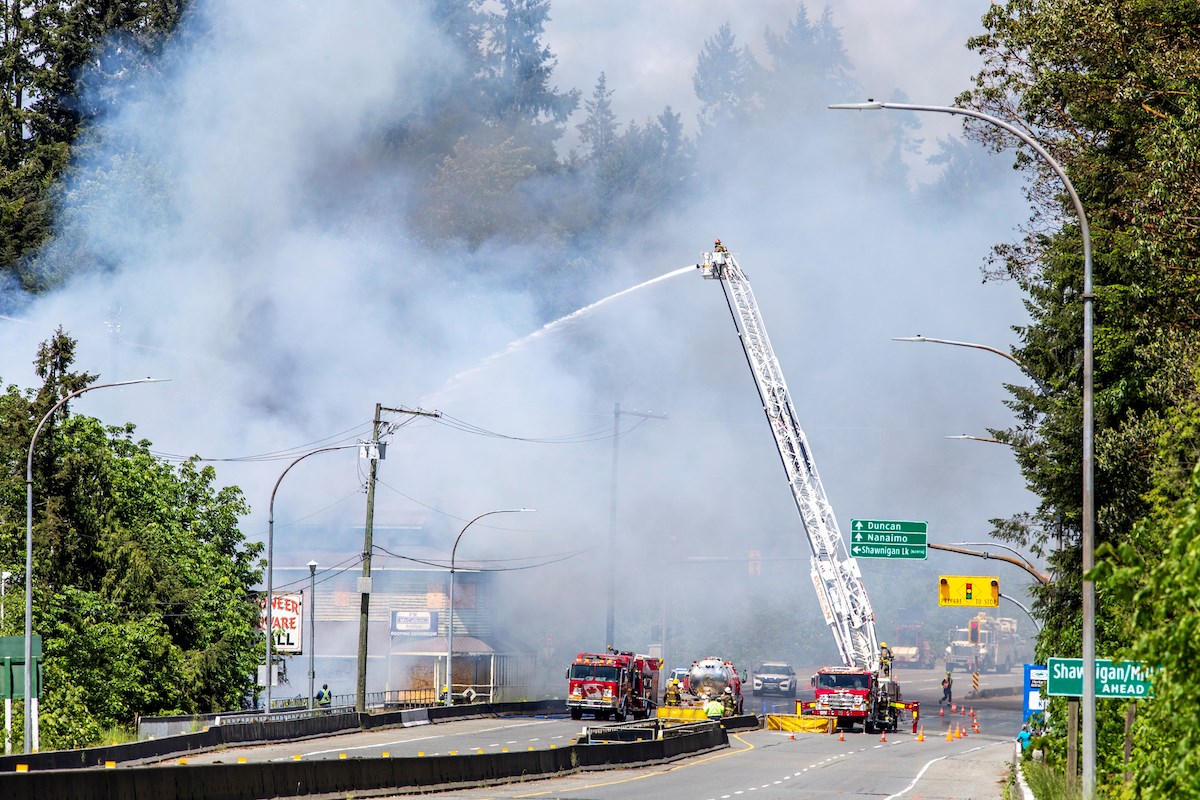 The part of the building closest to the highway was still standing Friday afternoon, but other parts had collapsed. Bystanders cheered as the crew demolished the remains of the building.

Much of the Pioneer Square Mall in Mill Bay collapsed Friday in the third fire in the vacant building in six months.

The part of the building closest to the highway was still standing Friday afternoon, but other parts had collapsed. Bystanders cheered as the crew demolished the remains of the building.

At 4 p.m. the fire appeared to be largely extinguished

Reached by phone at the site of the fire earlier Friday afternoon, Mill Bay fire chief Ron Beck said the building was “totally lost”, before adding: “It’s collapsing, I have to go.”

Heavy smoke billowed over the highway, which closed in both directions at Shawnigan-Mill Bay Road.

Firefighters with Malahat Fire Rescue and Cowichan Bay Fire Rescue were also on the scene.

From above, a fire truck could be seen shooting water at the building.

The Mill Bay Fire Department responded to similar fires in the 12,000-square-foot structure, built in 1972, in February and November.

Perdue said he and his two sons were walking to a funfair at George Bonner Elementary School when they saw the fire around 12:30 p.m. †

Bob Parent, a volunteer with the Mill Bay and District Conservation Society, said he was concerned about the runoff from the fire-polluting Shawnigan Creek.

“This is where the [coho] smolts are starting to come down . . . that we put there,” Parent said. “All of this could have been prevented if it had been brought down sooner.”

Lora Naherniak, who lives in Shawnigan Lake, agreed, saying the building “should have been torn down years ago.”

“I’d say it was like tinder, more than tinder.”

The fire could have been much worse, she said, if it had happened in warmer weather.

Tony Sullivan, who had been staying with his son in Mill Bay for a few months since his own house burned down, came out to see what was going on. He called the building an ‘thorn in the side’.

“Whoever owns it, they were taking it apart. It was an event like this waiting to happen, old tar paper and old wood stacked in one place,” he said.

Pioneer Square is part of a plot of land called Stonebridge Property in Mill Bay, which has been put together over three generations by the Garnett family.

The property was purchased by the Victoria-based Limona Group, a development company.

Limona has plans for a large master-planned community on part of the Stonebridge grounds, and plans to redevelop the 6.25 acres that Pioneer Square sits on.

Mike Baier, director of Limona, said the company has not been able to move forward with its plans for the site, although they have been years in the making.

He said a demolition permit was issued in the spring for the restaurant building south of the site behind Pioneer Square. That restaurant has since been razed to the ground, and Limona is in the midst of a “nasty” environmental cleanup, he said.

“Now we have a nastier thing with” [Pioneer Square]’ said Baier.

Baier said Limona had crews working to finish Pioneer Square but had to spend up to six figures on site security because every time the property was boarded up someone would break in and make a mess or start a fire. founded.

He said the company has had people on the site three to five times a day to thwart the break-ins.

— With a file from Pedro Arrais