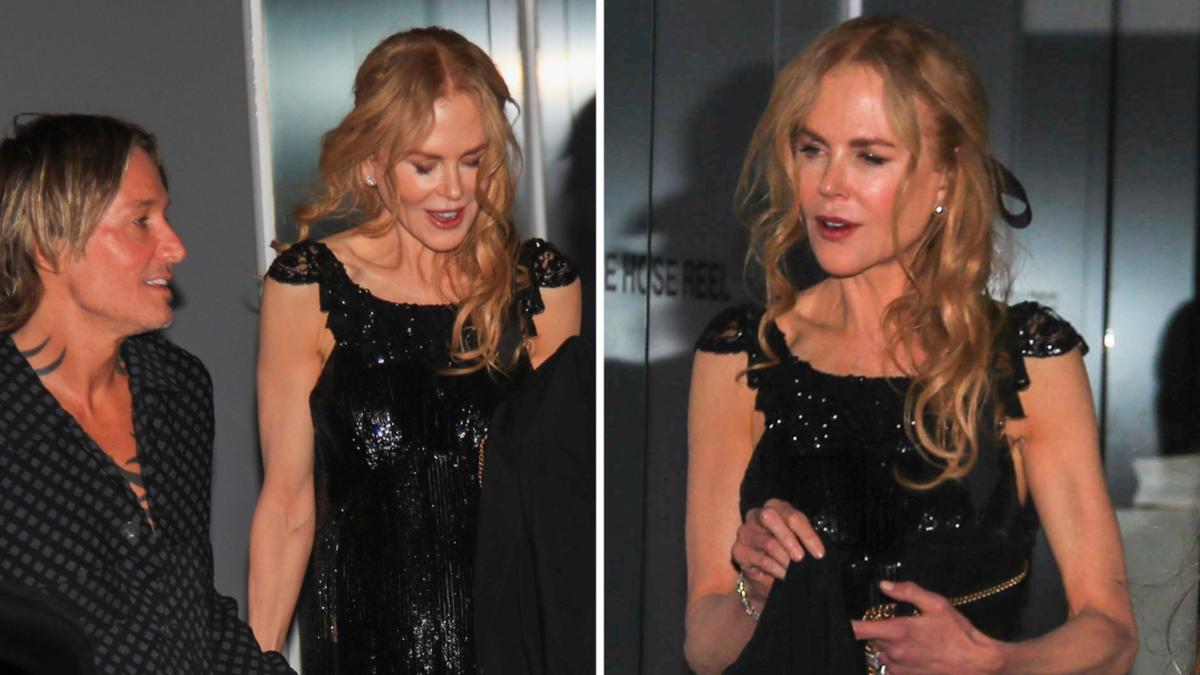 New photos have surfaced of Nicole Kidman and her husband Keith Urban attending a glamorous party in Sydney just days after they landed in Australia.

Kidman, 55, looked stunning in a shimmering black beaded long dress as she and Urban attended Vogue Australia’s soiree at Bondi Icebergs on Tuesday.

WATCH THE VIDEO ABOVE: Nicole Kidman and Keith Urban leave the Vogue party

The VIP party was held in honor of the magazine’s new editor-in-chief, former fashion director Christine Centenera, who will replace Edwina McGann.

Kidman paired her low-back semi-sheer dress, which showed off her gym-toned arms, with black stiletto heels, diamond earrings and a matching diamond bracelet.

The Being the Ricardos star wore her hair in a half-up, half-down style with a black bow at the back and completed her look with glossy red lipstick.

A photo of Kidman and Urban with Centenera and Edgerton posted to Vogue Australia’s Instagram account showed off the intricate detail in Kidman’s dress, which was sheer around the waist and legs.

“The GOAT (Nicole Kidman) as a witness of honor,” wrote one admirer.

The couple arrived in Sydney on Sunday with their daughters Sunday (14) and Faith (12).

After picking up a very Aussie item – a pack of Arnott’s assortment of biscuits – they headed for the home of Kidman’s 81-year-old mother, Janelle, on Sydney’s north shore.

According to New Idea, the family will spend Christmas Day at Balmoral Beach, along with Janelle, Kidman’s sister Antonia and her six children, and Urban’s mother Marienne.

“My mom just turned 80 and Nic’s mom… who knows how many Christmas parties we’ll ever have with anyone, but mostly with our moms,” Urban told the outlet.

“(We) really cherish the opportunity to spend Chrissy with (our mothers) and our family in Australia.”

Kidman’s mother has reportedly been unwell since late 2021.

The actress spent time with Janelle in December 2021 and January 2022 when she was in Australia promoting Being the Ricardos.

Speaking on the Fresh Air podcast in January, Kidman said the family had “taken care of” Janelle.

“We’re here primarily to take care of my mother and have her surrounded by her grandchildren,” Kidman said.

Both Kidman and Urban have lost their fathers, Anthony Kidman and Bob Urban, in the past 10 years.

Detail in images of Princess Mary reveals what she ‘really wants’