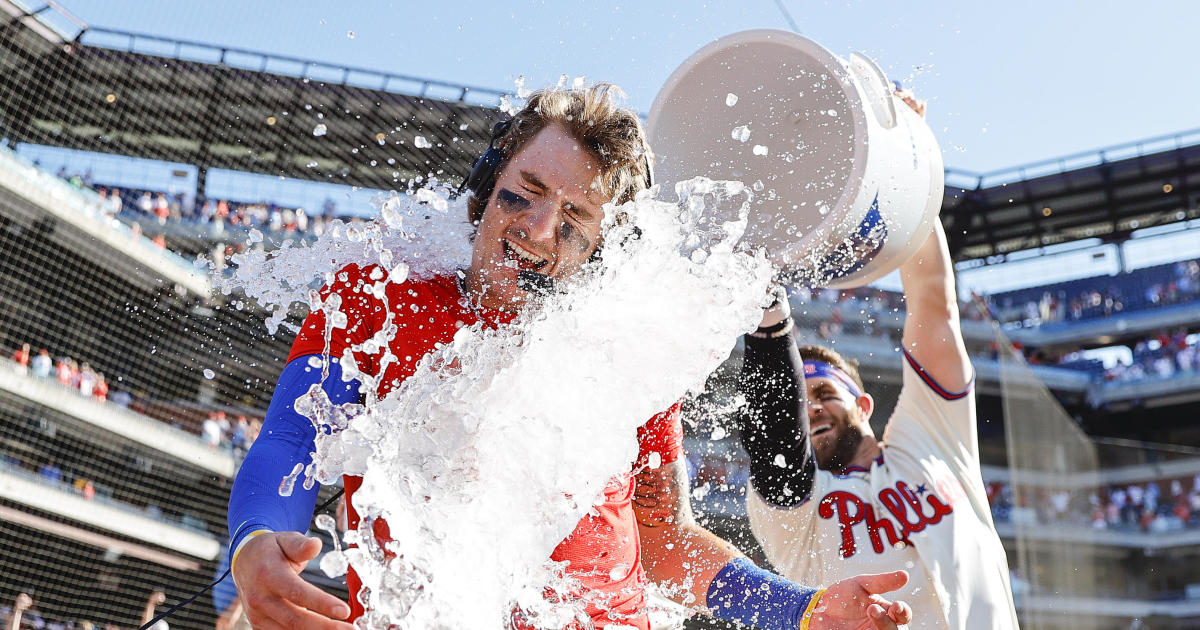 Bryson Stott hit a game-winning, three-run homer with two outs in the ninth inning after Bryce Harper tied the score with a grand slam in the eighth, and the Philadelphia Phillies rallied for a 9-7 win Sunday that crashing Mike Trout and the Los Angeles Angels to their 11th consecutive loss.

It was the fourth straight win for the Phillies, who have won all three games under interim manager Rob Thomson since he took over when Joe Girardi was fired on Friday. Philadelphia defeated the Angels 26-9 as it won the three-game series.

Trout batted 0 for 3 and is hitless in his last 26 at bats, the longest drought of his award-winning career. The three-time MVP did walk and scored a run for the Angels, whose last win came on May 24.

Born in nearby Millville, New Jersey, the nine-time All-Star finished the series 0 to 11 with four strikeouts against his home team and is 2 for 20 with seven strikeouts in five Philadelphia career games.

The Angels are on their longest losing streak since an 11-game slide in August 2016.

After forfeiting a 6-2 lead in the eighth, the Angels led 7-6 in the ninth against Corey Knebel (2-4) when Matt Duffy made up for a costly error on third base with a two-out RBI single.

Singles by Alec Bohm and Didi Gregorius off Los Angeles closer Raisel Iglesias (1-4) put runners on first and second base with two outs. Angels manager Joe Maddon, who called up Iglesias with one out in the eighth, brought in Jimmy Herget against Stott. Connecting with a full-count curveball clocked at 74 mph, the rookie sent the home team — and the crowd — into a raucous feast as he cleared the wall in right field.

It was the second homerun of his career for Stott, who also went deep in Philadelphia’s opening 10-0 win on Friday-evening.

Harper also doubled, Bohm had three basehits and Nick Castellanos and JT Realmuto led to runs for the Phillies.

The Angels looked set to finally win a game as they went into eighth with a 6-2 lead.

Aaron Loup started the inning and gave up a leadoff single to Odubel Herrera, which was followed by an error by Duffy, who threw the ball into the outfield while trying to force Herrera onto second base on a grounder by Johan Camargo. With the bases loaded, one out and the Angels still leading by four, Maddon brought in Iglesias to try a save of five.

Iglesias, who made his first appearance since May 27, struckout Rhys Hoskins and then had Harper in a 0-2 hole. But the reigning NL MVP worked the count back to 3-2 before launching an 89 mph second-deck pitch into right field for his 13th homer of the season and sixth Grand Slam of his career.

It was the second blown save in 13 chances for Iglesias.

The Angels went ahead with five runs in the fourth off Kyle Gibson.

Duffy’s leadoff single, Shohei Ohtani’s double and a walk to Trout loaded the bases with no outs. Walsh’ single to the right scored two runs, RBI singles by Adell and Suzuki added two more runs and it was 5-0 after Marsh scored on the bunt by Tyler Wade.

The Phillies got several runs back in the fifth off starter Patrick Sandoval on a sacrifice fly by Castellanos and Realmuto’s RBI groundout.

Sandoval was taken up with two outs in the fifth and gave up two runs on four hits with four strikeouts and four walks.

Phillies: INF placed Nick Maton (right shoulder sprain) on 10-day injured list, retroactive to Saturday, activating Gregorius (left knee sprain), who has been sidelined since May 5. Gregorius replaced Camargo in the ninth inning after Camargo appeared to injure himself finishing first base in the eighth.