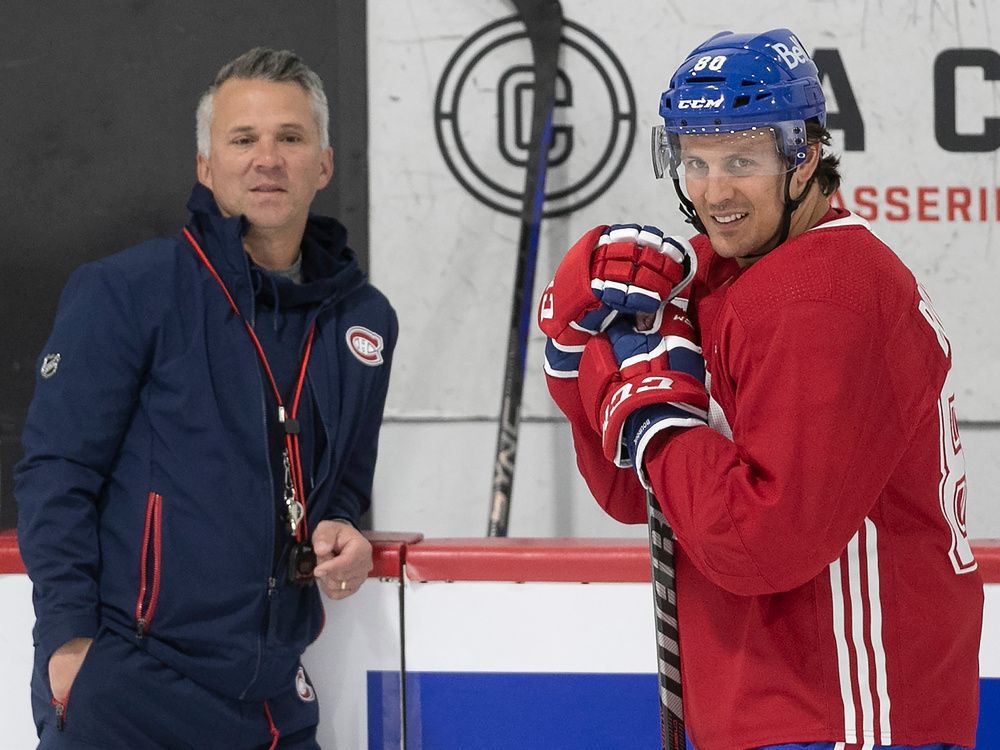 The Canadiens have reached the halfway point of their training camp and this is when things start to get serious.

Coach Martin St. Louis finds himself in uncharted territory as he tries to put together a puzzle that currently has too many pieces. He is approaching a week where the Canadiens will play four games in six nights, starting with Bell Center dates against Toronto on Monday and Ottawa on Tuesday. The challenge will be to keep bodies fresh and healthy while having an NHL-ready roster for the final two games Thursday in Gander and Saturday in Bouctouche, NB

The next issue of HI/O: Montreal’s Road to the Cup will be in your inbox soon.

Some decisions will be easy.

The goaltending is set with Jake Allen, who signed a two-year extension on Saturday, and Sam Montembeault. Cayden Primeau had some good moments in Saturday’s 5-4 loss in Ottawa, but his development will continue in Laval.

Justin Barron, a 20-year-old acquired in the trade who sent Artturi Lehkonen to Colorado, had the inside track for a spot on the defense because he is a right-handed shot, but he was able to start the season in the top four. He scored a goal in Ottawa and was a plus-3 with three hits and two blocked shots.

With Joel Edmundson on the sidelines with back problems, Mike Matheson, David Savard, Chris Wideman and rookie Kaiden Guhle are guaranteed a spot on the list. Corey Schueneman and Jordan Harris have the inside track in the other two spots, but a strong performance from the physically imposing Arber Xhekaj could earn him a spot on opening night.

Never drafted at any level, Xhekaj entered a rookie camp determined to “prove I’m not a meathead” and he has impressed with skating skills not usually associated with a six-foot-tall player and 238 pounds.

Up front, St. Louis has all the pieces he needs to put together four decent lines and he’ll usually figure out where the pieces fit this week.

While Jake Evans made his bid for a permanent two-goal center job in Ottawa, there were significant developments regarding that position in Montreal.

Nick Suzuki returned to practice wearing a regular jersey and lined up between Cole Caufield and Josh Anderson on what will be the team’s No. 1 line.

Sean Monhanan, who is recovering from hip surgery, took center stage between rookie Juraj Slafkovsky and Brendan Gallagher on what could be a number 3 line. Christian Dvorak will start as the No. 2 center and Evans will compete against Kirby Dach and Monahan for a center position. The most likely scenario is that Evans is on the wing on Dach’s line, where he would be available to take important face-offs.

This will be an important week for Slafkovsky. Last week, general manager Kent Hughes described the rookie’s training camp performance as “unbelievable” and said the No. 1 overall pick in this year’s draft could start the season in Laval.

Veteran Jonathan Drouin will also be featured this week. Drouin was disappointing on Saturday when he made his preseason debut. Drouin, whose last three seasons ended with wrist surgeries, had one shot on target, one blocked shot and a takeaway. He lost his only faceoff and finished at minus-1. It’s early days, but Drouin, who is in a contract year, has a lot to prove.