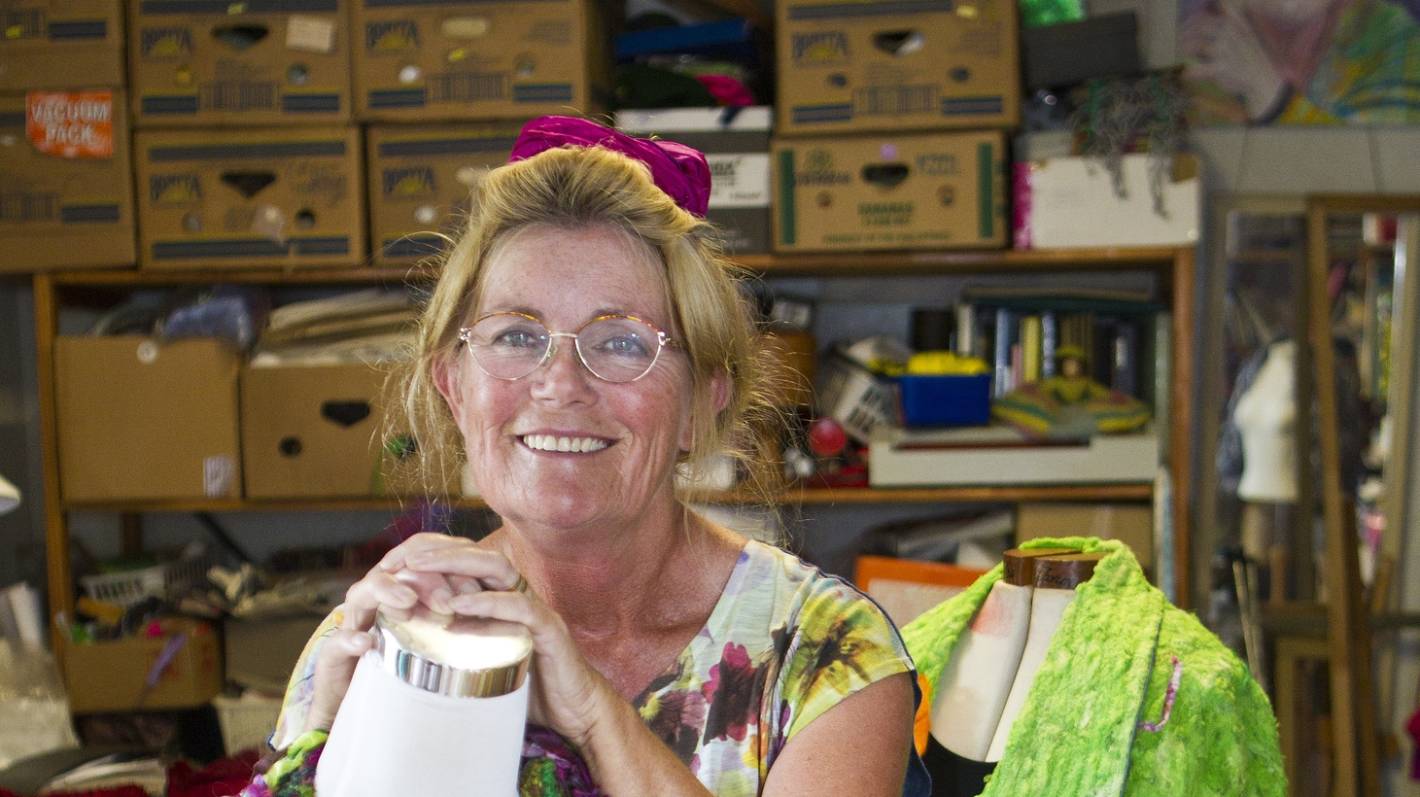 In early 2013, Yanny Split experienced an artistic triumph. Yanny’s involvement in New Zealand fashion design and wearable art dates back to 1987. While numerous shows, fashion parades and awards had been won, an exhibition devoted exclusively to her work at the Waikato Museum was an absolute highlight of her career. The Wonderful Wearable Art of Yanny Split saw seven of the 26 pieces of clothing she donated to the museum. The balance was carried during a fashion parade prior to the opening of the exhibition, a preview of infinite colors. Yanny always preferred her art to be seen on the human body.

Leafa Wilson, the Waikato Museum’s visual arts concept leader at the time, declared Yanny a “Waikato treasure” and a “one-of-a-kind designer and textile artist”. Doris de Pont, her friend and former business partner, says that Yanny was “always cheeky” and “had the courage to just do what was necessary” to fulfill her ambition. Humble beginnings, linguistic eccentricity and Huntly’s unlikely hometown were no hindrance.

Jannie Groeneweg was born on December 11, 1947 in Bovenkerkerpolder, North Holland, the second of 12 children of Aart Groeneweg and Antje Groeneweg (née Rottine). They were a traditional Orthodox Protestant family, challenged by the rigors of post-war life, crammed into what Yanny’s brother Anita describes as a “house much too small”. The sisters were forced to sleep together in a bed in the attic. When Yanny was ten, the family moved to Amstelveen, near the Amsterdam forest. Once again the accommodation struggled to contain 14 people.

Yanny’s first piece of art, a felt cutout stitched onto fringed burlap, was made at the age of 10 in a church craft workshop.

After completing her primary education, Yanny was asked to choose between attending regular high school and a “ladies school”, popularly known as the “spinach academy”, which taught cooking, pattern making and sewing. She chose the latter. Less suited to her burgeoning talents were typing classes, where Yanny determined that a career in secretarial work was not for her.

She left school at the age of 14 and started cleaning houses. At the age of 15, Yanny worked in a bakery, where she learned confectionery. She continued her education at night school. Lessons in window dressing and commerce led to work in shop assistant and store management. In 1968 she got a job as a window dresser at Vroom en Dreesman, a large department store and in that capacity would pass for C & A, a fashion department store. After managing a café and a bar for a while, she followed further evening training in floral art in 1976 at her own company in Amsterdam South, where she sold flowers and plants and took care of the plants in the surrounding companies and institutions.

Yanny’s first marriage necessitated her selling the floristry business and taking a job as manager of a sports complex. Her divorce provided focus and momentum. In 1981, aged 35, she enrolled at the Free Academy, an art school, and discovered her craft. A year of study in The Hague was followed by four years in Rotterdam, where famed designer Cargelli proved to be a supportive mentor, beginning a personal and professional friendship that would continue for decades to come.

The fashion design course was comprehensive and included preliminary design, pattern drawing and cutting, painting on silk, appliqué, knitting, millennium and the organization of fashion parades. There were trips to Paris and holidays in the South of France.

In 1985, Yanny and five other students from the Free Academy founded a fashion cooperative in The Hague, Studio Split, as an outlet for their respective work. Here she met visiting New Zealand fashion designer Doris de Pont. While the company was formally a co-op, Yanny, says de Pont, “the driver — organizing promotions like ‘a day at the races’ — where we all dressed our best and paraded around as a group — was determined to get attention. ..[with] flyers at hand to familiarize our new customers.’ Fashion shows at the beach pavilions in Scheveningen and a group show with 120 outfits at Artline, a dealer gallery in The Hague, were other Yanny initiatives that were carried out on a large scale.

Studio Split was the star that shone twice as bright and only lasted a year. Yanny’s work didn’t sell as well as her partners’. “My ones were just a little far off,” she told the Waikato timesDenise Irvine in 2013. It was clear to her that she would not survive as a seamstress.

Fulfilling a promise that she would emigrate if she wasn’t happily settled in her native country before the age of 40, Yanny moved to New Zealand in 1987. With the move came the formalization of her professional name. Reasoning that Jannie Groeneweg was too difficult for New Zealanders to pronounce correctly – and not having the desired impact – Yanny changed the spelling of her first name and appropriated Split from her studio to serve as a middle name.

Initially, Yanny teamed up with Doris de Pont at a fashion studio in Auckland’s O’Connell St, but again came to the conclusion that “the commercial side of the clothing business didn’t appeal”. More interested in “making a statement through design”, she combined a part-time job in Candy Textiles’ tasting room with designing, participating in award ceremonies and “experimenting with new ideas”. Subsequently, work continued with Singer, selling and demonstrating sewing and knitting machines, subsidizing Yanny’s art, as well as part-time work in various Auckland restaurants.

Yanny immediately made an impression at the Benson & Hedges Fashion Design Awards, her creations nominated in 1988, 1989 (twice) and 1990 (three times). In 1990 she won the Wool Section for, as de Pont describes, “an outfit with a pagoda silhouette; wide trousers, an A-line tunic and a short jacket – all in white wool”. There was much irony in the fact that “not a hint of color or embellishment” was evident.

Throughout the 1990s and beyond, Yanny’s work continued to appear at the Benson & Hedges awards – later renamed the New Zealand Smokefree Fashion Awards – with a total of 13 nominations. From 1991 to 2005, there were 33 accepted entries for the World of Wearable Arts contest, including six garments in 1995 alone, both of which are probable records. In 1993, she won the Wool Section with a multicolored machine-knitted outfit inspired by reggae icon Bob Marley.

Yanny’s successes in awards and exhibitions across the country are too numerous to list. Aside from prestigious exhibitions in art galleries as far away as New Plymouth, Christchurch and around Auckland, her fashion parades graced museums, nightclubs, race rallies and once – infamously – a nudist club. A parade in central Auckland for the royal visit of Queen Beatrix of the Netherlands in 1992 was a particularly memorable tribute to her homeland. In 2006, Stitch, a book about contemporary New Zealand textile artists, devoted a chapter to Yanny’s work.

Yanny met Alan Coates, an antiques dealer, at an Auckland nightclub. The pair’s instant rapport endured the discomfort of Alan’s imminent departure abroad, with Yanny, after a moment’s hesitation, choosing to collect him from the airport. Their wedding in 1994, in Auckland, not far from their hometown, a warehouse large enough for both of their professional pursuits, was an extravaganza of color.

To the surprise of many, Yanny and Alan chose to settle in Huntly, which saw significant downsizing. After teaching fashion design part-time as a tutor at Unitec, Yanny went on to teach in the Waikato, teaching summer classes at Raglan Art School and at Huntly College, eventually becoming the adult education coordinator for the latter. She attended workshops throughout the region and set up an art trail and art events in Huntly. Yanny was a trustee and deputy chairman of the Arts Development Trust, Arts Waikato. In 2010 she received Arts Waikato’s Outstanding Service Award.

Yanny, who never fully mastered the English language, was assisted in her writings, as in all her endeavours, by Alan, a more than helpful editor. While what Doris de Pont calls her “Yannyisms” often entertained friends and acquaintances alike, she never let herself be limited by her imperfect command of the language. “Despite her idiosyncratic use of words,” says de Point, “her idiosyncratic spelling and pronunciation – you always understood what she meant”.

In the words of one of her sisters, Yanny was a “passionate maverick, creative, energetic, headstrong.” [and] impetuous”. In her life, as in her art, there was “always movement”.

Yanny Coates died on December 4, 2022. She is survived by her husband Alan and a large family in the Netherlands.